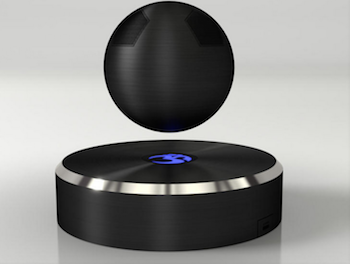 Normal bluetooth speakers just not doing it for you anymore? How about one that floats?

The Om/One is a speaker that literally defies gravity. It consists of a magnetic base and a spherical speaker, but what may be the most interesting aspect about the Om/One is that the speaker levitates above the magnetic base. It spins in direct response to whatever audio happens to be playing through it, and the speaker can be removed from its position in the air in order to be used as a portable speaker. It also includes a microphone, making it usable for phone conversations as well. The Om/One comes in three flavors- black, white, and disco- and battery life is estimated to last around 15 hours.

The device is being developed by a company called Om Audio, creator of the Mantra line of speakers, and is still in the prototype stage. Om Audio has started a crowdfunding campaign in order to cover the cost of production, and shipping will begin in December of this year. The amount to pledge in order to buy your own is $179, and $329 will score you two if you happen to be so inclined. Having started today (and since the writing of this article) the campaign has already surpassed its $100,000 goal by $3,000. There are 49 days left to make a donation, so there is still plenty of time to score this incredible piece of technology.

David Devillez, CEO of Om Audio, has history in the Navy developing sonar technology. “The first time I saw the device, I was astounded like everyone else,” he said in a promotional video for the device. “We recognized the potential for Om/One. We put all other product development projects on hold.”

Plan on purchasing an Om/One for yourself? Let us know in the comments!

Far Cry 4 Preview – What Will You Find in Shangri-La?