God of War III is a special kind of spectacle. Plowing through it in a couple unbroken four-hour sessions last week, I experienced big-budget game design at its finest: incredible graphics, enormous set-pieces and the computing horsepower to make these pyrotechnics seem effortless. You literally leap from one cavernous environment to the next without so much as a hiccup in the frame rate, and if you never have the misfortune of dying, you could count the number of loading screens you’re forced to sit through on one hand. It’s eight hours of some of the finest single-player gameplay of this console generation, coupled with the most impressive programming the PS3 has seen to date.

But as ferocious and epic as Sony’s latest system seller is, it’s also obsolete, a relic of an ancient design philosophy that is simply too big and too cumbersome to dominate the gaming landscape as it once had.

At least that’s the message you could take away from Michael Pachter’s comments regarding his meeting with EA’s Visceral Studios head honcho Nick Earl, in which Earl enunciated EA’s strategy of “premium downloadable content.” In this case, “premium DLC” doesn’t refer to a $15 map pack, but an ongoing strategy wherein EA sells shorter versions of their games for $10 to $15 as a precursor to their full-price, boxed retail releases. Apparently, Earl’s presentation was strong enough that Pachter completely reversed his view of the company’s dismal financials, including its unprecedented billion dollar loss in 2009. “We’ve been wrong about this stock for five years,” Pachter wrote. “This time, we think the company is on the right path.”

I’m not normally one to take Pachter’s opinion at face value – in fact, I’d argue his near constant presence in gaming blog newsreels is more a result of shrewd self-promotion than the accuracy of his predictions. And for all that he purports to know about the inner-workings of the game industry, it seems like he has a ways to go when it comes to understanding the actual process of game design. (Case in point: his facepalm-worthy prognostications about how the firings of Jason West and Vince Zampella, Infinity Ward’s CEO and Chief Technical Officer/President, respectively, could affect the studio’s future development efforts.) 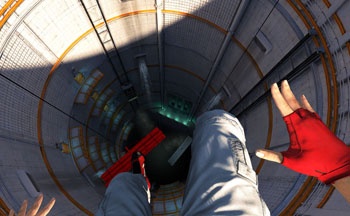 But when it comes to price-points and earnings reports, Pachter is on his own turf, and his musings, for better or worse, don’t just point to a hypothetical future of smaller, cheaper games, but subtly nudge publishers in that direction as well. Even though many gamers are fond of accusing megapublishers like Activision and EA of being notoriously risk-averse, they’re still playing a high-stakes game with AAA development: When they win, they win big, but they lose far more often. Last year, the company released 31 games that sold over a million copies each, but they still found themselves a billion dollars in the red at year’s end. Pachter’s enthusiasm for EA’s “premium DLC” has nothing to do with the games themselves; like the 1,500 layoffs the publisher announced last year (or “lower headcount,” as Pachter artfully puts it), he’s into the idea because it means high-cost, high-profile failures could be averted before they manage to drag the publisher’s financials down with it.

In Pachter’s eyes, this arrangement is a win for both gamers and developers. Consumers are taking a risk when they purchase an eight- to ten-hour game at $60, after all, so by releasing a preliminary two- to three-hour version for $10 or $15, gamers have a chance to sample the goods far beyond what a 15-minute demo would allow; then, when the full version comes out, they’ll already know whether it’s worth their money. And “premium DLC” gives developers a chance to adjust the full retail version of a game based on early feedback from actual paying customers. “Imagine if Brütal Legend or Mirror’s Edge had been released this way, so that EA could have adjusted the follow-on games to address criticisms,” Pachter told Kombo in a follow-up interview.

That’s the crucial fallacy of “premium DLC” – that it will somehow make full-price AAA games better. Instead, by Pachter’s own admission, the concept’s main purpose is to cut costs by making AAA games fewer. Are we really supposed to believe that a poor consumer response to “premium DLC” of Brütal Legend or Mirror’s Edge would spur EA to double down on these games, effectively pouring good money after bad? Or would the publisher simply write them off as failed experiments and save millions in the process? I know how Pachter and EA’s stockholders would want the company to act.

This is our not-too-distant gaming future: a world ruled not by a handful of AAA behemoths whose impending release causes lesser games to scamper for the trees, but by packs of shorter, nimbler games with a much smaller economic footprint. “Premium DLC” is just another sign that the mass extinction event has already happened. Now all we can do is wait for the dust to settle.

Jordan Deam was hoping to work more dinosaur metaphors into this piece, but ran into a deadline.