It’s officially StarCraft week at The Escapist, which means that in addition to clocking a couple hours each night with the StarCraft II beta, I’ve been reading, editing and yes, writing about Blizzard’s latest soul-sucking time-sink disguised as an RTS. Issue 248 of our weekly magazine contains an interview with StarCraft II‘s lead designer, a sort of coming-of-age story about the Zerg, a profile of the best StarCraft player that ever lived and a cautionary tale from a StarCraft also-ran. But while each article covers a different facet of the StarCraft experience, the latter two got me thinking about a much broader topic: the difference between a game and a sport.

Reading Jack Porter’s piece about the toll competitive StarCraft play can take on your psyche transported me back to my college years, when I was obsessed with an altogether more primitive strategy game: chess. Aside from our platform of choice – a modern PC in Porter’s case, a slab of patterned wood in mine – our stories played out in a similar fashion. We both became mildly obsessed with a game that revolves around the memorization and application of a nearly infinite array of patterns, to the point that we were practically haunted by what should have been an enjoyable way to pass the time. When I moved out of my freshman dorm and away from my closest competitor, I pretty much stopped playing and haven’t looked back since.

Brett Staebell’s article, on the other hand, offers a portrait of a more determined competitor, one who went on to become a sort of StarCraft Grandmaster: Lim Yo-Hwan, better known as SlayerS_’BoxeR’. BoxeR practiced religiously for years until he reached the top of the professional StarCraft scene, becoming a high-profile and well-paid gaming celebrity in the process. It’s an extraordinary achievement that hasn’t been replicated since – one could argue that BoxeR wasn’t just the pinnacle of competitive StarCraft, but of e-sports in general.

But one commenter wasn’t as impressed with BoxeR’s success as I was. Xersues laughed at the very idea of “e-sports,” suggesting that BoxeR and his cohorts were taking the game entirely too seriously:

Anything that a computer has a chance of doing better I can’t ever claim to be a “sport” or even “pro” at. If Blizzard really tried I bet they could make an ultimate A.I. that would just be so cheap even making it follow the rules it would win most tournaments itself. It would micro faster, move faster and space out the units faster. Script in some “pro-strats” and I’m sure it could win most of the time. 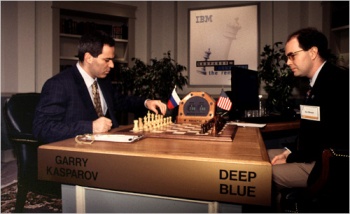 It’s a point I hadn’t considered until then, and it actually makes a lot of sense. In chess, a game of pure strategy without the need for reflexes, the evidence suggests that computers don’t have much of an advantage (if, indeed, they have one at all). When Gary Kasparov played Deep Blue in 1997, he lost his six-game match by a single point, besting the powerful mainframe computer once and drawing three times (and that was after soundly defeating the previous iteration of the hardware). It’s a close call at this point, but for the time being, it appears that the human intelligence is still a match for its artificial counterpart.

But StarCraft requires more than deep strategy – in addition to picking the right move at any given moment to give yourself an advantage over your opponent, you must execute dozens of individual commands every second to make sure you’re exploiting your available resources to the fullest extent possible. The best players register roughly 300 to 400 actions per minute, meaning they’re constantly selecting between their various units and structures and picking the best course of action, whether it’s hatching a few more Mutalisks, executing a psionic storm on a cluster of enemy troops or shifting a group of tanks into siege mode. Human intelligence simply isn’t enough – this is the computer’s terrain, and without the need of a mouse or keyboard, an A.I. program could execute these actions pretty much simultaneously.

Why, then, aren’t we watching StarCraft Battle Reports of matches between rival A.I.s rather than the human matches we see now? Wouldn’t the highest-level play come from combatants who could focus solely on the game’s strategic elements without having to worry about the physically actions required to execute those strategies? In short, why doesn’t StarCraft have its Deep Blue, an A.I. so dominant that it leaves the best players in the world in its dust?

I suspect it’s because Blizzard knows that such a program would virtually dismantle the competitive StarCraft scene as it exists now – that, and A.I. matches simply aren’t as much fun to watch. Human players have stories, like the one Staebell tells in his piece this week. They have emotions – like pride, anger and, especially in StarCraft‘s case, panic – that make them inherently more interesting to spectators. But, strictly on machine terms, they do not have über-micro.

So, is StarCraft a sport (or “e-sport,” as it were)? I’m still not sure. But if it is, it may be one where actual human players would be relegated to the minor leagues if some enterprising programmers decided to try to create an unbeatable opponent – and there’s little point in playing when the best you can hope for is second place.

Jordan Deam does not have über-micro. In fact, he doesn’t even have unter-micro.