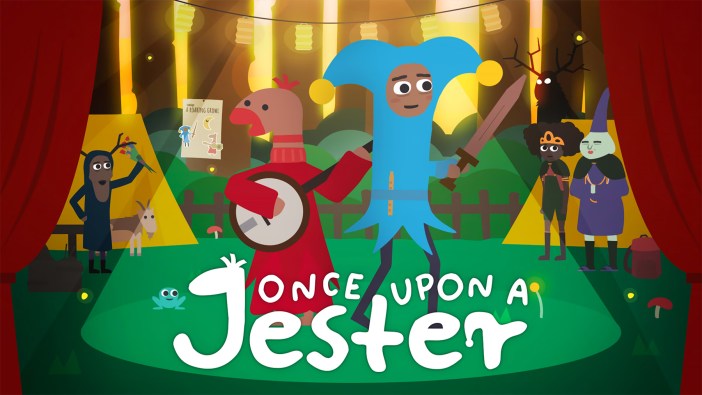 Very rarely, a game delivers an experience you can only have through this particular interactive medium. The recently released Once Upon a Jester is one such example, putting you in the shoes of both the actor and the audience for an unforgettable night of improv theater.

The entire setup for this is a wonderfully silly affair. You play as Jester, a petty thief who is joined along the journey by his best friend, fellow criminal and formidable stage partner Sok. And yes, Sok does look like a sock puppet. It’s glorious.

Now back to our protagonist’s plot. Their plan is to steal a valuable jewel during the Royal Theatrical Spectacle, using their own performance at the event as a distraction for their heist. But before Jester and Sok may grace the royal stage, they need to impress the citizens of various small towns with their improv comedy performances. 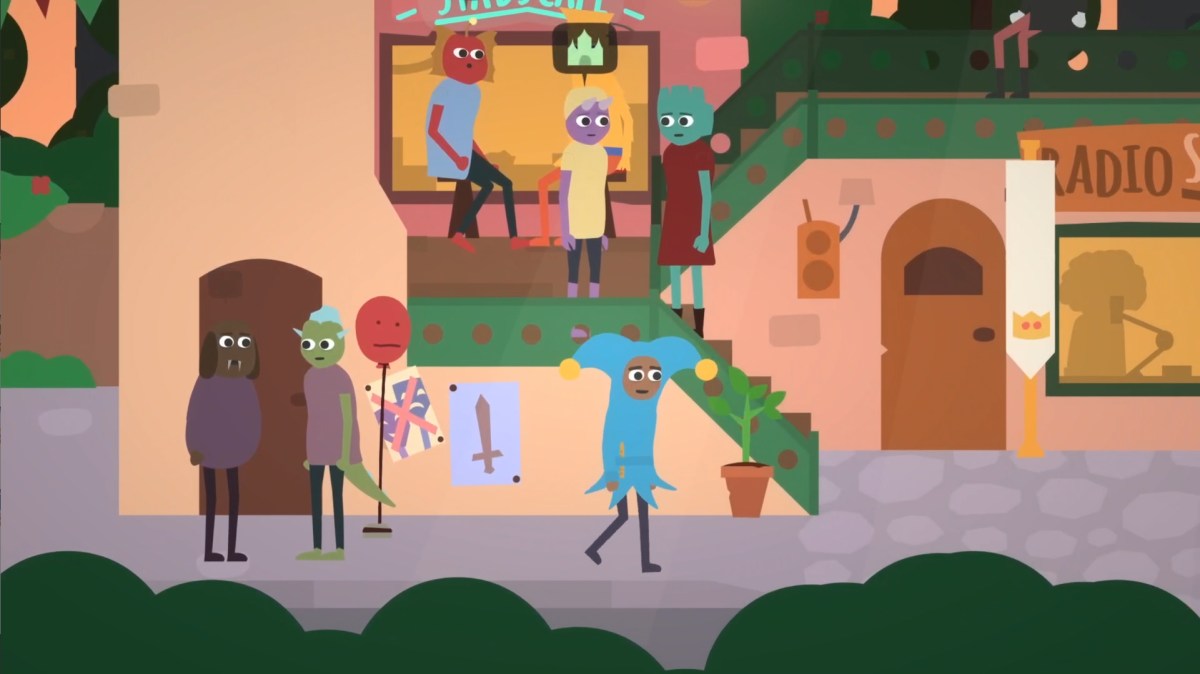 That is where the core gameplay mechanic begins to come alive. By the game’s end, you have three unique play concepts to pick from that will frame the overall plot the show will follow — slaying a dragon, crafting a statue, and a journey of self-discovery. But the type of genre that takes on is based on the choices you make during your time on the stage.

Before a show, you’ll explore your current location in search of clues for what type of entertainment the crowd is wanting (or not) that evening. Will it be a lusty romance? A daring drama perhaps? Maybe even a musical!?

During a show, Sok or Jester will set the scene and give you a limited set of branching options that match one of the six available genres, in order to “yes, and” your way through the performance. Sometimes you won’t be able to give the crowd what they want, so you just have to try to give them something they won’t hate instead. And that is the magic that makes this game so damn charming: You are literally on the edge of your seat with the audience, waiting to find out how your choices will play out in real time. 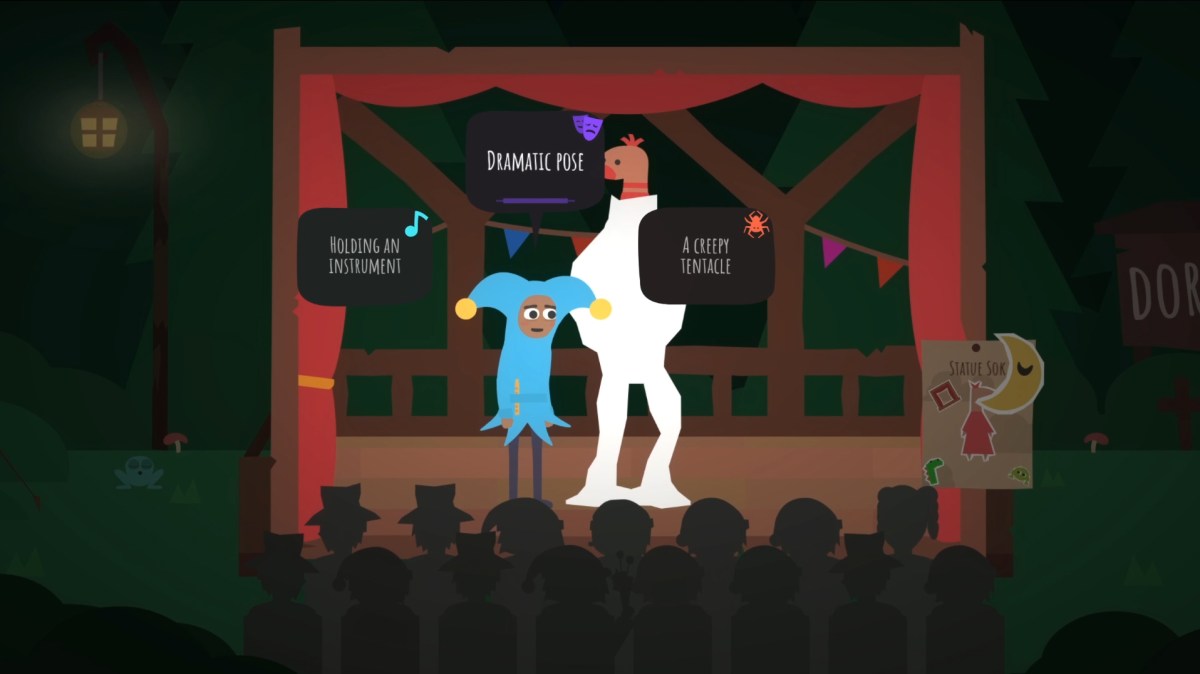 Being the theater kid that I am, I’ve spent a fair chunk of time watching and being on stages, including the occasional stint of improv (plus my time playing Dungeons & Dragons, of course). Let me tell you, even then, you roughly know what’s going to happen. Because as the actor, I’ve got the setup, and the words that I say, or listen to next, are mine to decide. It’s all happening in the moment, but you have control over the situation and the outcome, whereas the audience is oblivious to anything. They are just there for the surprise. And depending on how they feel that day, they might love it or hate it, but they sure as heck are about to witness something they couldn’t have imagined.

Creating that feeling of control juxtaposed with unexpectedness in the player is the type of thing only games can do. In Once Upon a Jester, I loved every silly minute of it.

As I prepared to start a show, I’d tap my partner and ask if he wanted to watch along with me. I just wanted him to share the experience with him, but the joy in waiting to find out how my choices would impact what he saw was so exciting. 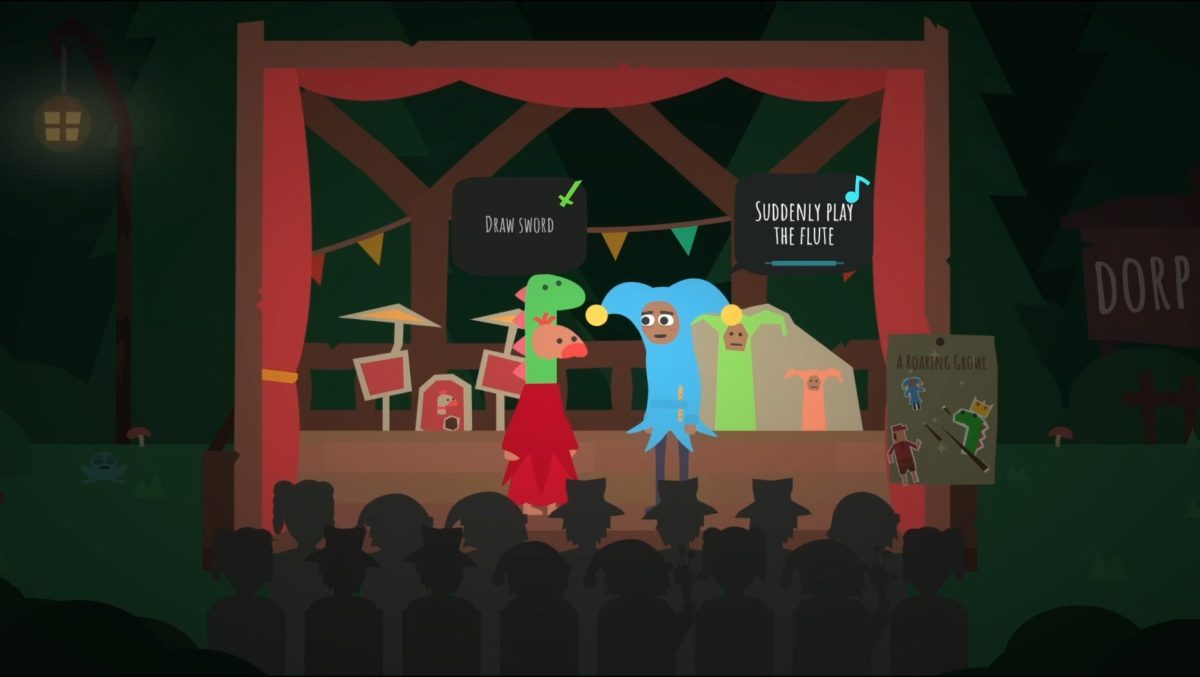 Hilarious spoilers for Amy’s particular playthrough of Once Upon a Jester follow from this point forward!

I will never forget what actually happened. Jester literally died on stage. I was making him sing for a really long time, and my partner kept telling me to stop because I’d hurt Jester. I laughed and said, “No, he’s showing off. He’s meant to be singing!” And then bam. He croaked it. A silly little ambulance came on stage and Jester was brought back to life, but the whole sequence is seared in my memory because it was absolutely hysterical. Complete chaos and not what I’d expected when I’d asked someone else to watch my show, but it was theater magic at its most authentic.

That’s why I just loved Once Upon a Jester. It was super silly and imperfect, but it captured something that my singing and dancing heart loves all too much. That thrill. That spontaneity. That charm.

Maybe one day we’ll get a sequel that is equally as silly but brimming with even more shows for me to sink my teeth into and explore their mysterious endings. But until then, I’ll be waiting in Dorp Town, making the most romantic statue I can because, damn it, I just want the king to love me. The End.