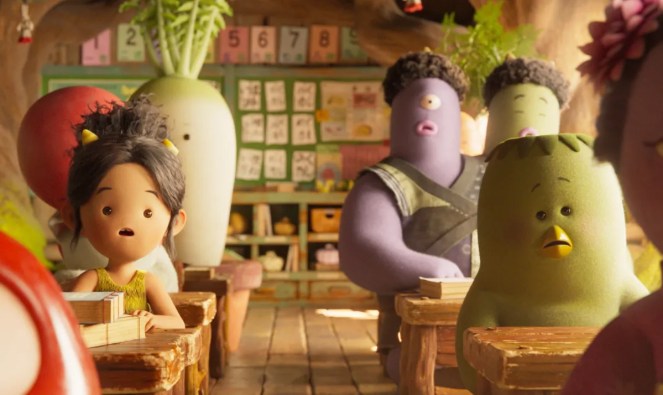 You’d be hard-pressed to argue that Netflix’s Oni: Thunder God’s Tale isn’t one of the best-looking animated projects of the year or maybe even in recent memory. The four-part series comes from animation stalwart Tonko House and is set to charm its way into our hearts with talking vegetables that aren’t anywhere near as creepy as those Veggie Tales weirdos. Oni: Thunder God’s Tale received its official trailer from Netflix today showcasing gorgeously animated elements of Japanese mythology.

The adorable (aside from the lead character’s lack of a nose) series tells the tale of Onari, the daughter of a Japanese deity, who lives among other mythological creatures and monsters. Her little community is about to be attacked by the mysterious Oni, who come to eat them every so often, and it is up to her and her friends to defend it. Unfortunately, her powers have not awakened yet and even the instruction of her dedicated teacher doesn’t seem to be helping.

While the storyline may not scream originality, as it’s pretty clear she’s going to find her true self and learn valuable life lessons, the series look is just fantastic. Tonko House talent has done a lot of work in the industry on others’ projects like Horton Hears a Who and Monsters University, but this is their first full-scale effort after their Oscar-nominated short The Dam Keeper. As you can see, they’re bringing a unique style to the table.