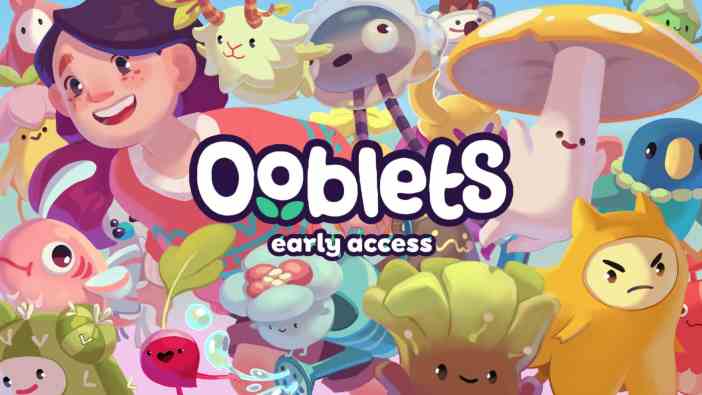 During the initial loading screen of Ooblets, tiny messages appear underneath the status bar with quick phrases like “finding inner beauty,” “brightening everyone’s day,” and “making you wait.” It turns out these alluring non-sequiturs perfectly encapsulated my time with Ooblets, an utterly pleasant mix of Pokémon, Animal Crossing, and Stardew Valley that just hit early access on Xbox One and PC via the Epic Games Store.

Since its reveal back in 2017, the development team at Glumberland has been nothing but open and honest about its inspirations. And while it might lack some of the depth and polish of those games cited as inspirations, that’s understandable given that Glumberland consists of just two people. But it’s in these limitations that Ooblets is able to deliver such a wonderfully singular experience.

The entire aesthetic of Ooblets lies somewhere among Katamari Damacy, a Lisa Frank notebook, and a looping “Lofi Beats to Relax To” video, and I’m absolutely here for it. Coming off a harrowing trip through The Last of Us Part II, and living through the hellscape of 2020 as a whole, this is exactly the kind of tone I was looking for. It’s cute without being saccharine, peculiar without being try-hard, and just simply a world I want to spend time in.

Also, and I admit that this is 100% just a weird thing inside my own brain, but the world of Ooblets reminds me a lot of The Village from the influential late-‘60s British sci-fi TV series The Prisoner, so I keep expecting to discover some ominous secret buried beneath the sleepy coastal village of Badgetown.

Ooblets’ gameplay loop draws proudly from the games that came before it. Upon arriving in town, you quickly inherit a ramshackle farm. It’s here that you’ll plant, maintain, and eventually harvest a variety of crops that can be used as ingredients in recipes, as parts for craft projects, given as gifts, sold for cash, or leveraged as cachet to battle against gangs of roaming creatures called — you guessed it — Ooblets. Win a battle, and you’ll get a seed that allows you to grow a new Ooblet to add to your own roaming band of critters.

These battles range from one-on-one faceoffs to six-on-six dance brawls. Your goal is to reach a set number of points before your opponent does, which you gain through rudimentary deck-builder mechanics. You have a set number of “beats” to use each turn, with stronger cards requiring more beats than weaker ones.

Some cards simply raise your points or drain your opponents’, while others produce status effects like add buffs, lower the number of beats required for a given turn, or stun an enemy. I use the word “enemy” pretty lightly because I never had any trouble winning any battles, and even after I was victorious, my character would congratulate my opponent on how well they danced. It would be nice to have some direct control over the exact composition of your deck aside from leveling up your Ooblets and gaining stronger cards, but like the other aspects of the game, this streamlined approach still just kind of works in the grand scheme of things. 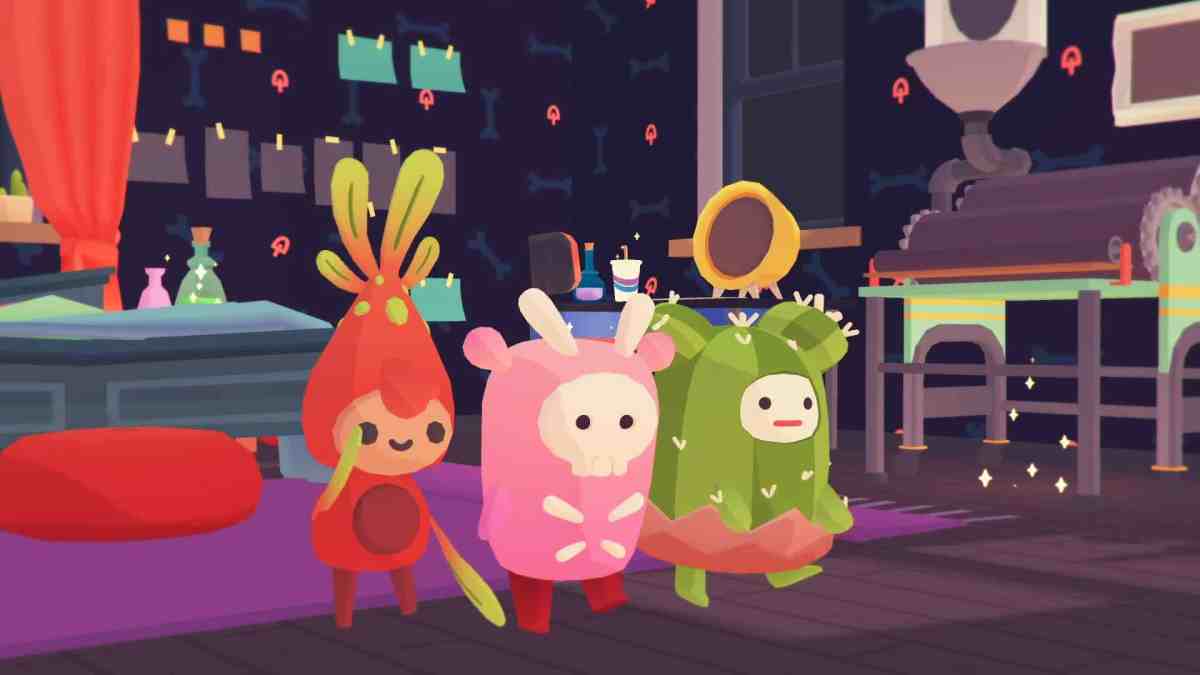 Everything you do in Ooblets feeds back into the sensation of simply helping people. At any given time, I found myself at various stages of half a dozen quests scattered across Badgetown and the neighboring wild of Mamoonia. Again, maybe “quests” is too strong of a word, because while the townsfolk have problems, they don’t quite involve saving the world. It’s more along the lines of fixing a hot air balloon, cleaning up the local dance hall, and figuring out how to get the internet back online.

Most of these requests are solved by delivering a set amount of various resources, which meant that every crop I harvested, hunk of wood I turned into twigs, and piece of junk I fished out of the ocean all fueled the slow march of progress. Like a lot of other games of this ilk, the feedback loop quickly transforms into a Skinner box of small victories on the path towards completing major goals, which then in turn open up more objectives for you to begin the entire process all over again.

Ooblets is in early access, so it’s not surprising that there are still a few rough edges. I had a couple of moments where I’d try to talk to a character, but no matter how many times I hit the interact button while I was next to them, nothing would happen. Likewise, the menus can be a bit cumbersome, and selecting which handful of items you want to be readily available on a quick-bar is clunky. 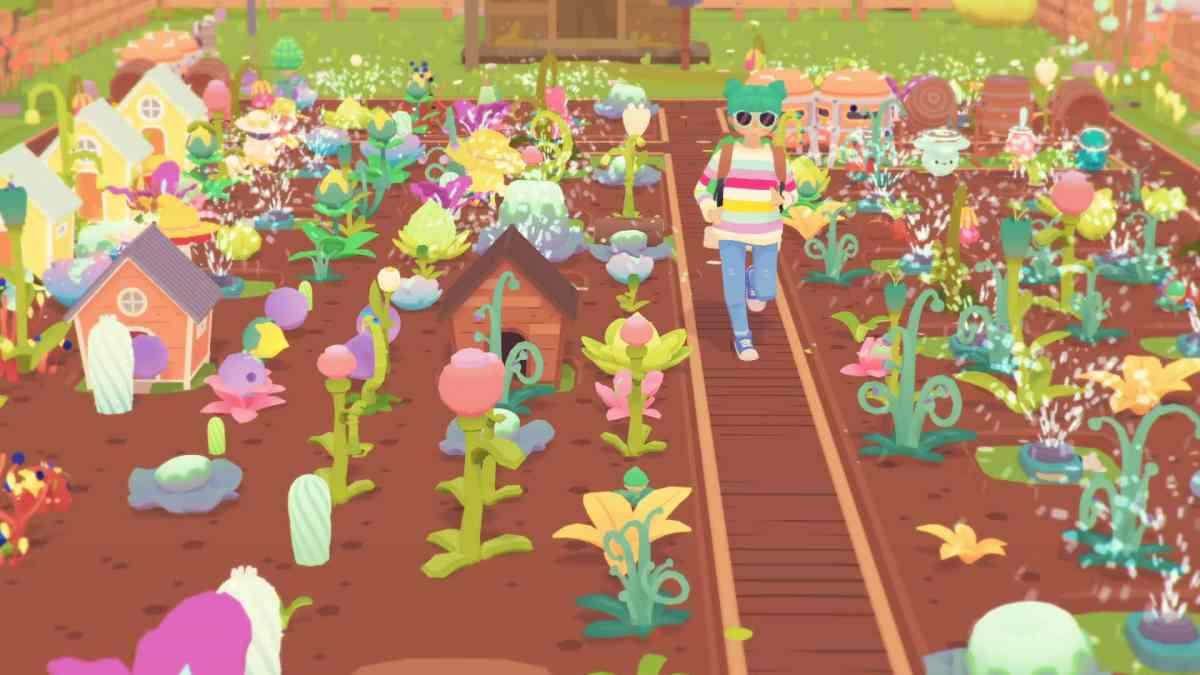 And I did have one particularly devastating moment where the game froze right as I was getting ready to win the local dance competition, which is most definitely high on my list of worst moments for a game to freeze. Again, these are the kinds of problems that are commonplace when a game’s in early access, and they can easily be remedied by the final release.

Even after putting close to 10 hours into Ooblets, there’s still a lot I’ve only scratched the surface of. I’ve hardly touched the Animal Crossing-esque design portion of the world, which allows you to buy and craft all sorts of furniture and upgrades to transform your farmhouse into a farmhome. Likewise, there are a bunch of hot air balloon destinations and paths out of town that are currently blocked off due to the early access-ness of it all, meaning that the world Glumberland has created will only continue to grow.

Simply put, Ooblets is a wonderfully relaxing game to simply exist in. The vibe is lovely, the critters are adorable, and the slow-yet-constant march towards completing your tasks is rewarding. The roots here are strong, and with the right amount of care and tending, Ooblets has the potential to grow out of early access into something special.