When a science-fiction franchise and its writers love each other very much, sometimes they make a baby. Being a common enough aspect of human life, the birthing of babies happens all the time in movies and television, sometimes to actually introduce a new character, sometimes to develop the character of those involved. Often babies are catalysts for a fish-out-of-water character development; anyone else remember Lieutenant Worf’s “Congratulations, you are fully dilated to 10 centimeters. You may now give birth?”

I want to examine the appearances of and phenomena surrounding birth and babies in science fiction. This is in no way a shameless reminder that the anniversary of my own birth is one week from today. 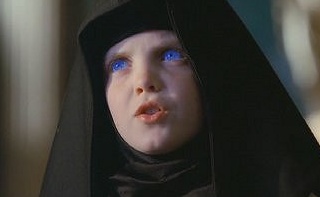 Pregnant women have a whole host of things not to do while pregnant: Don’t smoke, don’t drink, don’t do excessive amounts of intravenous drugs. Doctors should tack “don’t drink the Water of Life” to that list, because that will mess your baby up. The Fremen find themselves in need of a new Reverend Mother, and Lady Jessica’s the only Bene Gesserit around to undergo the spice agony. Sounds like fun, right? Turns out pregnant women should not ride the spice agony coaster, because all that sand worm bile will awaken the consciousness of the unborn baby, and make her susceptible to possession by ancestral personalities in utero.

Welcome to the world of Dune, y’all.

Alia Atriedes is Lady Jessica’s baby, born with all the ancestral memories of a full Reverend Mother. The Bene Gesserit call these children Abominations, and usually kill them. They didn’t get Alia, though, and she earns the nickname “St. Alia of the Knife” somewhere along the path to becoming a genuine Abomination. The world of Dune is particularly concerned with family, breeding, and mysticism, and Alia’s shouldn’t-have-happened-that-way birth holds long-lasting repercussions. 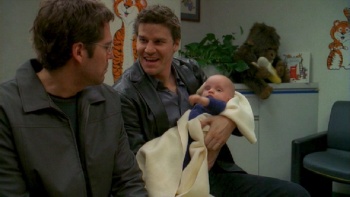 Say I’m in charge of a popular fantasy television show. I’ve gotten myself to the point where there’s a vampire, impregnated by another vampire, which is impossible. Exciting, right? I make the whole pregnancy tie in to a bunch of prophecies, and that ups the ante. I don’t want the mother around, though, so I’ll introduce some complications and have her give birth by staking herself through the heart, thereby disintegrating into dust around the baby. Oooh, that’s interesting. I like that bit.

Problem is, with all these prophecies I’ve established, I’m going to need this kid to be walking and talking pretty soon, but he’s a newborn baby. Hrm. Wait, I’ll just send him to a demon dimension! I’ve already established that time works differently there, so I can send him off as a baby, wait a couple weeks, and when he comes back he’ll be an exceptionally annoying teenager! Perfect.

Meet Connor, the human son of the vampires Angel and Darla. Connor has the distinct honor of being both my favorite and least favorite character on Angel: He was the Cutest Baby Ever, but once he grew up, I had to restrain myself from throwing a fist through my television set. Connor was an important catalyst for everything from Wesley’s estrangement to Jasmine’s ascension, but I still would have liked it better had he stayed an adorable little non-angsty baby. The circumstances surrounding his birth do represent a fascinating method of introducing an adult character, though, and took the audience by surprise as often as the characters. 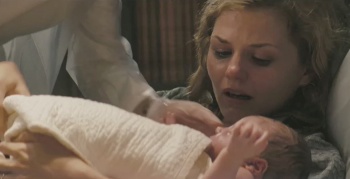 It’s hard to remember a time before James Tiberius Kirk, but when J. J. Abrams started the franchise over with 2009’s Star Trek, he seriously started over, opening his story with the birth of everyone’s favorite rule-breaking, bed-hopping captain.

Lieutenant Commander George Kirk finds himself in an unenviable situation. The ship on which he serves, the Kelvin, is under heavy attack. The captain’s just been killed, and the angry looking assailant is about to blow the starship out of the sky. Kirk orders the evacuation of the crew, and ensures his very pregnant wife Winona a place in one of the escaping shuttlecraft. Everything seems to be taken care of, but the assailant has to be stopped.

What’s a newly-anointed captain to do? The only thing he can do: Kirk sets the Kelvin on a collision course, sacrificing himself to save his escaping crew. This leaves Winona Kirk in labor, on a speeding shuttlecraft, without her husband. The two have a com link open, allowing Kirk to hear the birth of his son, and the parents to agree upon the name “Jim.” Then the Kelvin explodes, Kirk dies, and Winona finds herself the single parent of James Tiberius Kirk.

It’s a short scene, but lays the groundwork for so much of the movie to come. The pathos of the scene presents a contrast to the devil-may-care Captain the boy will become, the circumstances inform his later relationship to the Kobayashi Maru, and the exploration of established events prepares us for a deeper, and different, progression of the story we all know and love. 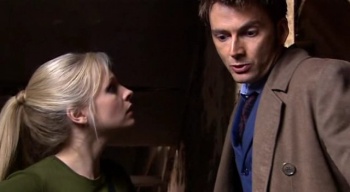 Jenny is a walking, talking, grown-up infant. She’s a war machine, a Baby Spice lookalike, and a genetic anomaly. She’s also the Doctor’s daughter, complete with two hearts. Jenny was born from a tissue sample forcibly taken from the Doctor’s hand, emerging fully grown from a Progenation Machine. She was born a soldier, and takes to it like an ass-kicking duck to water, but she’s intrigued by her father’s line of work. She fights as she was made to, but the episode’s climax, she’s decided to travel with her time lord father, exciting about running around and seeing the universe. (Seriously, there’s an outrageous amount of running involved.)

If you haven’t seen the episode “The Doctor’s Daughter,” but would like to, please stop reading here.

Just us in the know now? Good. Jenny’s death gives us a beautiful insight into the Doctor’s character, as he holds a gun to her murderer’s head. The moment seems to last forever, and Tennant plays it beautifully, ending the confrontation in as clear a call for peace as Doctor Who has ever had. Jenny’s existence provides us another filter through which to view the Doctor, further revealing the depth of his isolation and his endless capacity for compassion.

In the end, not being dead after all, Jenny herself sums the appeal of the Doctor’s life pretty perfectly: “Planets to save, civilizations to rescue, creatures to defeat, and an awful lot of running to do.” Pretty perceptive for an infant.

Luke and Leia, Star Wars: Revenge of the Sith 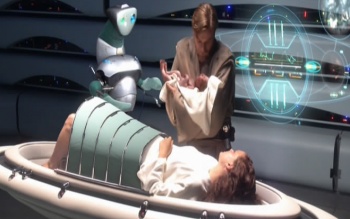 Starting in medias res and working your way back to the beginning gives an audience a delicious sense of dramatic irony, and George Lucas played it to the hilt. Whatever flaws Episodes I, II, and III may have had, giving big moments their due was not one of them. Padme’s pregnant with twins, and refuses to believe their father, Anakin, has fallen to the Dark Side. In seeing for herself, she’s nearly strangled, and indeed, Anakin believes he has strangled her to death. Shortly thereafter, Anakin meets his fate in the form of molten lava, and ends the day with fewer limbs than with which he began.

Well, Padme does die, but not before giving birth in a space-agey, shallow bathtub with a pastel modesty cage. The uproar and pain amongst which these children enter the world is indicative of the Star Wars universe as a whole, and informs to their respective destinies. Dramatic irony is again our friend here, and we know that the agonies suffered to bring about these babies – Anakin’s downfall, Padme’s death – are catalysts their later actions.

Luke and Leia’s birth not only marks the beginning of their epic journey, but the end of Episodes I, II, and III, and that’s the best birthday present any child of a Jedi and a Senator could ever want.