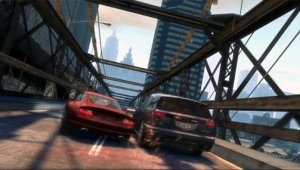 I like open world games – in principle. Granted, the worlds are never really open; most max at around small-town size. But compared to the games in which you’re stuck on a single stretch of road, where the colors change occasionally to signify you’ve moved to a new area, games like Grand Theft Auto feel like vast universes.

“Open-city game” might be a more appropriate moniker, but even in games like GTA, where you supposedly have an entire mid-size American town at your disposal, most of the buildings are still closed. Want to pop into the Chinese deli on the corner? Too bad; no missions in there.

And don’t get me started on the people. Most of the inhabitants of open world games are listless, vacuous automatons shuffling painfully from one side of the street to the other, as if they really have anywhere to go. Those doors don’t open, man! Where are you going? It’s like attending a party where you already know everyone: There’s fun to be had, but don’t expect any surprises.

The achievements in A.I. aren’t lost on me. I acknowledge the complexity of making hundreds or thousands of realistic computer-controlled people go about their simulated daily lives, flitting from one simulated edifice to the next, and the surface similarities to real pedestrians are striking. To get the full effect of the simulation you have to lose yourself in thought for a minute, dancing down the solipsistic avenue where everyone and everything is a figment of your imagination and you’re the only one who really matters. Playing GTA is a lot like being a teenager.

Do you know why most TV shows and movies are about teenagers? Because being young is awesome. Aside from the fact young people are just plain pretty to look at, they ooze energy from their pores, giving off in waves a feeling of limitless potential. It’s like blood to a vampire. We, in our aging vessels, withered with time and the dashing of dreams, feed on this energy like sycophantic whores, drinking it in, bathing in it and hoping, like Countess Bathory bathing in the blood of virgins, it will impart to us some of its powers.

Why do grown men and women (mostly women) watch The Hills? Because we’re vampires. We look longingly in the rear view mirror at the time when we didn’t feel out of place in a bar full of underage drinkers. When we walked into the bar, saw all the girls – all the girls – and realized, looking at all that shiny hair, hearing all those giggles and smelling all that perfume, that these girls, each and every one of them, had private parts. All of them. The possibilities seemed limitless. Then came the day when 80 percent of them didn’t like our hair and we realized we’d been going to that bar for years, only the girls hadn’t aged – we had. It feels like someone pulled the cord on the train to awesome, and we were left wondering why, oh why, we didn’t settle down with That One Who Treated Us Nice as we pursued meaningless relationship after meaningless relationship with girls who undoubtedly looked better at 2am. Or perhaps that was just me. Moving on …

The great irony of life is most of us can now, thanks to the miracles of modern science, totter on into our 80s and 90s, still capable of fornicating but unable to chew solid food, yet that brief explosion of joy, lust and pain between ages 15 or 16 to around 25 is seemingly the apex of life. Everything afterward is a slow downward spiral into variously sufferable mediocrities. Wisdom and experience, as blessed as they may be, are no great consolation.

I know now, for example, how to feel my tires slipping away from the road in the rain and how to correct the problem before I become a headline in the obituary section. I know driving is easier at safe speeds, and I know obeying the traffic laws will, ultimately, grant me more freedom, not less. But these are hard-won lessons; counterintuitive and dreary. Driving safely just isn’t as much fun, and screw the money I’ll save, the detention I’ll avoid. Dammit, if Vishnu intended for us to drive at posted speeds, why does the speedometer go all the way to 120? Why do engines sound like purring sex kittens at high speed? Speed, from Day One behind the wheel, has felt like the cure for all the ills of American life. It’s as addicting as heroin, and twice as deadly. Going sober isn’t as easy as simply slowing down. If you’re addicted to speed, you’ll always be an addict. Always.

Sitting behind the wheel for the first time felt like a blow to the psyche, cracking the world open into an impossibly large scale. I suddenly realized there was nothing stopping me from driving to California (for example) but a few stretches of highway and a whole lot of time. When you’re 16, 18, 20 … time is nothing. All it takes to get from A to B is the application of a little gas. Apply more and you get there faster. How fast? Well, what have you got under the hood?

One of my first cars was a little Honda Civic that had been carefully modified by a previous owner to disregard posted traffic regulations. It wasn’t even technically street legal, but damn, was that mother fast. One night in San Antonio, bored perhaps, but most likely annoyed at some girl, I decided to see what she had. It was well after midnight, traffic on the 410 was light and I had nothing better to do. So I sidled into the middle lane and opened her up. Ten white knuckle minutes later, I still had no idea how fast the car could go. I lost my nerve at 115, but the car, she was still ready to go.

A year or so later, peeling asphalt on the long, flat highway between Fort Worth and Canada, I got my first taste of how hard life can lean on the rule breakers. This would not be the last time I’d meet a man wearing a cowboy hat and a gun, but it would be the most expensive: a $300 ticket on the spot (pre-2000 dollars, mind you), and he should have taken my license. I wouldn’t blame him, now, if he had. That same year, having missed a turn during a late night party hopping spree, I swung wide on a two-lane, gravel road, felt my tires bite deep into the soft shoulder, shifted down, pulled the hand brake and gunned it, spinning the little four-banger in a tight circle, trying to head back in the other direction without losing too much momentum. I felt like a god, the car, my sun chariot. That feeling lasted about two seconds, until the Oldsmobile station wagon I hadn’t seen in the opposite lane clipped my back bumper, sending my car into a spin and hurtling into a ditch. No one was hurt, miraculously, but the Civic was done for, and my days as a lawbreaking road warrior were drawing to a close.

As I learned to drive (mostly through trial and error) like a civilized human being, I was also getting to know the Texas legal system quite well. It works like this: break a law, you get boned. The end. I understand several other states operate in a similar manner. They have to make up for the lack of an income tax somehow. After that first extravagant speeding ticket, successive offenses piled up until I decided enough was enough; if I was ever going to have a future as a debt-free human being, I had to tame the tiger in my tank. The result: adulthood, and driving safely under the speed limit, which, I can assure you is exactly as much fun as it sounds.

In an open-world game like GTA, however, there are no penalties for breaking the law. None that matter anyway. In fact, breaking as many laws as possible simultaneously is encouraged and rewarded. It is, after the beat down of becoming a responsible adult, like a tonic to the soul. In the game, the girls, once again, all have private parts and the speedometer goes to 120 for a reason. Granted, they still haven’t figured out how to make all the little nuances of living a lawless life come alive, but they’re working on it.

The advancements in virtual world games in the past few years alone have been jaw-dropping, and all point toward the ultimate, eventual goal of creating a game where what you can reasonably accomplish in real life is faithfully represented in digital form. All of life’s possibilities uncapped by technological; the limitations of reality rendered inconsequential. Traffic got you down? Screw the other guys; they’re just artificial intelligence anyway. Blast that fuel truck and the rest go down like dominoes.

Granted, there are good sides to living a life of quiet obedience. The beating a body takes from a crash can’t be overstated. You may walk away, but you won’t walk without a limp. Add in a little bit of good-natured gunplay and the distance between the fantasy and the real begins to make a lot more sense. And yet, as hard as I try to get out, GTA keeps pulling me back in. I’m looking forward to GTA IV in a way I didn’t expect when it was announced. This may have a little to do with the fact that there just aren’t any other exciting games out right now, but it has a lot to do with wanting to be young again – and free.

Russ Pitts is wondering how much sick time he has. His blog can be found at www.falsegravity.com.