A soldier charges forward despite the bullet in his abdomen. A criminal robs a bank and loses the cops in a high-speed chase. In games we accept this as normal procedure-just standard game mechanics, nothing to see here-but then we start talking about whether it’s realistic or not and things get more complicated.

Here’s the normal answer to whether these mechanics are realistic: Bullshit. Couldn’t happen. No one is that powerful. We understand that there’s a dissonance between the behavior of game characters and real people, and dismiss it as a consequence of the medium the same way we accept an actor onstage pantomiming driving a car or riding a horse. Of course Niko Bellic can shoot up a strip mall, evade the police, and become anonymous again in minutes, we think, it’s a game. A normal person couldn’t run around being a criminal publicly without being caught, not in the real world, the same way you can’t get hit by grenade shrapnel and hide behind a wall until your wounds heal.

But when we say that, we forget one thing: In games, we don’t play as normal people, we play as extraordinary people.

Consider regenerating health, for instance. We take it as a given that soldiers couldn’t really carry on fighting with a bullet in their abdomen, and if someone says otherwise, we assume they’re either naive or an apologist fanboy. What we don’t think about is people like Daniel Inouye.

On April 21st, 1945 Lieutenant Daniel Inouye was lying face-down in the Tuscan dirt, crossfire from three German machine guns pinning his platoon to the ground. The enemy was dug into a ridge 40 yards away, firing from bunkers and rock formations. Inouye had already been hit once by a sniper, with the bullet entering his lower belly and exiting a quarter-inch from his spine.

With his men pinned down and vulnerable from the punishing fire, Inouye grabbed a bag of grenades and crawled within five yards of the first bunker. He lobbed in two frags and silenced the first machine gun. Then, alone and exposed, he pulled the pin on a third grenade and turned toward the next machine gun nest-but found himself staring into the barrel of a German rifle grenade. The shot went wide and hit Inouye in the elbow, the shrapnel ripping through flesh and tendons, almost completely severing his right arm.

While the German reloaded, Inouye looked for the dropped frag, shouting at his men to stay back. He found the live explosive still clutched in the nerveless fingers of his dangling right arm. In a fog of shock, Inouye pried the grenade from his own dead fingers and tossed it at the German offhand, taking out the second nest. Then, in a blind rage, he picked up his Thompson and charged the third machine gun, firing left-handed into the bunker with blood spurting from his right arm. A bullet kicked his leg out from under him and he rolled down the hill unconscious.

When Inouye awoke, he refused medical evacuation and propped himself against a tree. He stayed there for a full hour, directing his men until they secured the ridge.

Now, that’s a pretty unbelievable story-no doubt if you saw it play out in a game you’d chalk it up to rah-rah go-America FPS absurdity-but not only is it true, Daniel Inouye is alive and well and serving his ninth term in the U.S. Senate. The U.S. Army gave Inouye the Distinguished Service Cross for his actions at San Terenzo, and President Clinton upgraded it to the Medal of Honor in 2000, acknowledging that the U.S. Army had denied full recognition of Inouye’s actions because he was part of the Japanese-American 100th Battalion/442nd Regimental Combat Team. And he wasn’t alone; 19 other men from the 100th/442nd also had their medals upgraded, all for actions just as crazy as Inouye’s. This, along with eight Presidential Unit Citations, 32 Distinguished Service Crosses, 560 Silver Stars, 4,000 Bronze Stars, and 9,486 Purple Hearts, make the 100th Battalion/442nd RCT the most decorated unit in the history of the U.S. Army. Each of those medals represents an act we wouldn’t consider realistic, or even possible, under normal circumstances.

Though in some ways, it’s cheating to talk about military history in the context of extraordinary actions. It’s generally acknowledged that the men and women serving in militaries around the world regularly go above and beyond the limits of what people do in “everyday” life, or even the limits of what soldiers are expected to do. (Call of Duty, after all, comes from the idiom “above and beyond the call of duty,” meaning a soldier who has performed above what is normally expected.) The military is, in fact, a social construction that facilitates and encourages people to do amazing things like dive out of airplanes and rush machine gun nests. What about a game set here on the homefront?

Grand Theft Auto‘s relationship to reality is a touchy subject in many ways (it’s still the go-to title for anti-game mavens when they want to beat a dead horse) but generally the dissonance is just treated as a joke. Liberty City PD isn’t going to pick Niko up for leaving a finger print on a car door, for example, and they’ll conveniently forget his face the moment he checks into the hospital after gunning down helicopters in an urban center. Modern police methods don’t seem to exist in the GTA world, since anyone who acts like their protagonists would get caught inside a week.

Unless you’re the Whisky Robber, of course, and you’re pulling all your capers in post-communist Hungary. Back in the ’90s, modern police methods didn’t exist in Eastern Europe either-detectives sometimes worked in the dark, since the Interior Ministry couldn’t pay its electricity bills-and low police salaries ensured that Budapest cops fell into three categories: corrupt, incompetent, and underequipped. Most banks didn’t have closed-circuit camera systems and a lot of businesses dealt in cash, laying the groundwork for the most spectacular and bizarre spree of armed robberies in European history. 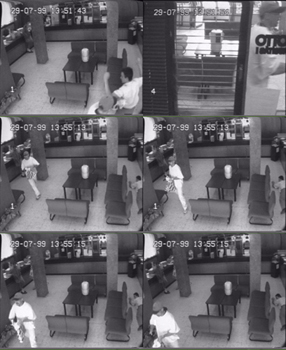 What made Attila Ambrus extraordinary wasn’t that he robbed 29 post offices, travel agencies, and banks between 1993 and 1999. It wasn’t that he took more than $800,000 over the course of those heists. It wasn’t that he rubbed shoulders with mobsters, became a folk hero, or because he earned his earned name by getting tanked at nearby pubs before performing his heists. What made Attila “The Whisky Robber” Ambrus extraordinary was that he did all this while keeping his day job as a professional hockey goalie for UTE, a team sponsored by the same Interior Ministry that chased him for six years.

Attila probably came closer than anyone to actually personifying a GTA character. From the moment he entered Hungary seeking political asylum from his native Romania (he crossed the border by jumping on a moving freight train and hanging on underneath the coupling six inches above the track) his life became a cavalcade of mishaps, strange characters, odd jobs and criminality. Eventually, Attila landed a place as a second-to-third string goalkeeper for UTE, less because he was a good player-in fact he may have been the worst professional goalie in the history of the sport-but because he was a hard worker, accepted a salary of $0 a week, and agreed to serve as the stadium janitor in exchange for the privilege of living in a supply closet. During these early days he perfected the moneymaking side-quest by selling pens, serving as superintendent for an apartment building, and digging graves. His first big break, however, came when he started to make a tidy profit smuggling animal pelts across the Romanian-Hungarian border. When that enterprise collapsed, leaving him in a mountain of debt, he robbed his local post office dressed in a wig and a pair of sunglasses, wielding a cigarette lighter that looked like a gun.

Then, when he ran out of money, he did it again. And again. For six years.

Attila’s continued success was due to careful planning-he knew all the escape routes from each target, as well as how long it would take the cops to respond in rush hour traffic-as well as the limitations of the Hungarian police force. Attila would show up at a bank or post office at closing time, present the female tellers with a bouquet of flowers, wave his Tokarev 9mm around, say “please” when he asked employees to open the safe, kiss the hands of any pretty women, lock the place up and be gone inside three minutes. Newspapers and TV shows loved him, calling him an honest thief compared to the corrupt politicians that were disgraced on a seemly daily basis. Attila played up the media attention, leaving bottles of wine addressed to the chief of police and once pulling a job dressed as Lajos Varjú, the head of Budapest’s robbery squad.

Meanwhile Attila and his accomplices (usually his cousin or another UTE player) were living it up with mob figures at western-style casinos and The Cats Club, a high-end brothel that catered to members of parliament. His associates were sensational, Rockstar Games-ready personalities: Uncle Béla, the Romanian “Pelt King,” a goateed, Armani-suited brothel-keeper who eventually died in a car bombing; a string of girlfriends clad in leopard-print fabric; Varjú, the harried-but-honest cop chasing him, who trained his squad with dubbed episodes of Columbo; and Bubu, his hulking Transylvanian teammate whose only function on the UTE roster was to find the opposing team’s best player and beat the bejesus out of him. Attila’s life was a whirl of roulette wheels, parties, booze, bank heists, narrow escapes, lost hockey games and fan riots. He drank constantly and barely slept.

It couldn’t last. Attila was caught in 1999 after his 26th robbery, trying to drive across the border into Romania with his Bernese mountain dog Don in the back seat. He stayed in custody long enough to give up the info on all his robberies and do some press interviews, then escaped from prison and hit three more banks. During his three months on the lam, his lawyer announced Hollywood script deals and started negotiating a Whisky Robber energy drink endorsement. After being caught again and serving a 12 year sentence, Attila was finally released in January of this year.

Now, imagine you saw that story in a game. Would you believe it?

The problem with reality is that our perception of it is heavily based on our own life experience. We work, we go to school, we raise kids, and we unconsciously develop an understanding of what could and could not happen in the small sphere of the world we inhabit. Sure, we hear about bank heists and war-we even see them on TV-but that’s a fundamentally different experience than actually living them, and their distance makes these events feel less possible. Our disconnect with game characters comes when we compare them to ourselves, the often ordinary people who puppeteer them, rather than the extraordinary people they’re meant to resemble. When we play games we’re not playing people like us, we’re playing as the Dan Inouyes and Attila Ambruses of the world, extraordinary people living extraordinary lives. Does that make Call of Duty and Grand Theft Auto realistic? Of course not-it’s still absurd that players can wade through bullets and commit crimes with such limited consequences-but it’s worth remembering that reality is often far more sensational than any videogame.