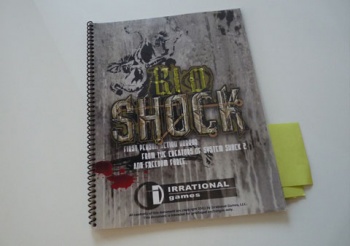 It’s BioShock Jim, but not as we know it.

You’ve all played BioShock, right? You know the game I mean, where you play as Carlos Cuello, a deprogrammer sent to rescue a wealthy heiress from a cult holed up on a tropical island? What’s that you say, that’s not BioShock? Well, no, it isn’t, but it could have been.

Irrational Games has released its original pitch document for the game on its official blog, from when the game was first envisioned in 2002. While many of the key elements where in place even at that early stage, it was a very different game than what was eventually released.

Aside from the completely different story, there’s no mention of Rapture, Big Daddies or Little Sisters. Genetic modification is in there, but it follows a very specific theme – that of taking features from sea creatures like electric eels or jellyfish – and there’s a heavy focus on customization of equipment and environment.

It’s an interesting read, and there’s more of it to come. What’s most interesting though, is that the game actually sounds like a lot of fun. I must admit, I kind of hope that Irrational make it one day.