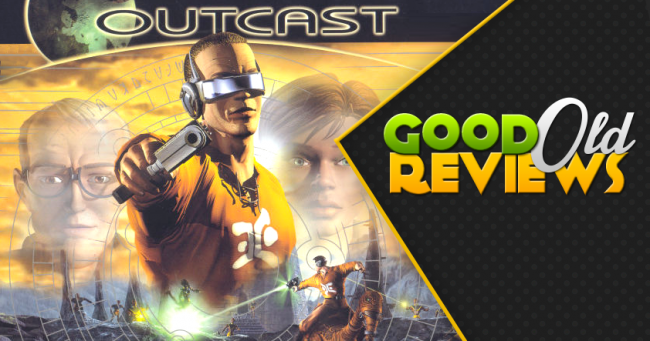 Calling a video game “revolutionary for its time” is a double-edged compliment: You’re saying it has great historical importance, but also implying it hasn’t aged well. Few games highlight this truth more than Outcast. It gave us huge open worlds two years before Grand Theft Auto 3. You could fast-travel on riding animals well before Halo offered vehicles. There’s even an emphasis on resource collecting and crafting reminiscent of modern survival games.

So why don’t we talk about Outcast more today? Well, just because you’re an innovative open world title doesn’t mean you’re especially polished. Its shooting mechanics were clumsy, level designs were overly simplistic, story and dialogue were laughable, and many puzzles were better suited to an adventure setting. While it was critically praised for many technological achievements, its awkward gameplay kept it from becoming a commercial success.

Which is a shame, but Outcast has a real creative charm that still feels fresh today. The game world, while limited, doesn’t feel like a sandbox of toys conveniently arranged for the player’s benefit. It’s a fully fleshed out setting where each NPC has a specific job and function, making you feel like a visitor in their daily lives. The entire planet can be explored right away, letting you complete quests, seek friendly villagers, or dodge enemy patrols at your own pace. And while it’s not an especially deep setting, it has just enough complexity to allow for some wonderful emergent gameplay.

Outcast is set in the futuristic 2007, where science just learned to break the boundaries of parallel universes. Unfortunately, everything goes wrong when a probe malfunctions across the dimensional barrier, triggering a vortex that will destroy Earth within a month. You play as former Navy SEAL Cutter Slade, because apparently current Navy SEALs weren’t available. Your mission is to escort a science team to a parallel world, locate the probe, and repair it so the vortex can be stopped. (Somehow.)

Once Slade crosses to the other world however, a different story emerges. He wakes up on the parallel world Adelpha, where an alien race called the Talan have given him shelter. It turns out Slade’s arrival was foretold as the coming of the Ulukai, a messiah figure who will liberate Adelpha from the cruel Fae Ran. Meanwhile, the scientists he’s supposed to protect are nowhere to be found, and his weapons and equipment have been claimed by the locals as religious artifacts. With seemingly no other choice before him, Slade agrees to a second Save-The-World quest: If the Talan help locate the scientists and probe for him, he’ll overthrow Fae Ran.

If you think this seems like an excessive amount of information for an introduction, you’d be correct. In fact, everything I’ve described is stuffed into multiple cutscenes before the game even begins. I tried playing Outcast with an Xbox 360 controller, and it turned off from inactivity before I could even start playing. It certainly doesn’t help that Outcast throws Adelpha culture shock at you, making you sit through basic elements of Talan language and society before you’ve pressed a button. And once you actually have control of Slade, you’ll still need to complete a series of tests to prove your abilities. Few tutorials are more patronizing when they reward your character – a NAVY Seal, I’ll remind you – for jumping across a small gap. In other words, Outcast‘s opening scenes are intolerably slow.

Your primary task is to gather the Mon, mysterious Talan artifacts which can end Fae Ran’s rule. The Mon are scattered across Adelpha’s six island continents, each of which is connected by various Stargate-like portals. Unfortunately, each Mon is usually guarded by Fae Ran’s troops, which means you’ll have to ally with local Talan villagers to weaken them. On one continent, you might halt the soldier’s food production, while on another you could disrupt their tax collection. Along the way you can also help the Talan with side quests, increasing your reputation among them and making them more enthusiastic to help you. 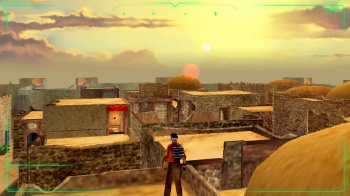 What’s refreshing about Outcast is that instead of following a linear storyline, you’re free to collect Mon in any order you’d like. The entire planet of Adelpha can be explored once the tutorial ends, with distant lands just a portal jump away. You’re can explore, fight enemy soldiers, or hunt for secluded items at your own pace, and Outcast will never tell you which method is the correct one. You’ll still learn strategies through trial and error – running into enemy outposts with just a pistol is always a bad idea – but those mistakes are always yours to make.

The open world itself can be something of a mixed bag, mostly because it was something few games attempted on this scale. Adelpha is huge and varied, with each new environment looking impressive as you exit a portal. But many areas also lack depth, filled with large empty stretches that contain little of interest. You’ll want to take advantage of fast-travel methods as quickly as possible, whether unlocking rideable alien creatures, or dropping teleport beacons at key locations.

One of my favorite elements from Outcast was how it handled NPCs. Each in-game character has their own function and purpose, outside of simply helping Slade with a particular mission. Quest-giving Talan can be found working in fields, while boss characters might have their our routines and patrols to follow. Sometimes you’ll revisit where you met a particular NPC, only to find they’ve wandered off to handle their daily tasks. And if you do lose track of a character, you can usually ask a nearby Talan for directions to their current location. These are minor details, but they really help Adelpha feel like a immersive place instead of a digital world of enemies to shoot. 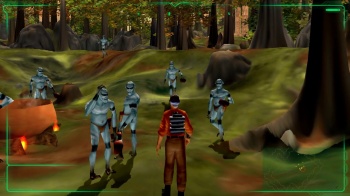 Another great touch is how Outcast takes common game mechanics and integrates them into the lore. The digital HUD emanating from your helmet is the most obvious example, even though it’s fairly common in sci-fi games these days. Instead of a built-in aiming cursor on the screen, you’ll rely on laser sights and aiming assists built into individual weapons. Slade’s massive inventory storage is accounted for due to advanced technology in your backpack, meaning you can carry more objects than the Doom Marine without being burdened. Even saving the game is handled by an in-universe item – the “Gaamsaav”, which preserves your essence to be restored at a later time. These are minor points, but they uniting the game world and mechanics really help Outcast feel immersive in a way few open world games can.

That’s not to say all of Outcast‘s mechanics run smoothly: Its combat systems are especially clumsy in both first and third person views. The problem is everything from heavy weapons to your lowly pistol fires slow-moving projectiles, and most enemies know enough to dodge. This reduces every combat to a dance where you’re avoiding incoming projectiles while trying to correctly time your own shots. Now consider that enemy numbers can rise to almost a dozen soldiers at once, and you’ll probably want to avoid combat altogether until your Talan allies help you weaken them.

Yet for all the problems I’ve mentioned, there’s something really special about Outcast. It truly feels like the first game of its kind: Awkwardly executed, but filled with a creative energy that’s deeply appealing. It’s no wonder developers took what Outcast accomplished and improved upon it, creating the open world systems we now take for granted. That’s a creative drive more open world games could use, even if they stumble in the attempt like Outcast did.