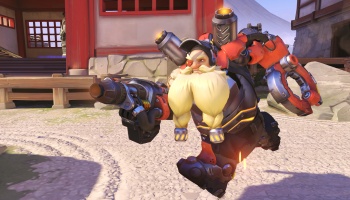 The nerf highlights the differences between the PC and console versions of Overwatch.

It’s very hard to balance a shooter to be fair for both PC and console. Especially one like Overwatch, where characters that are strong on one platform are weak on the other. Case in point: Torbjorn. While annoying on PC, he has plenty of counters and isn’t really a problem. On console, however, where auto-aim characters have a distinct advantage, he is a little on the strong side. So, he will be the first hero to be addressed in the game’s first console balance patch.

“In an upcoming patch, we will reduce the damage done by Torbjorn’s turret by 30% on Xbox One and PS4. PC will remain unchanged,” said Blizzard’s Jeff Kaplan in a reddit thread about the character.

Unfortunately, Microsoft and Sony’s certification process means that unlike the PC version of the game, which can roll patches out instantly, the Trobjorn nerf won’t hit until “mid to late July”. So Trobjorn mains: now is the time to enjoy your time in the sun.

It’s really awesome that Blizzard is committing to balancing the game separately for both platforms. A recent PC patch for the game nerfed McCree and Widowmaker.