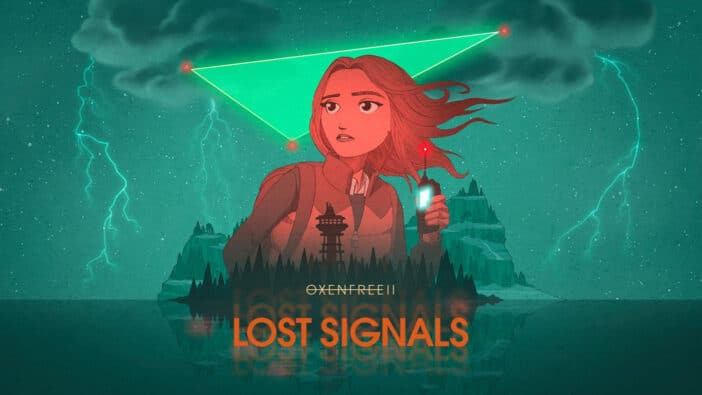 2016’s Oxenfree is one of the defining indie games of the last generation. Night School Studio’s debut took the beating heart of the LucasArts-era adventure game, packaged it in some of the most remarkably stylish visuals and sound design imaginable, and made it feel like something wholly unique. And after seeing a brief hands-off preview demo of Oxenfree II: Lost Signals, it’s clear that the follow-up understands the exact directions that an expansion of this universe should go in.

For my money, the original Oxenfree contains some of the most natural and conversational dialogue in any game ever. A combination of the realistic-yet-stylized writing, wonderful performances, and implementation of the Aaron Sorkin-esque “walk-and-talk” mechanics all work together to create characters that just sound right. It’s up there with Disco Elysium and Firewatch as the games where I could spend hours just listening to the characters shoot the shit.

So, it’s no surprise that the small preview I got to see from Oxenfree II exudes that same level of spoken artistry as the original. This time around, instead of following Alex and her high school pals on their overnight bonfire party gone awry, the focus is on a new set of characters who are decidedly older than their teenage counterparts. While the new characters, setting, and five-year jump in time makes the sequel stand apart from the original, it’s clear that Lost Signals is zooming the lens out on the world and events that came before it.

According to the synopsis provided by Night School Studio, “Riley Poverly is an environmental researcher who returns to her hometown Camena to investigate mysterious radio frequency signals causing disturbances in electronic equipment throughout the small town. She soon discovers a long history of ghostly happenings on the nearby Edwards Island and becomes entangled in a frightening, supernatural mystery.” Yup, sold. 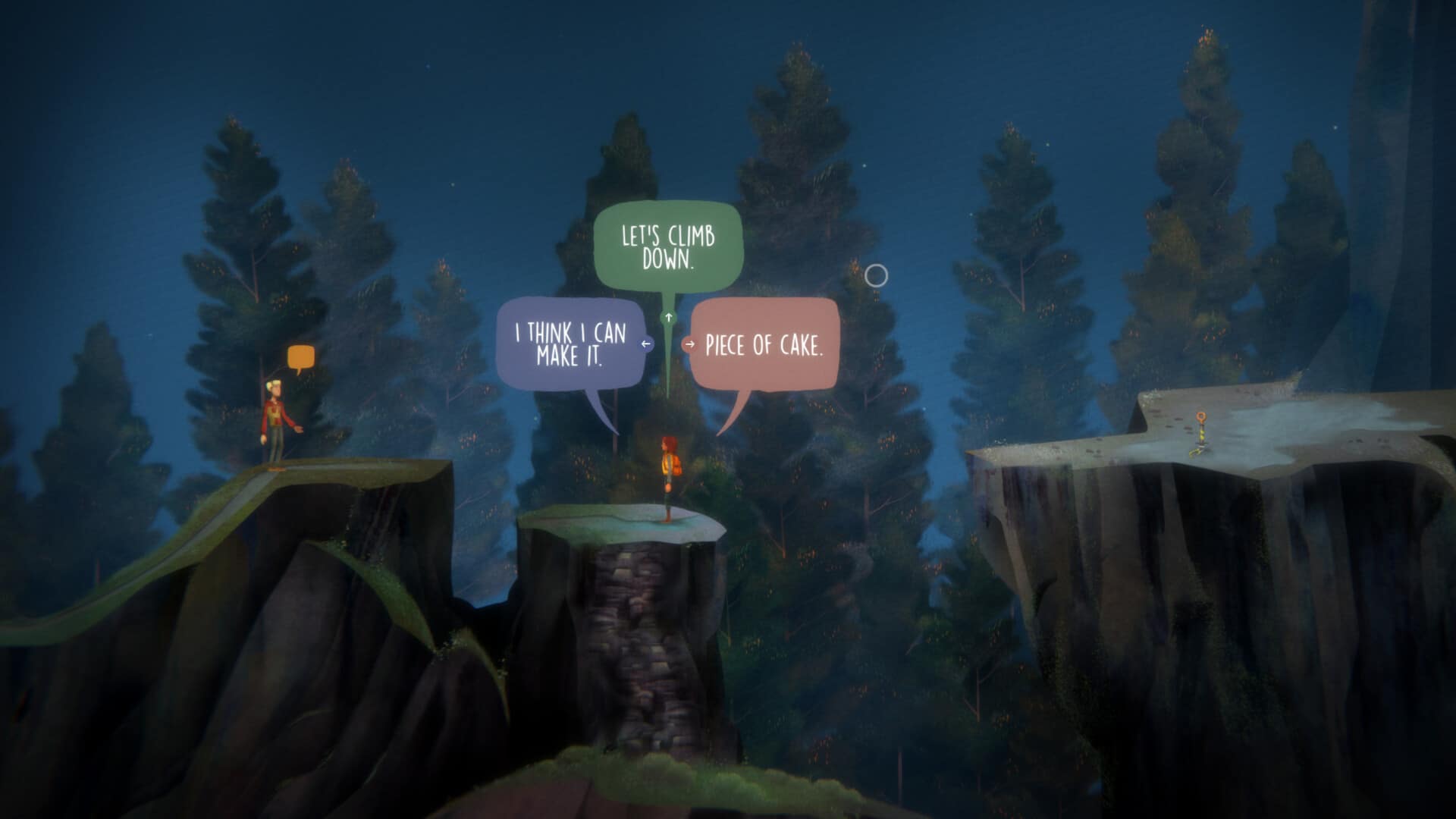 During our hands-off demo, we were introduced to Riley and her old classmate Jacob. It feels like the pair had drifted apart, only recently being reunited. The game’s main antagonists were also brought up, but not directly shown. They’re a group known as Parentage, a masked cult who is attempting to “undo” everything that Alex fixed in the original and instead is trying to use those time / space portals to pull something out.

Apart from the aforementioned free-flowing dialogue, Oxenfree II expands upon player choice in a handful of other ways. Chatter on your new walkie-talkie can be ignored or engaged in, leading to side stories with characters that can be experienced or completely missed. The team also focused on creating multiple routes to take towards any given destination, with lots of ins and outs that lead to different micro-stories. The same goes for distinct traversal decisions that play out similar to dialogue choices. At one point in the demo the pair reached a small chasm. Being the more agile of the two, Riley could choose to try to make the jump herself and separate from Jacob, or take the long way around and stick together.

In our playthrough, the pair remained together, climbing down into the chasm and eventually making their way to an abandoned mine, where they stumbled across a live canary in a cage. It’s a strange sight, considering how the rest of the cavern seemed undisturbed for decades. A bit further ahead, the path forward was blocked by a crashed elevator that looked like it had been there for a century. The strangeness culminated in them encountering a bright orange rip in reality. From the dialogue, “It’s another one of those things. A… time tear, if we’re naming this stuff?” it’s clear that this wasn’t the first time they’d found one of these anomalies. 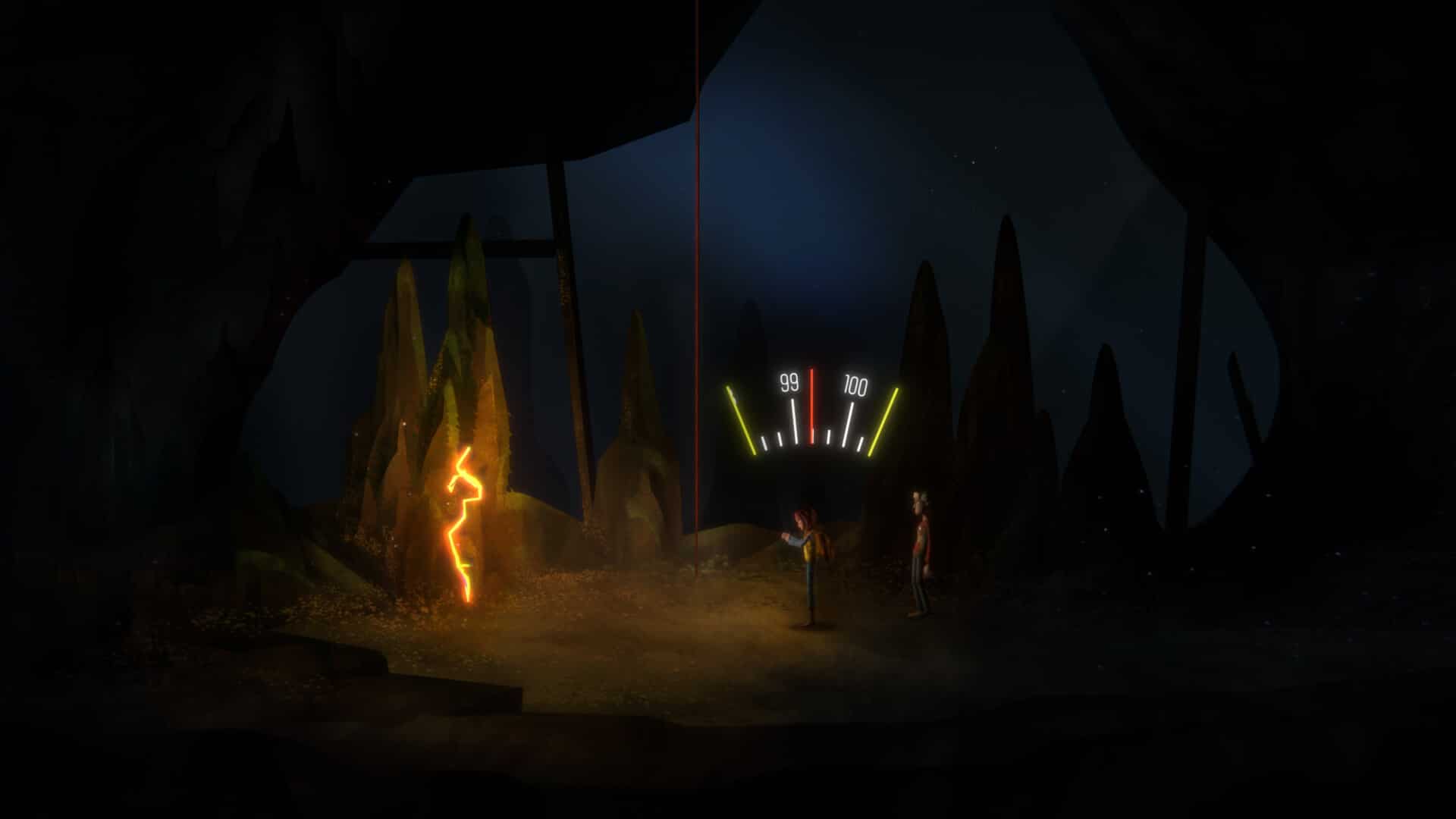 Seeing no other way around, the pair slipped through the rift, finding themselves back in the same mine, circa 1899. The entire screen was now framed in jagged edges of neon light, lending an otherworldly quality to the whole thing. The mine was also now completely functional, but surprisingly still empty. Retracing their steps in this new era, they found that same birdcage, but this time, the bird was dead. And if you know anything about canaries and coal mines, that’s not a great thing to find.

The pair eventually made their way back to the now-functional elevator and, after a bit of puzzle-solving, both made it up and across to another tear that took them back to the present day. However, during this whole ordeal, their actions caused a bit of a collapse in the mine, leading to the elevator crashing down behind them. This ending to the demo left me with the tantalizing timeline conundrum of Riley and Jacob’s actions in the past being the cause of the mine’s state in the present. I’m really looking forward to seeing how Night School plays with these ideas of temporal cause and effect even more, and some puzzles will play out across multiple timelines. 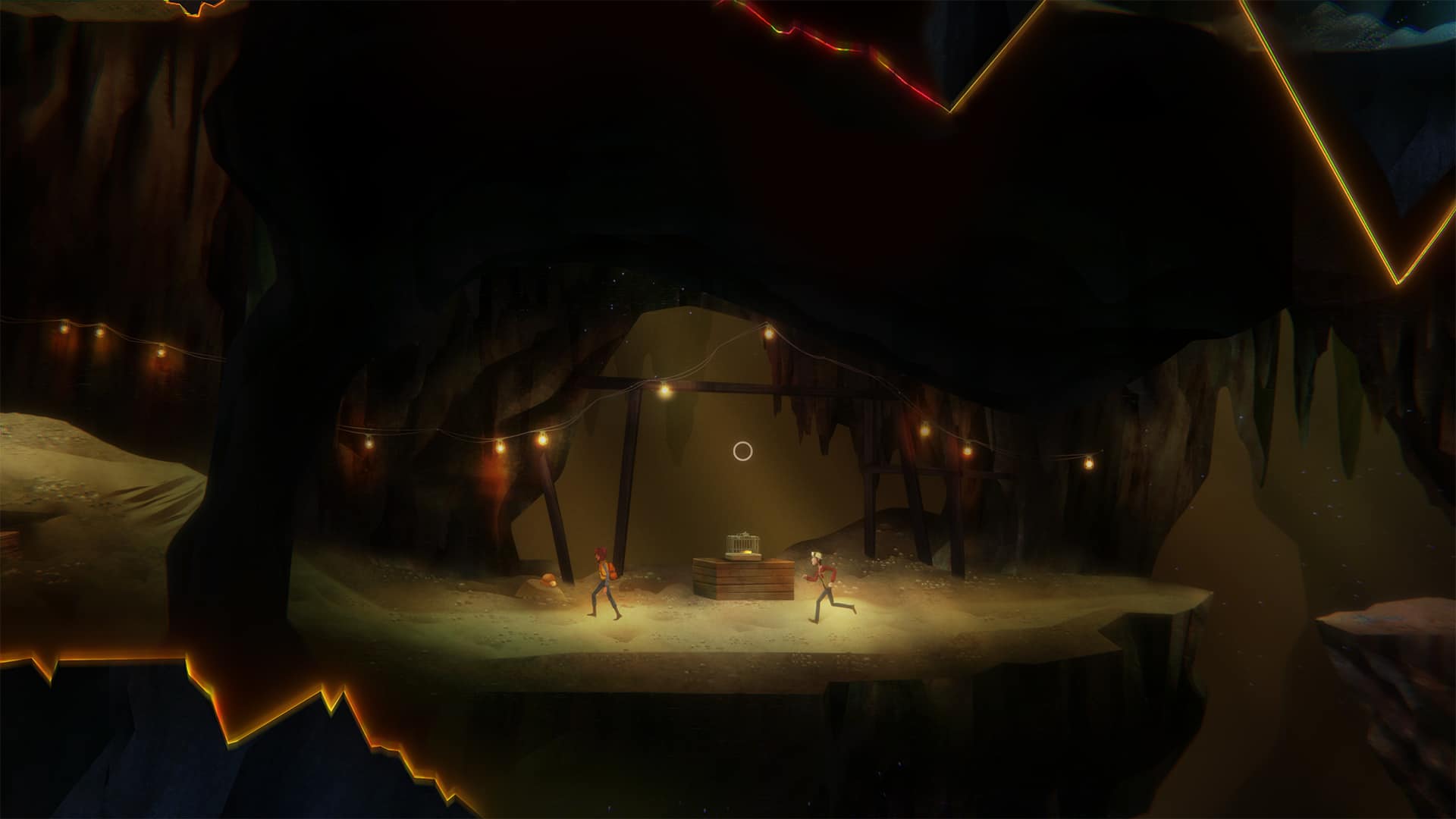 One final point a bit removed from the game itself, this virtual preview event was held on the day following the news that Night School Studio had been acquired by Netflix, marking the streaming giant’s first major foray into the world of video games. It seems like Oxenfree II is far enough along in development to not really be impacted by this, but I’m still immensely curious to see what this massive move means for the future of one of my favorite formerly independent studios. The prospect of having them help mold Netflix’s gaming strategy and, in turn, receiving an audience of 200+ million subscribers seems genuinely exciting. Let’s just hope they’re allowed to keep making the unique and interesting kinds of experiences that they’re known for.

Oxenfree II: Lost Signals feels like the exact kind of expansion to the universe that I was hoping for. It isn’t retreading the same ground, but instead focusing on the consequences of Alex’s eventful night on the island. The new characters seem like fantastic hangs, the time mechanics look to bring an entirely new set of spooky mysteries to the table, and the expanded vocabulary of player verbs points to a story that will feel even more personally authored. I’m absolutely thrilled to jump back into this world sometime in 2022 on PC, PlayStation 4 and 5, and Nintendo Switch.