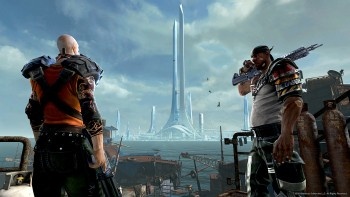 Let’s start out with a probably-true supposition: Say you’ve played Valve’s Team Fortress 2. You’ve been playing TF2 for a while – you’re practically a pro! – but when you started, you weren’t that great at it, were you? You probably felt a bit overwhelmed. “What’s going on?” Where were you supposed to go to push the cart? Why did you just blow up after you stepped on the spiky ball? Now imagine that every character class has an ability or three to manage in addition to their weaponry. You need to learn everything I talked about, plus more on top. Now imagine that you’re taking up the controller in front of dozens of other people on a show floor so loud it’s hard to hear yourself think.

Sounds a bit daunting, doesn’t it?

That was the situation I found myself in when I picked up the controller to test out the Brink multiplayer on the PAX 2010 show floor. The level seemed pretty similar to the classic TF2 escort scenario: On the one hand, you have a group of order-enforcers (us) who need to escort a maintenance robot to its destination. On the other, you have a force of revolutionaries (them) who need to stop it at all costs – and both sides need to kill as many of the other as they can.

While it’s easy to imagine that a gamer able to take his or her time with Brink – or who plays through whatever passes as a tutorial – will be able to dive into the game and start swimming towards happy-gamer-ville, jumping into the game on a crowded show floor felt more like drowning. “You’re a medic,” I was told, “You can revive yourself after death once.” But it took precious minutes to just figure out how to do that – and I don’t think I even had the UI completely understood by the end of the session! It certainly doesn’t help that for such a fast-paced, stylized game, the enemy silhouettes don’t feel all that distinctive. You want to take your enemy’s medics down fast, but it’s hard to tell who the medics are – and that’s just getting started.

But that’s the bad news. Here’s the good news: The actual gameplay is pretty darn fun when your team works like one. Medics can throw emergency revival syringes to downed players and heal and buff their teammates’ health, technicians can repair your crucial maintenance ‘bot and throw down temporary auto-turrets, and assault soldiers can plant bombs, buff your weapon damage and generally absorb more punishment than the next guy. If a cohesive, well-oiled machine of a team works together, the game is a ton of fun.

Of course, if you don’t work together, then you’re pretty screwed. That was our team for the first ten minutes of the match. We blew the door, we got the ‘bot in, and then we were met with a stalemate. It gave you a lot of time to appreciate the well-worn, grungy graphics of the boxcar city environment as you vaulted over objects only to run directly into the coordinated fire of your foes. But then, something happened: We started working together. Assaulters took the front, I kept them topped off, and our engineers took up the back.

Unfortunately, it was too little too late. But those brief moments of shining success almost made the floundering frustration of the first part of the match worth it. Almost.

Brink is scheduled for Q3 of next year, and hopefully before then we’ll get a chance to play with the awesome-looking character creator for more than thirty seconds.