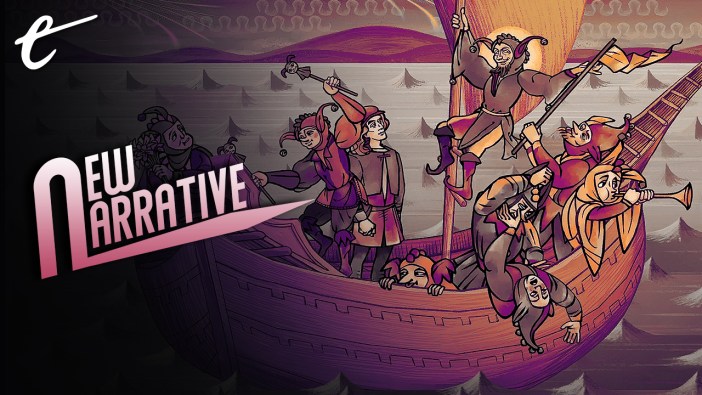 Obsidian Entertainment’s Pentiment deftly avoids a problem in video games that has come into focus this year.

Early this year the release of Horizon Forbidden West was marked by complaints that its protagonist, Aloy, was unbearably chatty, verbalizing ceaseless reminders about where to go, how to solve puzzles, and generally what was at stake. Now, at the end of the year, similar complaints have been leveled against God of War Ragnarok, as the deuteragonist Atreus voices thoughts about what to do next and how to do it.

One explanation for this design choice might be that video game blockbusters are increasingly unwilling to let the player break flow by spending too much time on a given element of the game. It might be better to annoy with over-explanation than to frustrate with something that takes too long to think about. Another explanation may be that, as the graphical fidelity of game worlds ramps up, our ability to parse those worlds goes down and we need workarounds not to get lost. In other words, the reason Atreus is chatty is the same reason Forbidden West’s and Ragnarok’s climbable surfaces are highlighted yellow or marked with conspicuous runes — the player needs to be able to navigate the visual noise.

Whatever the explanation, there is undeniably a tension here. Have the characters tell the player too much and it could be annoying; have them say too little, and it might be disorienting. In this context, Pentiment’s old-school design feels refreshing. The emphasis on simple yet evocative art and unvoiced text overcomes the problems faced by the year’s more mainstream releases.

Perhaps unsurprisingly, given its Obsidian origins, Pentiment is cut from the same cloth as the likes of Disco Elysium or Planescape: Torment — a narrative-led RPG that is heavy on well-written prose and unusual world-building. It raises questions about history, philosophy, religion, class, tradition, personal fulfillment, and many other grand themes under the guise of a 16th century murder mystery set in and around a Bavarian abbey. 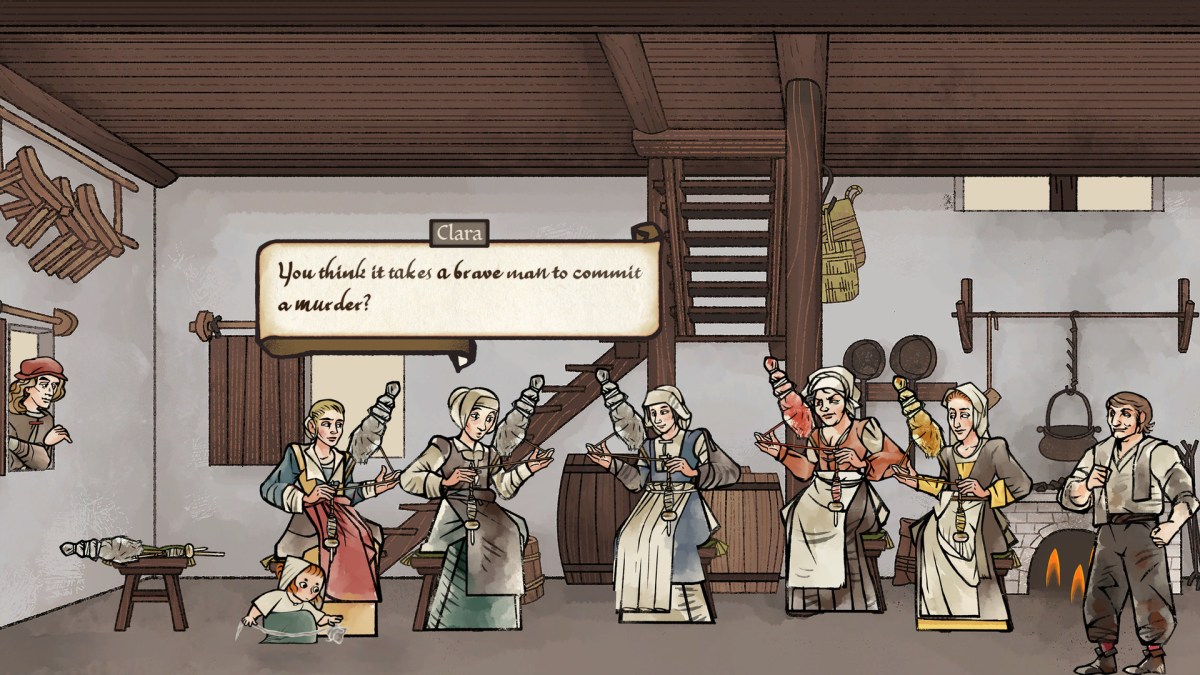 The art is rendered in the style of medieval illustrations and marginalia — colorful 2D characters against equally colorful 2D backgrounds. While there are some minor issues with navigation in certain areas, this design choice mostly solves any concerns about environments being too busy to be easily read.

Meanwhile, the emphasis on unvoiced text sidesteps the problems with overly chatty characters. Arguably the most original trick in Pentiment is the use of different font and font animations to evoke different personalities. The town printer, for instance, speaks in a font that looks like the workings of a printing press — letters are stacked together and then pressed into his speech bubbles. Some characters seem to think before speaking, so their dialogue is initially rendered in faint outline and then traced over as they speak. Others get anxious and their speech tumbles out riddled with typographical errors that are hastily corrected.

The font variations are an ingenious way to convey our paralanguage without resorting to intricate voiceover or animation, but it’s also a primer for the player’s imagination. It’s a reminder that certain things need to be read in a particular way and that the player needs to invest some effort into the act of reading, rather than passively absorb the information presented to them.

This information is frequently relayed through extensive internal monologues, which can often be expanded further by selecting an optional thought cloud. They analyze various aspects of Pentiment’s narrative — from what to do next and where to go, to how the player character feels about certain situations or people. In other words, it’s exactly the same tool as the one deployed in Horizon and God of War. Indeed, in many ways it is more extreme, since it can go on for several minutes and takes narrative center stage rather than remain contained to a throwaway remark. 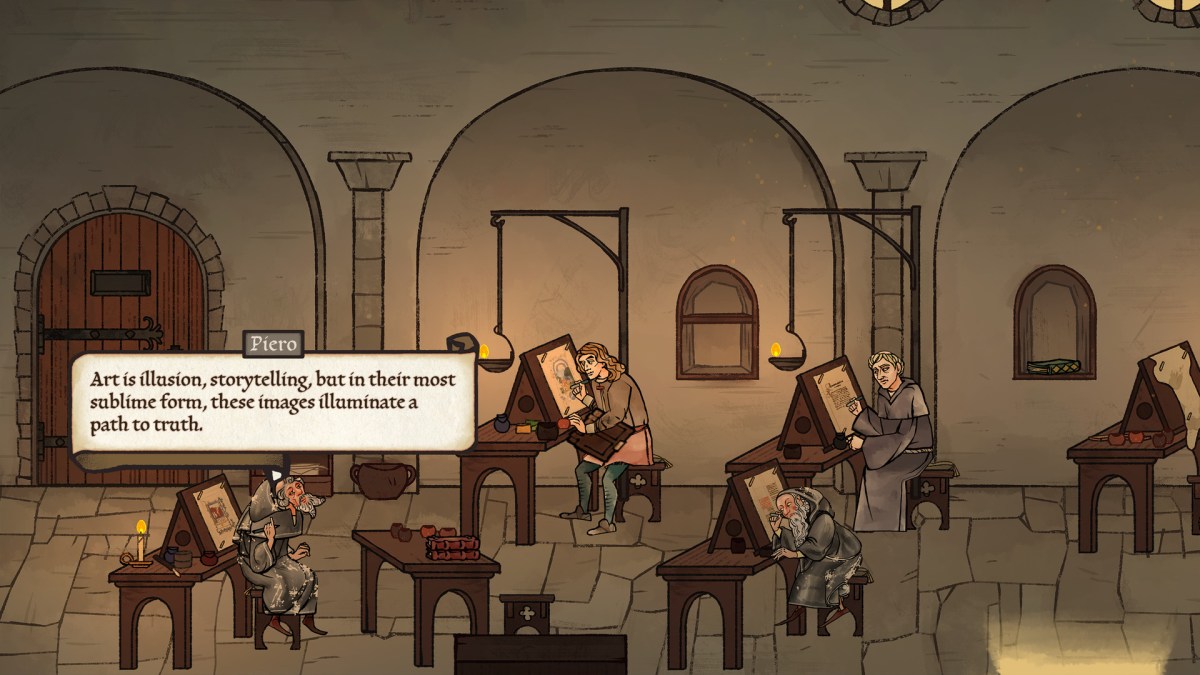 One difference is no doubt the premise. It makes sense that a game about solving a murder mystery would feature the main character’s internal deliberations more than one about killing robot dinosaurs or about teaching your son how to murder a pantheon full of gods in the name of living peacefully in a wooden shed. But I think the key difference between these gameplay mechanisms is just the emphasis on unvoiced text.

The act of reading a sentence resembles the act of thinking that sentence. It’s not the same, of course, since the reader doesn’t think up the sentence that they read, but there are obvious similarities. A controversial but popular philosophical theory says that thinking occurs in a language — a kind of language of thought. Languages are typically understood to be compositional, which means that the meanings of complex expressions are at least in part functions of the meanings of the simpler expressions that make them up. If we think in a language and that language is compositional, it follows that we form more complex thoughts by thinking about the simpler elements that make them up.

Reading feels relevantly similar to this. As Pentiment puts a speech bubble in front of me, individual words gradually assemble into sentences and I come to understand their meanings. I might not be producing the thoughts Pentiment wants to convey, but I am reproducing them in a way that feels most faithful to that original production. The use of expressions like “I,” which in a game do double duty in referring directly to the protagonist but also to the player, help sell the illusion that I am the one doing the thinking. As Schopenhauer put it — figuratively, of course, but the metaphor helps to make the point — “reading is thinking with someone else’s head instead of one’s own.”

There is ultimately nothing new here; text-based games are as old as video games themselves. Nor is it something unusual: The likes of Roadwarden and Citizen Sleeper prove that text-heavy games are as popular in 2022 as they were in the heyday of Zork. The point is rather that sometimes text is irreplaceable. For all the technology that might be thrown at a game, the intrinsic properties of text and how we interact with it can’t be replicated.