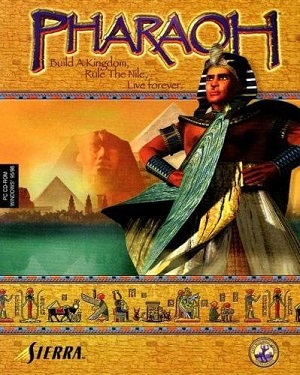 The classic city building game set in ancient Egypt can make you feel like a pharaoh or a failure.

The Bedouins are trying to kill me, and Pharaoh is annoyed that the shipment of gems he requested has not arrived. He’s sent me out here, to the desert, beyond the borders of Egypt, to build a city and send back the riches of the rocks that peek out from the dunes. The Bedouins are understandably upset that I’ve marched into their territory and set up shop. My citizens are complaining loudly that they only have one kind of food to eat, that the mines are noisy and smelly, and that the forts of archers and infantry I have built are unsightly. There are plenty of jobs in the mines, but no one wants to live near them. The little shanties I built to supply my industry with workers and to keep Pharaoh happy with shipments of copper, gold, and gems dry up and disappear. Tiny pixelated families pack up all their belongings and leave for a better life back in Egypt.

I am the worst city planner this desert has ever seen.

Pharaoh is the first city building game I ever played, and picking it up again for this review brought back a lot of nostalgia. I excel at building happy cities in lush maps where water is plentiful, farming can be pursued, and the biggest concern of my citizens is when I will declare another festival day. Toss in something like an enemy army along with difficult terrain however, and I become a panicked bureaucrat, struggling to keep up with my Pharoah’s increasingly complex demands.

It’s funny, because on the surface your objectives often don’t seem that difficult. The main goal of each map is usually to just reach a certain population level. Some also require monuments to be built or put you into conflict with Egypt’s enemies. No matter your overall goal, most of your time will be spent handling housing progression, a process that can be a bit boring in its linearity. Houses won’t upgrade unless a specific order of goods and services are supplied, and a breakdown in the chain can cause your beautiful block of estate homes to crumble back to mere modest huts. Even with this supply chain coming into play, the game’s advancement and technology trees are relatively easy to grasp, even at their more advanced levels.

The real challenge in Pharaoh is building efficient, functioning cities, something that involves a lot of traffic control. As you build your cities, you’ll encounter two types of citizens walking your streets: roaming walkers and destination walkers. The roaming walkers, as their name suggests, wander around somewhat randomly. The destination walkers, meanwhile, are essentially delivery men; taking chickpeas from the fields to your granaries, or completed pottery to the storage yards. They act independently, completing their tasks without any need for outside interference. Directing the roamers, in turn, will be your main concern during gameplay, as success often depends on them completing their daily tasks (finding work, mining, selling food, etc.) as quickly as possible. 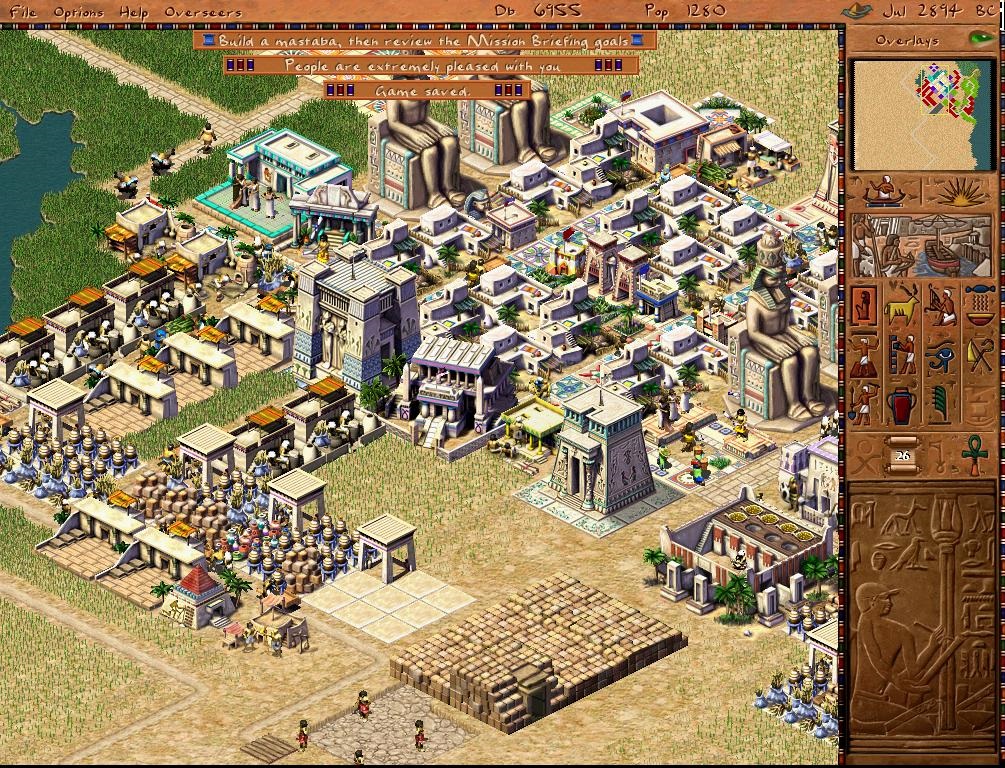 Getting them from point A to point B, generally means building roadblocks and carefully designing your streets so they go where you need them to go with minimal dilly-dallying. Add in the fact that they’ll only travel a limited distance and even a single errant intersection can be a productivity killer that tips the scales toward defeat.

How you choose to handle this, of course, is up to you. In my case, I built more efficient paths by constructing housing blocks in large loops, ensuring that my citizens had regular access to basic necessities like food, water, and structural review by architects. Even this, wasn’t foolproof though. I often found that if I used too many roadblocks, employment recruiters (also roamers) would have trouble reaching my unemployed citizens. I had to practice to achieve a balance that combined optimal efficiency with the necessity of freedom. It’s a process that takes some getting used to, but it’s ultimately one that I found to be really satisfying. You might have to invest time into learning the best ways to do things, but it’s well worth it when a tough mission ends in victory.

Even enjoying the game though, my favorite part of my experience with Pharoah was, ironically, its manual. Beautifully illustrated and 270 pages in length, it’s as much a primer on Egyptian history as it is a “how to” guide for playing the game. Of course, Pharaoh simplifies reality, having you manage the affections of only five gods instead of the huge pantheon that grew and changed over the almost 2000 years of history during which the game is set. Still, the music, visual style, and missions are all steeped in Egyptian history, and the historical context offered by the manual added depth and flavor that I’ve found to be missing in games like Civilization. Seeing the pyramids rise in Gaza as I look on in Pharaoh is a rousing triumph. Hearing that the Vikings have beaten me to it in Civilization V is creative anachronism that, for me at least, makes choosing to play as the Egyptians feel less unique.

Depending on your tolerance for its learning curve and AI pathfinding, Pharaoh can be either a richly inspired challenge or a grating frustration. For me, the well-researched setting and the joy of seeing my monuments rise up out of the desert sand was enough to keep me coming back, even when my palace burned down because I’d neglected to build a firehouse nearby. Just speaking personally, I’d say it’s well worth trying, especially for just $9.99 at GOG. See you in the mines!

Come back next week to catch my further discussion of Egyptian culture and why we should see more of it in video games.