It’s the end of the line. We went from Aristotle and Plato to empiricism with David Hume to Marxist aesthetics with Theodor Adorno. It’s been a haphazard, horribly incomplete survey across several different branches of Western philosophy. Some would say it was rambling – and to them, I would counter that all who wander are not lost.

But now our philosophical wandering is more or less ending here, with our discussion of more experimental, emerging game design practices. There aren’t any more large sweeping fields of philosophy left to generalize, save for one.

Postmodernism is generally an umbrella term that encompasses several different philosophies: deconstructionism, post-structuralism, post-post-deconstructralism … okay, I made up that last one. But the operative word here is “structure” – such games are generally trying to interact with the form of a game itself or the underlying structure, chopping up rulesets and mechanics and criticizing them. These kinds of games are neither roller coasters nor playgrounds; they’re big messy interventions.

Games like You Have to Burn the Rope or pOnd exist as somewhat cynical attacks on the modernist program of games we’ve been discussing previously in the series, targeting “accessibility” and “artistic value” respectively. Here, a good game critiques popular design practice, often through satire, parody, or humor.

You Have to Burn the Rope gives explicit directions on how to beat the game – such as the instruction in the title itself – which runs counter to the genre convention of boss fights in platformers, where a player must carefully observe a boss to identify weaknesses and conceptualize a moving / firing solution. In doing so, this game argues that if we are willing to make such games easier, why not do away with any and all meaningful concept of difficulty? Well, for one thing, the result is absurd. (Meanwhile, pOnd is best played without knowing anything more about it. To analyze it would destroy it.)

These games promote deep knowledge of genre traditions in mainstream videogames and they’re asking us to be more critical of them. They’re the games that designers make in order to remain in dialogue with one another.

That’s where our traditional philosophizing ends, with the postmodern games that analyze the form of a game itself.

Why? Well, part of the reason is that philosophy itself is even more uncertain of what it is today. No other discipline in the world is so intent on its own destruction. “Philosophy is dead” will often be the central idea of half the papers at any given conference. Thus, my past practice of pigeon-holing game design practices into philosophical movements is no longer tenable.

Instead, I’m going to attempt a survey of emerging game design practices that don’t fit neatly under a philosophy. Or maybe they do, in which case you should tell me.

Generative Proceduralism is about abdicating developership of a game. It’s about a game that partly designs itself, or a painting that would paint itself. Sure, we can argue about what an author meant by a particular word, or why a composer applied a crescendo at the end of a piece, but what if a level designed itself, and how would it reconcile authorial intent with that? This approach argues that a good game is comfortable in relinquishing strict authored control. (Compare this to the highly scripted, highly linear haunted houses of the Call of Duty and Medal of Honor series.)

Do we blame Derek Yu for an impossible cave level generated in Spelunky? Do we blame a fictional AI director for “screwing us over” even though it’s just a collection of random number seeds and formulas, as in Left 4 Dead? Such games relegate some of the design work to the game itself – and possibly the most ambitious games, such as Façade, attempt to procedurally generate NPC backstories and entire narrative arcs.

My personal favorite variant of this approach are those games that are secretly procedurally generated. The masocore platformer Dungeon randomly generates a number seed based on the player’s computer details, and that number seed introduces a random bug or mode to the game. Thus, players offered conflicting accounts of gameplay – on some computers, spikes were secretly taller or shorter, or maybe a level would be impossible to complete – because they were all actually playing slightly different games.

But don’t confuse this for the similar sounding philosophy of …

Proceduralism, as coined by Ian Bogost, argues that games (often what we traditionally call “art games”) make aesthetic arguments through rules and mechanics. Through this “procedural rhetoric,” a good game allows players to explore emotional and psychological spaces, or perhaps offers a way of exploring pre-existing commercial games.

For example, in the Hitman series, many player strategies revolve around disguising oneself as an NPC with a high-level of security access around the level, usually as one of the high-ranking bodyguards assigned to guard the target. Thus, Hitman games make a point about the powerful: They may surround themselves with security, but the power they delegate to their security is almost always their undoing.

Or look at Beyond Good & Evil, a single-player game about the personal conflicts inherent in photojournalism. Throughout the game you receive points for photographing rare creatures – but at one point in the game, one of these rare creatures is about to devour your NPC friend. Do you rescue your friend, or do you take a quick snapshot first, to score valuable points? In photojournalism missions during times of war, to what degree is the journalist embedded in the conflict?

It is questionable whether IO Interactive or Ubisoft designed these games with such larger points in mind. Maybe they did, maybe they didn’t; in the end, it’s irrelevant. What matters is that the player extrapolated that meaning from the game through their interaction with a system of gameplay mechanics. In this way, proceduralism isn’t just a philosophy of game design, but also a philosophy of play and interpretation, which represents a significant shift from how we used to look at games in Part 1.

But some designers see proceduralism as a dead end, as more of the same structured gameplay of commercial titles instead of an interpretive shift that allows a deeper range of artistic expression. The vanguard of these designers is generally considered to be a developer couple known as Tale of Tales, who argues for a radical new genre of videogames:

Notgames borrow some elements from videogames – control schemes, approaches to real-time 3D graphics – but otherwise seek to break free of the rules and mechanics that constrain games today. It argues that rules and mechanics create gameplay loops of repeated actions, thus allowing mastery, but why craft an experience that is intentionally repetitive? When we notice how repetitive a mechanic is, we call it grinding. But in this view, almost all mechanics are a form of grinding, so why try to hide it?

Instead, notgames seek to replace this perpetual grinding with emotional abstraction like mood, tone and theme, which often relies heavily on audio and visual direction. Here, good (not)games don’t rely on mechanics; rather, they rely on simple exploration of an artfully realized psychological space. Tale of Tales’ The Graveyard and Dan Pinchbeck’s Dear Esther are two seminal works in this approach.

Many designers dislike this genre and criticize its relative lack of a canon and overemphasis on theory, that it talks too much talk and needs to walk the walk. Other designers (like me) are cautiously optimistic but aren’t exactly sure how to make a game that isn’t a game, and are waiting for Tale of Tales and other notgames practitioners to articulate something more concrete.

There is also the argument that it is never possible to break free of rules: The instant you implement some sort of interaction, that very interaction is constrained by rules. If you can simply move the camera with your mouse, that is a rule in itself; whether or not those mouse movements are meaningful and compelling, however, determines whether it is a good rule or a bad rule. By this account, pure notgames are impossible to create and exist only as low-interaction videogames. 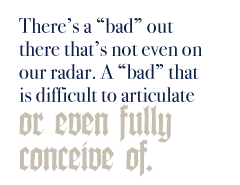 In “The Question Concerning Technology,” the German philosopher Martin Heidegger argues that people need a “free” relationship with technology because right now, we’re enslaved by it. When you begin Grand Theft Auto IV and it instructs you to “follow the yellow line” and you do it without protest or forethought, have you actually made a choice for yourself? Are you enslaved?

Proceduralism, accessibility, notgames, newsgames, social gaming. We are on the verge of something both wonderful and frightening. What could become paradise here and now could also be hell itself tomorrow.

This, I think, is the hardest question facing videogame design today, that no one wants to bring up: What damage is being done by videogames, and what is the designer’s responsibility to mitigate that damage? How are today’s videogames shaping thought?

To believe that there are only “good games” is horribly naive; this entire series of articles has been focused on debunking this collective idea of “good” and how we do not have a central idea of “good” as it pertains to videogame design. Alternatively, where is our sense of a “bad game”?

There’s a “bad” out there that’s not even on our radar. A “bad” that is difficult to articulate or even fully conceive of.

Maybe someone should do something about it.

Robert Yang is currently an MFA student studying “Design and Technology” at Parsons, The New School for Design. Before, he studied English and taught game design at UC Berkeley. If he’s famous for anything, it’s probably for his artsy-fartsy Half-Life 2 mod series “Radiator” that’s still (slowly) being worked on.

The Shadow and The Sword