Running through the opening of 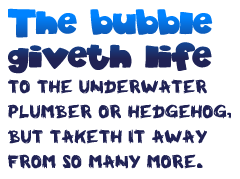 “Hey, you don’t get to use one of these very often!” I thought, and was about to make my purchase when a pang of self-consciousness made me hesitate. Would I be respected as a fan wielder? Maybe it would just be best to go with a sword. They’re classic. Dependable. Pointy.

Then it hit me: Why was I worrying about my weapon of choice when videogame history is already filled with all sorts of pacifistic-yet-deadly weaponry?

While armed warfare has predominantly leaned toward various ways to lodge pieces of metal in your opponent’s body, there is still a whole room in the gaming armory dedicated to objects such as bubbles. The bubble giveth life to the underwater plumber or hedgehog, but taketh it away from so many more. In the real world, the best a bubble can hope to do is get soap residue in your eye as it drifts kamikaze-like against your face; but in games, the humble bubble can become a wobbly sphere of concentrated pain, a swarm capable of taking down a player or enemy like a death squad of Scrubbing Bubbles brandishing adorable little switchblades.

The reach of bubbles as weaponry is pretty widespread. Bubble Bobble‘s iconic dragons, Bub and Bob, are fearsome bubble-breathers, while “Bubble” is a water attack in Pokémon that sends a deadly crawl of effervescent spit toward your foe.

The most famous of the bubble attacks, however, has to be the Bubble Lead from Mega Man 2. It is a name that has confounded players for more than two decades. Is it “lead” because the bubbles are heavy and travel along the ground or is it simply “lead” as in the slang term for ammunition? Either way, it sounds like Capcom was trying to compensate for something.

Bubble Lead is among the line of quirkier weapons that fail to have much effect on many enemies but to which Dr. Wily loves making himself vulnerable. Does he do it on purpose? If he feels like he has to go down, he’d rather make his enemy have to lob bubbles or spin like a top to do so?

Sticking to the weaker end of the elemental spectrum, puffs of air are granted a license to kill as well. We could go back to Mega Man and his propensity for firing what look like those little whirlwinds you sometimes see whip up in parking lots, but Kirby has always had a built-in air cannon all his own.

In the original Kirby’s Dream Land, before the pink puffball discovered his powers of transformative digestion, his “air pellet” attack was an integral part of his arsenal. “Air pellet” sounds substantial, but it’s just a big gulp of air fired into an enemy’s face, causing them to explode. It would be like your grandmother going to the optometrist and getting annihilated by the glaucoma test. Grabbing a mint leaf gives Kirby machine gun-like powers with his breath for when he has to take down an airship. It, also, must lead to some pretty tragic dating scenarios. 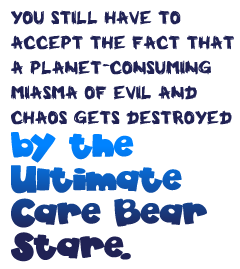 Attacks turn crazier the more intangible they become. One of the deadliest magnanimous forces in videogames by far is mankind’s own good will and unity channeled into an ethereal weapon of mass destruction.

The Rhombulan invaders of Elite Beat Agents suffer at the hands of such a strange fate after the world bands together by, of all things, dancing to a Rolling Stones cover. The entire planet begins to glow blue with what can only be assumed is pure love and joy, all of which is gathered into one point and blasted into the Rhombulan mothership, decimating the race. Ironic? Absolutely. If only it didn’t feel so good.

For some reason, we love ganging up on aliens this way. Giygas, the evil conqueror of EarthBound, is also defeated by the firepower of positive thinking. As Paula reaches out for help with her “Pray” command, the NPCs the group has influenced during its travels steadily join in prayer for their safety, resulting in exponentially ludicrous damage to the final boss. It’s a uniquely reflective battle element that spreads the weight of the experience across the journey instead of placing it solely at the end, but you still have to accept the fact that a planet-consuming miasma of evil and chaos gets destroyed by the Ultimate Care Bear Stare.

Thankfully, most players do accept it, as they have accepted Bubble Lead, air pellets and, even today, armies of sentient plants battling the undead. Although the videogame market lies saturated with games focusing on more realistic forms of weaponry, developers and players still find a place, and even a longing appreciation, for bizarre offensives.

It’s not as much of a disconnect between “cutesy” and “cool” as one may suspect. While graphics and stylization steadily mature, some concepts can be traced back to sillier core elements. Before Bayonetta was whipping her hair out, Dixie Kong and Shantae were splitting their ends across the faces of baddies. And while the “anything goes” weapons philosophy of Dead Rising plays out in gloriously gory detail, it owes a lot to the SNES and Genesis classic Zombies Ate My Neighbors, where squirt guns and soda cans were among the many improvisational arms.

Whether intended to lean more toward realism or fantasy, weapons often have the same purpose: creating a “make dead” button. Animations, hit zones, effects and other variables apply, but the
rest is mainly skins and themes. Games that wish to create more of an “enhanced reality” or “enhanced history” experience certainly have their own strict set of criteria to fill in making their weapons true-to-form while still fun to use. Titles that journey closer to the edge of fantasy, however, may not only contend with designing more abstract forms of attack, but also creating a world that appeals and feels cohesive enough to players that they are willing to go along with the rules for battle. 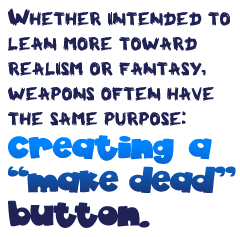 We may find amusement in the stranger weapons of the Mega Man series, for example, but it remains one of the most beloved franchises in videogame history because it has always straddled line between silly and serious so well. If you kept the weapons of Mega Man 2 – firing bubbles, leaves, flames, and so forth. – but completely overhauled the theme and stages of the title to feature, say, a magical little rabbit saving his forest friends, would the weapons still fit? They would, but would they feel as fun, creative or memorable as they have been incorporated in the Mega Man universe? Arguably no.

It is not to say that “gutting” a game will always have a negative effect, especially when the weapons have a unique personality all their own. Super Mario Bros. 2, basically a whole separate game re-skinned with Mario and friends, turned what was already a fantasy-steeped platformer on its head by making smiling vegetables into weapons. The Mario brand could have only carried the title so far, but the world of Subcon was so interesting – and tossing turnips so fun – that it remains a respected member of the series. And when a title like Plants vs. Zombies finds success in the present, it’s partly because it pulls players into a crazy, fun world with a unique arsenal that just clicks.

Adopting the weaponry of a game world, no matter how realistic or wacky it may be, is a commitment to the designers’ goals and imagination for that realm. If those aspects are sound, the commitment will pay dividends and the use of their weapons feel rewarding, whether they be guns, swords, fans, plasmids, plants, paint, music or whatever else someone may grant the power to bestow injury upon others. If it strikes chords as well as it strikes enemies, it has an uncanny ability to be absorbed into and welcomed by the general gaming community.

Tim Latshaw is a journalist and freelance writer who wields a +1 snow shovel in Western New York. He is a contributor to Bitmob and LeftStickRight and tweets @TLatshaw.

The Shadow and The Sword