No matter how brutal and nightmare-flecked the setting, no matter how many waves of unholy creatures assail the planet and no matter how unlikely it is that the young U’Kalthi pig farmer can triumph as humanity’s final hope, there’s always one ray of light in videogameland. Of all the clichés used in our favourite industry, the portrayal of medication and its relationship to health is one of the most reliable: A handy, insta-cure band-aid is as familiar as a comely elf-girl-next-door in a BioWare RPG. Games present a glorious utopia in which medicine is near-flawless, rarely has side-effects, and works its soothing power almost immediately.

All Medicines May Cause Side Effects 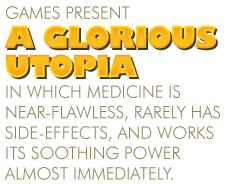 The Left 4 Dead universe is a grim and foreboding place, populated entirely by zombies, people who are about to become zombies, and enthusiastic, devil-may-care pilots. With that in mind, it’s maybe not surprising that survivors are so keen to knock back entire bottles of pain pills. But it’s a little more unusual that nobody suffers any ill effects from these decisions. Likewise, in Alpha Protocol, the only decision super-agent Mike Thorton doesn’t have to agonize over is whether it’s safe to consume every bottle of pain medication in Rome. Thorton’s missions aren’t so much a series of linear objectives as a calculated pharma-crawl from medicine cabinet to medicine cabinet.

Fallout: New Vegas takes this even further, encouraging us to down weird concoctions of untested meds prior to tricky fights (presumably we ask the mutants and Deathclaws to hold off for a bit while we fiddle with child-safe bottles and wash the tablets down with irradiated water). Curiously, these drugs never react with one another in a catastrophic fashion. There’s no ending slide with Ron Perlman soberly intoning “… and then the wasteland courier died from liver complications arising from a reckless diet of Med-X and Psycho.” Sure, it’s possible to get addicted to something and experience the highly realistic drug withdrawal effect of your virtual vision going wibbly for a bit. But guess what the instant cure is? Yet another form of medication, “Fixer.”

Out in the cold, crazy corridors of Dead Space 2, gaming’s unluckiest engineer Isaac Clarke gets slashed in the face by innumerable eldritch horrors every other second, but a magic space-med cylinder will bring him back up to speed immediately.

We’re at the point where we barely think twice about any of this. As players we have a Pavlovian response to health items. The only thing triggering in our brains when we guzzle a crate full of pills is, “Ooh, health jackpot,” when it should be, “Good heavens, my pancreas just melted.” Somebody without a morality gland could let the pharmaceutical industry know that videogames are doing a terrific, daily job marketing its products as panacea.

Check With Your Doctor 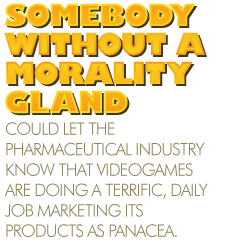 Of course, games’ obsession with medication has a lot to do with the way videogame health is portrayed. Generally, it’s a linear bar of some sort, with no particular distinction made between types of pain or illness. Sometimes a game like Deus Ex will come along and differentiate between limbs, meaning if you’re shot in the arm you need to direct a magical medical bag to that area; but Deus Ex was also a title in which you could briefly survive as just a bouncing head. The videogame hero never seems to just be feeling under the weather or suffering from a minor headache, or mostly OK but carrying a niggling shoulder injury. Credit needs to be given to Metal Gear Solid 4 here for recognizing back pain from prolonged crouching as a serious gameplay concern, but this breakthrough in medically-minded gaming is slightly undermined by one of the best cures being “Snake reads a girlie mag for a bit.”

Health kits and other medical items are by no means new innovations in the field; Doom had them way back in 1993, and was certainly not the first. Regardless of who had the initial bright idea, health packs were everywhere in games through the mid-90s. They were symptomatic (every pun intended) of the transition away from ports of vicious arcade games in which a single hit was liable to end you. Characters in this era were flimsy folk, prone to falling dead at the merest hint of a touch from an enemy. Prior to the development of the health kit, games instead plied you with extra lives, a reward that couldn’t heal your hero, but would give him another chance to leap back out of the grave.

Once developers realized that it wasn’t actually necessary to replicate the brutal change-snatching design of the arcades, things began to change. This is why Braben and Bell’s Elite, the 1984 space trading epic, had shields for the player’s Cobra Mk III vessel. Those shields were health in all but name, and a further sign of how far forward that title cast its gaze.

For health you can usually read food, shields, stamina, battery life, or anything else the game designer chooses to represent the phrase “this is the extent you can screw up before we’ll force you to reload.” The further these representations get from actual medical items the less sense they begin to make, and the implications can often be outright disturbing. We’re probably better off just not thinking about Link grabbing and consuming the hearts of his enemies for sustenance in Ocarina of Time. 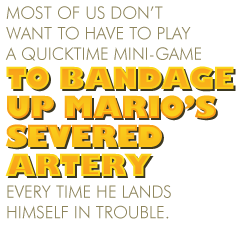 Indeed, videogame medical supplies are so far removed from their real life counterparts that it’s possible to substitute them with almost anything. A popular choice as a stand-in is the other great all-healing commodity of games: food. Games treat food and medication as essentially one and the same (though if both are present, food may be relegated to a second class healing item). There’s a weird pathological need to consume food in games, even when it would be far more rational to steer well clear. There was always something rewarding about devouring every single piece of food from a fat Baron’s parlour in Thief: The Dark Project, and lord knows how many of BioShock‘s soggy cakes people have picked out of bins and stuffed in their faces.

Yet for all their ludicrousness, these cure-all portrayals of medicinal items in games serve a clear and winsome purpose. Game heroes are an unfortunate breed that tends to find itself being shot at, stabbed or, at the very least, jostled sternly around platforms by surreal antagonists. It may seem attractive to some, but most of us don’t want to have to play a quicktime mini-game to bandage up Mario’s severed artery every time he lands himself in trouble. For all the touted military realism of games like ARMA II, it seems unlikely that many players would want to learn CPR and wound treatment in order to function as part of an effective squad when playing online. Plus, no-one is going to want to be the guy who has to level up his virtual doctorate in treating post-traumatic stress disorder.

Authenticity of action has a mixed history in videogames. Sometimes, realistic asides can provide memorable moments (though this tends to rely on the unexpected, such as being given a stern talking to by your boss in Deus Ex for exploring the women’s bathrooms), but other attempts have been less successful. Few will have fond memories of falling to an ignominious death through the rotted floorboards of a peasant’s cottage in King’s Quest: Quest for the Crown. Realistic though the consequences of improper floorboard care may be, in general we don’t want to be reminded of them.

The cliché of gaming meds exists for convenience, as a symbolic shortcut to keep our characters on their feet and engaged in activities that are actually entertaining, like kicking Orcs off cliffs, setting infected humans on fire, or blundering around alternative-future Mojave deserts in a drug-fuelled haze. So let’s doff our caps in humble celebration of the continuing legacy of the insta-cure bottle of pain pills.