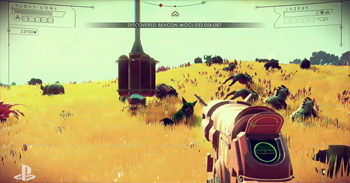 The three minute demo started with a brief look at space combat. He then attempted to demonstrate the game’s scale by showing the galactic map players use to travel, indicating that the thousands of dots of light shown as the camera zoomed further out was a star system with its own ecology.

Murray then selected a region from the map and landed on a planet’s surface, exiting the ship. The planet he wound up on(randomly selected, though the demo was designed to ensure he would land near one of the planet’s beacons) had no signs of life on an initial scan, but it did provide an opportunity to demonstrate the game’s fully destructible environment. Sentinels, robots programmed to protect planets then approached and chased him off with some laser fire.

Escaping underwater did prove fruitful, though, with the discovery of some fish and creatures which looked like conceivable variations of known animals. After logging them, Murray demonstrated how players upload these discoveries in exchange for cash at beacons, though not before dispatching a flying drone with a laser pistol.

The idea of seemingly limitless exploration possibilities still seems difficult to grasp. But, with no release date announced, Hello Games still has some more time to get it across. Regardless, No Man’s Sky continues to be one of the more intriguing games coming to PS4.