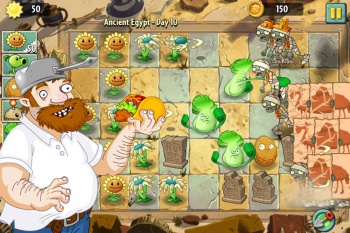 The sequel to PopCap’s 2009 hit may have been delayed due to a “truckload” of money from Apple.

According to Polygon, a source familiar with EA has pointed to an October launch for the Android release of free-to-play sequel Plants vs. Zombies 2. The iOS release took place on Aug. 15 and quickly took a zombie apocalypse-sized bite into the App Store market, being downloaded almost 25 million times as of the end of that month. A release on the Chinese Android market occurred earlier in September.

Interestingly enough, Giant Bomb just reported today that Apple apparently paid EA a hefty sum to delay the Android release of Plants vs. Zombies 2, making it a timed exclusive on the iPhone. “Apple gave us a truckload of money to delay the Android version [of Plants vs Zombies 2],” Frank Gibeau, head of EA Labels, reportedly said during an internal town hall meeting.

Timed exclusives and large sums of money being passed by hardware owners is certainly nothing new to gamers, but the fact that it’s happening with a freemium game on mobile platforms is certainly noteworthy. What do you think? Is this a sign that mobile games are entering the big leagues, or is Plants vs. Zombies 2 just a rare breed among phone games?

FIFA 14: UK Shafted in Pricing While US Gets Incentive