An upcoming festival in Brooklyn will let players play massive games that include live-action versions of classic Atari titles. 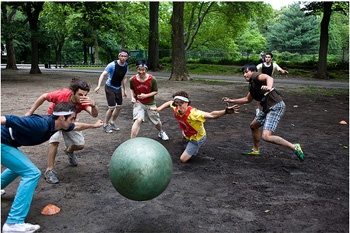 If you’re a gamer near Brooklyn who’s looking for a new way to play some classic arcade titles -as well as some crazy live-action games with hundreds of other players- you’re definitely in luck. A two day-long festival is coming to the city in a couple of weeks that is designed to “explore the limits of play” through different neighborhoods.

The 2010 Come Out and Play Festival, which takes place June 4-6, will operate out of the Brooklyn Lyceum and will allow players the opportunity to partake in dozens of games. Reading through descriptions of the various games on the docket, the whole festival sounds like a blast.

The games in the festival span the spectrum of genres, but videogame players are probably going to be interested in the live-action versions of Asteroids (where you’ll have to shoot “human asteroids”) and Kaboom! (requiring players to catch black water balloons dropped by someone running back and forth across a massive balcony). Also, the festival’s official website talks about some other games that might appeal to this type of gamer: “Players will track each other in high-tech hide-&-seek games like HALI and Geo Melee. These games break free of TVs and tiny cellphone screens and return the action to the great outdoors.”

Of course, there are also games that don’t rely on iPhones as play tools. One particularly interesting and imaginative title is Unwritten Storybook, which was created by Walt Disney Imagineering: “Playing the heroes of this real-world adventure across Brooklyn, your interactions with other teams of characters will determine whether you live as allies or enemies. All stories culminate in a festive gathering where the characters assemble together to write the final chapter over a feast of food and cider.”

The whole festival sounds, quite honestly, amazing. And fun. And like something that any gamer would be proud to be a part of. The best part, though, is that the festival is totally free to enter into; if you’re in the Queens, NY, area and have some free time to participate in the event, you should definitely check it out.