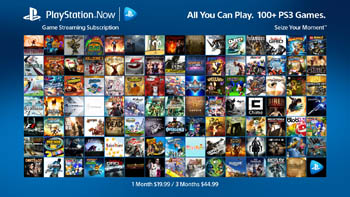 PS4 owners who never got to play PS3 games can buy a subscription plan from Sony to stream past games.

Sony will launch its subscription service PlayStation Now for streaming PS3 games on January 13 in the United States and Canada. Sony offers two subscription plans for a month plan and a three-month plan.

The one-month subscription is available for $19.99, and the three-month subscription costs $44.99, which would be roughly $15 a month. Select games have been available through the service already, pricing game rentals for a few hours to 90 days. The prices are different from game to game.

The new subscription service gives PS4 users access to over 100 PS3 games, such as The Last of Us, Ratchet & Clank: Into the Nexus, Spelunky, and Bioshock Infinite, and more. Additional games will arrive through the service.

“Users have been able to rent games through PlayStation Now for several months, and one of the top requests we get is for an overall subscription to the service,” Phil Rosenberg, Sony Computer Entertainment America’s senior vice president, business development, and publisher relations, said. “We’re excited to formally announce it today, as the PlayStation Now subscription service will deliver a ton of value by providing instant access to a large and diverse catalogue of games for one low price. We know there are lots of PS4 owners that never owned a PS3, and this is a great way to catch up on games they may have missed.”

A seven-day trial will be available when the service launches; if you’re worried about how your internet connection will perform, this will be a free method to determine whether the service is worth it for you. PS4 users can download a free PlayStation Now theme soon; doing so will count as an entry for a chance to win a one-year PlayStation Now subscription.

Sony stated PlayStation Now will come to other devices in the future.