I knew I was asking for a certain level of uncomfortable feedback when I reviewed Act of Valor last week. I had figured that the film’s unique production circumstances, i.e., the incorporation of authentic Navy SEAL live fire exercises into action scenes and real SEAL operators portraying the main characters, would require a more delicate than usual delineation of what was and wasn’t working in a performance. It’s a different thing to say “I’m not buying Tara Reid as a scientist” than it is to say “I’m not feeling your portrayal of yourself in a recreation of your ridiculously difficult and dangerous job.”

What I wasn’t exactly prepared for was the negative feedback I got for not giving it a negative enough review. Or, rather, for having anything remotely positive to say about it. The rationale for outrage in this case was that some felt I should’ve come down much harder on it because it was, in their estimation, a propaganda film for the U.S. Military.

Now, admittedly, the involvement of active duty operators and the film’s origins as an in-house promotional reel makes the specter of “The P-Word” impossible to ignore, though I wonder how many of the aggrieved parties in this case realize that any movie where you see real U.S. military equipment has to be made in cooperation with (and deference to) the military itself. The prospect was very much on my mind going into the film.

Having actually seen it and researched its production in preparation for reviewing it I didn’t find Act of Valor to be a propaganda film or even an especially political one. It lacks the overblown glamorization of, say, John Wayne’s The Green Berets, or even the big picture message mongering of Why We Fight. It’s a curiosity piece for military buffs before it’s anything else and doesn’t seem to have a message other than “Navy SEALs are some badass dudes,” which is kind of hard to argue with if you ask me. The only area where it approaches the troubling realm of propaganda, in my view, is in the lack of discernible moral or character flaws among its main characters, but then again, the one-dimensional good guy hero is hardly an affliction exclusive to military films at this point. In fact, to be perfectly frank, the Transformers films or the legions of cinematic heroes whose superhero level goodness/skill levels are handwaved by their being “ex-insert-branch-of-army-here” are much closer to propagandizing than anything in this particular film.

But I get it. The reflex reaction among many folks to regard any non-critical portrayal of military action (and American military action in particular) as having a sinister motivation is something that occasionally gives me pause, but it’s worth remembering that Americans (and America watchers) are still recovering from eight years of a Presidential regime that really did engage in military stagecraft as political showpieces. I don’t necessarily agree that this particular film rises to anything approaching that, but the skepticism is entirely understandable.

Also not helping matters? A vocal contingent way on the other side of the spectrum that actively wants Act of Valor to be a propaganda film. Big Hollywood, a website that filters movie coverage through a prism of right-wing paranoia and gives politically-minded celebrities a place to make public fools of themselves (yes, that’s the Adam Baldwin you’re thinking of) has been obsessed with the film for months, and are now fixated on the idea that its modest box office success, if not its very existence, represents some kind of politically relevant moment in the popular culture, as “The Real America” rises up against “Liberal Hollywood”.

(NOTE: Andrew Breitbart, the proprietor of Big Hollywood, died suddenly at age 43 one day after the writing of this article was completed. He leaves behind a wife and four children.) 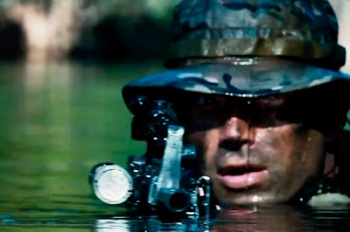 This is the world we find ourselves in: A movie with nothing much to say has one team denouncing it as propaganda, and another team responding with, “Hell yes, it’s propaganda! Hooray!” And people say I’m too cynical.

A lot of this feels grounded in one of the great “received wisdom” quotes of the age: “Everything Is Political.” The problem with that saying is that it simplifies a more complex truth as understood by the journalists and political analysts that popularized it. Phrased more accurately, it means “Everything has a political ramification.” For example, there’s nothing innately political about the phenomenon of Bronies, however, it could easily become part of the political discourse. After all, a male fandom for a female-targeted franchise could easily be seen as a (small) part of the broader discussion of the breakdown of superficial gender-divisions in 21st century culture, which is frequently seen (positively) as part of the LGBT-acceptance/equality movement or (negatively) as a conspiracy by “liberal feminists” to “emasculate male identity.” So there ya go, and yes, I fully expect “Bronies: What Has Feminist Academia Done To Our Boys?” to be a Fox News headline/story within a year.

The problem with this kind of thinking, seeing the political ramifications of every piece of news or entertainment, is that while it’s great for being an activist or a political campaigner, it can make you overly combative in other walks of life. Since this is the internet and everyone knows everything about everything, more people than ever are walking around with their political ramification antenna up: “Oh, a George Clooney movie? He’s a Democrat. I don’t like Democrats. If his movie does well, that means he might get more popular and use his popularity to advance his political ideas. I hope that movie doesn’t do well.” Or, conversely, “A movie with soldier heroes? Hmm, Republicans are supposed to be the pro-war guys, and I don’t like Republicans. I hope that movie fails!”

Go ahead and laugh, but I’ve seen people make leaps like that over much more seemingly random stuff. I live in Massachusetts – do you have any idea how many “liberals” there are who don’t want to publically admit to enjoying Country Music because, and I’m quoting, “that’s Red-State music!”? (I assume the same holds true for Republicans and Lady Gaga, but can’t verify firsthand.) Heck, since we’re on a videogaming site right now, would it surprise you to learn that the above mentioned right-wing movie site routinely goes bananas at the sales figures for the Call of Duty franchise, which it interprets as validation that its political stance(s)re: the military, terrorism, etc., is being embraced by a younger generation?

Perhaps this is a futile hope, given that the U.S. looks poised to enter one of the most divisive Presidential elections since the Civil War (and certainly of the modern era), but maybe it would be prudent to remember that, while everything in popular culture may be easily repurposed in a political light, it doesn’t necessarily follow that everything in popular culture was therefore designed to be. I don’t regard Act of Valor as right-wing propaganda for the same reason I don’t see Big Bird as a mouthpiece for The Socialist Agenda: lack of evidence. Reducing everything that falls within your field of vision into either a help or hindrance to whatever “team” you ally can only lead to missing out on a lot of stuff you might otherwise enjoy and it’s probably not good for your blood pressure, either.