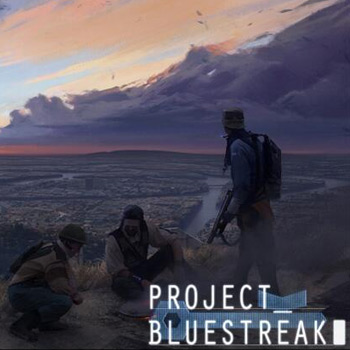 The folks at Boss Key are being understandably tight lipped about BlueStreak. However, Bleszinski has reveled, via Reddit AMA, that the title is a PC-based, free-to-play sci-fi arena shooter. And considering CliffyB’s history with Unreal Tournament and Quake, an arena shooter is right in his wheelhouse (which could be a very good thing).

The more I look at this picture, the more confused I am. The Hollywood sign is clearly visible in the foreground, but there aren’t any rivers in downtown Los Angeles. So, either someone left the faucet running, or something Armageddon-y is happening in California. And all of that scary lightning probably suggests the later.

A handful of people are extremely suspicious of Bleszinski’s choice to reenter the arena shooter genre so quickly after a new Unreal Tournament title was announced. And at this point in time, its difficult to tell if BlueStreak will be anything more than a UT ripoff or if Bleszinski is actually breaking new ground.