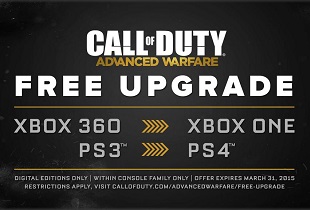 Similar to Activision’s policy with Destiny, anyone who buys COD: AW on the Xbox 360 or PS3 can upgrade to next-gen for free.

Activision has announced that customers who buy Call of Duty Advanced Warfare for the Xbox 360 or PlayStation 3 can upgrade to the Xbox One or PS4 version of their seminal shooter for the low, low price of zero dollars.

Anyone who purchases a digital copy of COD: AW for the Xbox 360 or PS3 can upgrade their game to the Xbox One or PS4, so long as they’re staying within the family (meaning you can’t upgrade your PS3 copy to an Xbox One copy). This limitation does come with a silver lining, however, as both of your Microsoft or Sony consoles will retain a COD: AW license. In other words, you can play on your Xbox One, then revert back to the 360 to play online with your last-gen-not-yet-next-gen gaming buddies.

The upgrade is available until March 2015, and applies to digital copies only (no discs allowed). Every COD: AW add-on is included as well — season pass, digital content, and so on.

The decision keeps Activision in line with its upgrade policy change on recent titles, including Destiny, fully abandoning the $9.99 upgrade fee that was attached to Call of Duty: Ghosts. In fact, most next-gen upgrade offers have come with a price tag, including COD’s arch-rival, Battlefield.

With the holiday season right around the corner, my guess is some of you will be finding an Xbox One or PS4 under the Festivus pole. If new console hardware is on the horizon, at least you don’t have to be gunshy about investing in this Fall’s big releases, with COD: AW and Destiny being two of the biggest.

Twitter is Suing the U.S. Government over Surveillance Disclosures