“We set out to do a ‘poor man’s version’ of Salem [Massachusetts], but we came to realize Salem is sort of already … there. Everything we’d think of – bumper sticker, postcard, whatever – to use as a parody actually exists there.”

This week’s subject on Escape to The Movies is ParaNorman, a stop motion animated horror movie for kids. Set in the fictional New England town of Blithe Hollow (modeled on Salem, Massachusetts), it concerns a misunderstood young boy who can see and speak to ghosts and who becomes the only hope of stopping a zombie outbreak and solving a dark mystery involving the town’s local legend of a Colonial-era Witch Trial.

“Our CEO is a brave, brave man. He wants Laika to have a voice that’s different. To be challenging. We don’t want to be making Pixar movies or DreamWorks movies. Coraline was a major statement.”

The film comes courtesy of Laika, an Oregon-based animation house built from the remnants of the once-legendary Will Vinton studios with a mission statement of going against the grain of mainstream theatrical family films. Their first film, Coraline, wowed audiences not only with an inventive use of 3D but with a dark, creepy vibe more in the vein of a grownup horror movie than a safe kid’s flick. ParaNorman isn’t going for quite the nasty edge that Coraline was (it actually has a more melancholy, somber approach to the supernatural), but it’s still a big departure from what many would normally call “family fare.” Sure, there’ve been scary movies for kids before, but often using fairytale mythology or the “safe” iconography of Halloween as its groundings. ParaNorman‘s playbook is coming more from the realms of Lucio Fulci, John Carpenter and Sam Raimi.

“A lot of family cinema today … a lot of people play it safe. I don’t just mean scares, I mean subject matter. You remember Snow White because it scared you.”

Shortly before the film officially opened, I was granted a chance to join a roundtable interview with Sam Fell and Chris Butler, the writer/directors of the film. The quotations in this column are taken from that interview, where Fell and Butler discussed (mostly at the same time, talking over one another and finishing each other’s sentences in the familiar manner of close collaborators) their process, inspiration and hopes for the project.

“Part of this is that old tradition of … you have to show children, let them confront and say, “Yes, the monsters are real, but you can defeat them.” “

Scary movies for kids are always a risky and difficult prospect, only partially because it can be so hard to determine where the line is. The definition of scary, especially in the visual sense, can change a lot as we age, and not always in the ways one might expect. I remember once, during my retail days, a parent coming to me to inquire whether The Incredible Hulk movie would scare her son (he looked about six, had recognized “Dah HULK!” on the cover and would not put it down.) I actually had to stop and think on it – my ultimate conclusion being “Well, that’s up to you ma’am, but honestly I think The Hulk is scarier for adults than kids. Adults relate to the scary/sad part of what happens to him – to kids, it’s kind of just a guy who turns into Shrek when he’s mad or to fight bad guys.”

“We tried to … it has a PG Certificate, it’s a family film. As many people as we talk to, reactions are different. Some five-year-olds go to see The Dark Knight, some ten-year-olds are scared by this. I think it’s up to … mum and dad, right?”

The point is, children and adults are wired differently. We don’t relate to the world in the same way, and it colors both our sense of what scares us and also what the reaction to it should be. This is, partially, the running subtext of the film. By the time the story begins, Norman has been able to see and converse with ghosts for so long it’s both part of his daily routine and a difference that he’s now resigned to. He’s tried to tell people in the past, and it’s made him a target for bullies (while ostracized by everyone else) at school. More problematically, it’s strained his relationship with his well-meaning parents. After a particularly humiliating public experience (in the movie proper, Norman’s problems have escalated to include horrifying prophetic visions) he laments to his mother that he believes his father is actually afraid of him. “No,” she tries to explain, “He’s afraid for you.” 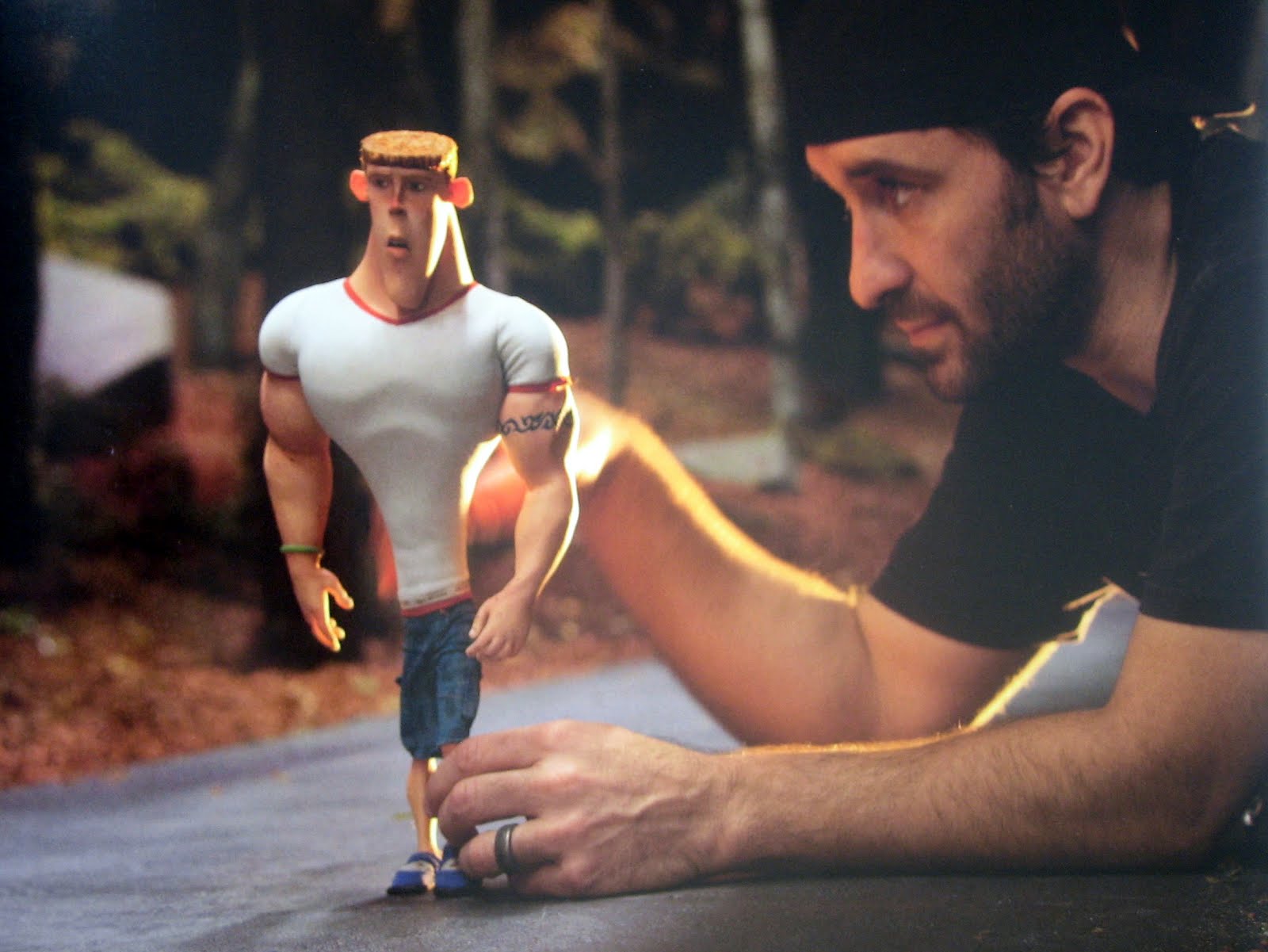 “What I wanted to do with [Norman’s] parents was … they want to do the right thing by him, they just aren’t doing it very well. I think that’s relatable. Every kid knows what it’s like to hear their parents argue.”

To say more than that about the film’s plot would be to reveal too much. ParaNorman is constructed in the manner of a multi-layered mystery, wherein almost every character is concealing (though not always consciously) a secret that makes them radically different from how they’re perceived. That sense of intentional misdirection (misunderstanding, actually) infuses the entire rest of the plot. It’s true enough, for example, that Blithe Hollow is afflicted by a zombie curse unleashed by an executed witch, but the mechanics and the meaning of such things can be deceiving. Who, for example, is really being cursed when it comes to zombies? The film reinforces this theme through a visual design that, while emphasizing realistic textures and lighting, is built to always look slightly askew.

“There are no straight lines in [the film’s] world. I like the fact that even our ‘attractive’ characters are kind of, y’know … kind of ugly, I guess.”

“It’s pointless, in this medium at this level, to be aping Tim Burton. We had to find a different way of doing spooky stop frame [animation]. We’ve seen gothic, we’ve seen kind of that Victorian thing. So we had kind of a code when we came to this: no stripey-socks, no curly-cues, no strange forced perspective. Instead it’s kind of an Amblin movie, some Scooby-Doo in there … “

The film’s real visual knockout punch, though, is the expressiveness of its characters. Traditionally, human figures in stop motion are given facial animation via head replacement, wherein the character’s entire head is swapped out for each lip movement, nose twitch, eye glance, etc. It’s a painstaking process, and one that has always made truly subtle “face acting” incredibly difficult within the medium. But Laika has a secret weapon, in the form of the relatively young technology (really only as old, commercially, as 2003!) of additive manufacturing – also known as 3D printing.

“We used every technique, starting with stop frame then something else if that wouldn’t work. We’re not militant about it … whatever tells the story best.”

In 3D printing, the data for three-dimensional shapes modeled in (or scanned into) a computer are transferred to a machine that fabricates the shape itself exactly into a real, physical object out of whatever material the machine has been built to utilize. It’s an amazing technology, primarily used for the production of custom and/or ultra-precise components for medical and computer technology at this point, but during the production of Coraline the folks at Laika saw in it the potential to revolutionize their medium by allowing a greater variety of heads and faces to be mass-produced on a reasonable scale than ever before.

“The heads are printed out on a color printer. We went for a very ‘painterly’ look for the faces, then you model that and the shape in the computer and it outputs to the machine. We had the 3D printer on Coraline, but it wasn’t in color – someone had to hand paint those freckles onto her face. You have a character like Neil who has thousands of freckles … every face looks perfect.”

The results, to put it plainly, are astonishing. The characters have a range of emotional/expressive response that rivals what we see in the less-restrictive mediums of digital or hand-drawn animation. It’s a vital component of the film’s success, since a huge amount of the slow-burning, character-centric first half is about reading lonely Norman’s face to understand his reactions to the world and the people around him. Best of all, it does so without sacrificing the visibly handmade quality that makes stop motion so arresting.

“The imperfections you see in stop frame, the handmade quality … that’s what computer animation is chasing. To be real, to have the imperfection that reality has, that’s kind of magical.”

We hear so much about how technology is making the movies worse with 3D gimmicks, overreliance on CGI, dehumanizing orange/teal color grading, etc. ParaNorman is a great film, made by great filmmakers, but it’s also a testament to how technology both old and new, in the right hands, can make a story better than it might otherwise have been. Animated romps for family audiences routinely turn out to be forgettable distractions or pointless cash grabs, but this is easily one of the best movies of the year, and establishes Laika as a force to be reckoned with in a field that could use another big player – especially one willing to play such a radically different game.

“Stop motion is not a genre, it’s a medium. You can use that medium to tell any kind of story.”