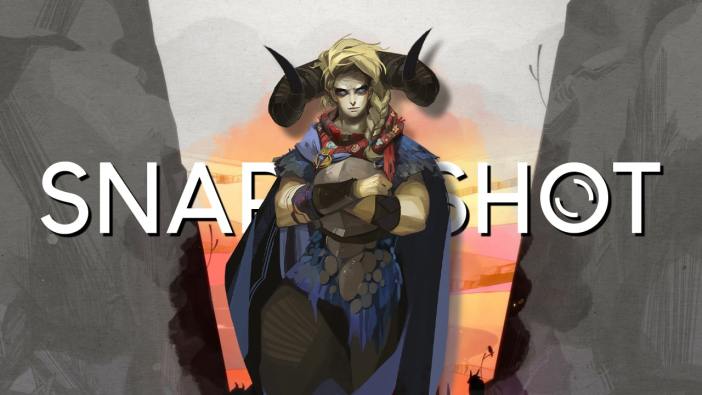 This article contains spoilers for Pyre from Supergiant Games.

The main thing that differentiates video games from all other mediums is a sense of choice. On a mechanical level, you choose to have Mario leap over a Goomba, you choose which play to run in Madden and how to execute on it, and you choose what to point and shoot at in Call of Duty. Sometimes games come along where your narrative choices impact the state of the world and its inhabitants, like choosing to save or destroy Megaton in Fallout 3 or the myriad micro-decisions you make via dialogue in Telltale’s The Wolf Among Us. However, it’s a rare game that is able to weave together the mechanical gameplay choices with the larger, more narrative-driven world choices into a single cohesive system, but that’s exactly what developer Supergiant’s incredible Pyre does on a level I don’t think I’ve seen before or since in video games.

The 2017 follow-up to Bastion and Transistor places you in the role of the Reader, who awakes in a pastel fantasy world known as the Downside. There, you gradually gather a wandering crew of fellow exiles, each of a different race with unique skills and attributes. Together you roam the land via caravan, bonding with one another and occasionally partaking in the Rites. The Rites are a competition that’s a bit like if the commissioner of the NBA were a Dungeons & Dragons Dungeon Master, and the halftime shows consisted of a poetry reading.

Ultimately they are 3v3 competitions where each team’s goal is to gain control of the Celestial Orb and use it to douse the opposing team’s pyre by carrying it into the flames. The catch is that you can only move one character at any given moment, and you’re ostensibly powerless and vulnerable when in control of the Orb, which is where the bulk of the Rites’ strategy and dynamics comes into play.

The first few hours of the game have you growing accustomed to your party characters and their play styles during the Rites. The imposing demon Jodariel is slow and cumbersome, but her powerful slam sends shockwaves to your enemies and dowsing an opponent’s pyre is worth a lot of “points.” On the opposite end is Ti’zo, a small flying imp who can quickly zip back and forth across the battlefield but scores far fewer points per dowsing than some of the larger, slower characters.

You’ll naturally gravitate towards specific characters early on, in turn leveling them up and growing their attributes and abilities. The time spent in-between Rites will also flesh out these characters, their motivations, and how they bond with one another, which will also likely factor into whom you choose as members of your triumvirate in each Rite.

The ultimate goal of each of your compatriots is to participate in the fabled Liberation Rites, where upon winning, one is given the freedom to escape the Downside and freely enter back into the Commonwealth above, the kingdom that everyone down here was at one point exiled from. Between the Rites, the game plays out as a series of choose-your-own-adventure decisions in which you have free time to partake in one of a number of activities.

Do you forage for resources, which will give you items to use in battle? Or meditate, honing your own personal senses? Or maybe you mentor one of your companions, leveling them up and bringing them one step closer to their goal of freedom and salvation? Pyre is full of simple but substantial decisions like these that feed into the story, which feed into the gameplay, which in turn feed back into the story. This progression loop becomes second nature, until the realization of the first Liberation Rite comes along and shatters all of the preconceived notions you had about how the game would unfold. Once you gain the invitation to partake in the first one, you realize that liberation in the world of Pyre means just that: You choose a member of your crew at the start of the Rite, and if you win, that character gains their freedom from the Downside and leaves your party and your adventure for good. On top of this, the character you choose to anoint must be one of your three highest-level characters, and it’s here that gameplay mechanics, narrative decisions, and the player’s ultimate will to win all funnel together into one single, powerful truth: Choice matters.

Whom do you choose to reward with the possibility of liberation and salvation? How do you balance the techniques and abilities you’ve come to rely on with the backstories and motivations you’ve become emotionally invested in? Say you’ve come to utilize Rukey Greentail’s speed and agility as a major component of your strategy within the Rites, leveling him up and branching out his skill tree to its fullest extent. But outside of battle, he’s expressed his intense desires to make it back to the Commonwealth and be reunited with his family. Do you part ways with that incredible ally, knowing that it will make the game more difficult going forward? If Rukey has been a key ally in your wins throughout the game, hasn’t he earned a chance at his freedom?

These decisions become even more difficult to make as the game goes on and you slowly see your ranks decrease as more and more cherished allies earn their salvation. But soon you find out that those who have won their freedom are now part of a plot to overthrow the dictatorship up above and bring true peace to the realm. With each new member you set free, you can see the chances of success slowly grow. Don’t you owe it to every living soul to send your finest, even if it means saying goodbye to your closest party members and making the game you play more challenging as it goes on? The monumental choices you’re confronted with during the Liberation Rites throughout Pyre become even more complex when you factor in that even if you lose a match, the game moves on. There are no fail states, but rather the story adapts to your triumphs as well as your tribulations. For instance, there can come a point in one match where Pamitha, one of your allies who’s a winged member of the Harp race, is forced to fight for Liberation against her own sister Tamitha.

The two share a hostile relationship, which is evident in their conversations throughout the game. But midway during this Rite, you’ll hear the voice of Pamitha speaking directly to you, pleading for you to throw the match and have her sister win, securing her freedom to return to the Commonwealth. This is yet another wrinkle added to the dynamic of these decisions and another factor in Pyre’s incredible sense of choice.

As fewer and fewer members of your party remain, loneliness begins to set in. Rites become more difficult gameplay-wise as you need to adapt to lesser-used characters with lower stats and abilities you’re less familiar with. And every step forward is a step closer to the next Liberation Rite — and the impending knowledge you’re going to have to once again make a difficult decision with genuine consequences. But prior to stepping into the arena for those fateful battles, your character will always look up to the stars for guidance. And it’s there, amidst the night sky that serves as an anchor to your entire journey, that the power and importance of Pyre’s sense of choice is made abundantly clear.