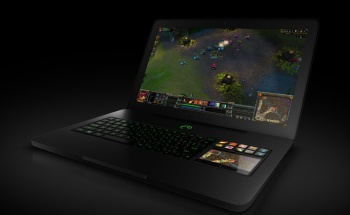 Razer’s proof that PC gaming is not dead has been revealed as the Blade, a super-hot new machine the company describes as “the world’s first true gaming laptop.”

Remember the oddball Razer ad that appeared in the Wall Street Journal a few days ago, promising to remind the world on August 26 that “PC gaming is NOT dead?” Whether or not the world needs that particular wake-up call is a matter of debate but regardless of that, the big day is here and the curtain is now up on Razer’s big secret.

Behold the Razer Blade, a light-weight, super-hot laptop designed to cater to the needs of hardcore PC gamers on the go. Developed in partnership with Intel, this portable bad-boy is built on a Core i7 CPU and an Nvidia GeForce GT 555M video chipset, with 8GB of DDR3 RAM, a 320GB hard drive, 802.11b/g/n wireless capability, built-in webcam and integrated 60Wh battery. It’s topped off with a 17.3″ LED backlit display and packed inside an aluminum chassis that’s only .88 inches thick and has a total weight of less than seven pounds.

A new gaming laptop isn’t going to set the world on fire and it’s a bit of a reach to say this is the world’s first, “true” or not, but there’s no question that this is one hot-looking piece of iron. The battery strikes me as a little on the flabby side but otherwise, you’re probably not going to find an off-the-shelf gaming rig you can take anywhere with bigger stones than this one. But all that firepower carries a commensurate price: when the Razer Blade goes on sale later this year it will cost a whopping $2799.99. Cha-CHING!