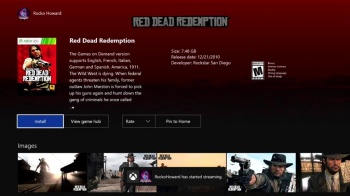 One of the most celebrated titles of last-gen has hit Xbox One’s backwards compatibility list.

Rockstar Game’s award winning 2010 classic: Red Dead Rdemption, will be the latest title to join Xbox One’s backwards compatibility list, NeoGAF has discovered. The game appears to be available to download, but is unsearchable, meaning you have to do a little digging to find the download link.

In the NeoGAF thread, user “rockohoward” suggests searching for his gamertag, where he has posted a download link on his profile. This has been confirmed to work by multiple sources.

At the moment, it looks like the backwards compatibility only works if you have purchased the digital version of Red Dead Redemption on Xbox 360. We are assuming that support for physical copies will come in the future, similarly to all of the other Xbox One backwards compatible titles.

This is obliviously a goof on Microsoft’s part, as several other as-of-yet-unannounced titles have also been made backwards compatible in a similar way, including Left 4 Dead 2, Tekken Tag Tournament 2, and Castlevania: Symphony of the Night.