When you first set foot into Monster Hunter World’s Ancient Forest, you feel like you’ve been transported there. It doesn’t feel like an artificial series of corridors dressed up with foliage and harvesting points and enemies. It feels alive. It feels like it’s a real place where all the component pieces make sense together at a fundamental, biological level. The huge, fantastical monsters feel like they’re specifically designed to fit into this place and like each one has a niche carved out just for them.

These fictional creatures seem so believable because the environment and monster designs utilize the real scientific concept of adaptive evolution to make sure they all fit together logically. It feels real because these are the same natural forces that create the environments and creatures that make up the real world.

In its recent expansion Iceborne, Monster Hunter World added a new frigid environment called Hoarfrost Reach, which is clearly inspired by real environments found in the forests of Alaska, Siberia, and Scandinavia. The new monsters it introduces to the game give us prime examples of how adaptive evolution inspires monster design in Monster Hunter World. Let’s explore what that means and how a science-based approach to design makes Monster Hunter World such an immersive game.

On the Origin of Monsters

Before we talk about Monster Hunter World’s fantastic beasts, let’s talk about a real life monster: the polar bear. Despite being a close relative to the brown bear, the polar bear’s fur appears white as snow, although it is actually transparent. Snow is likely the reason polar bear fur appears white — it helps the animals blend into their snowy surroundings, which makes them more effective hunters. Around 900,000 years ago, a (probably brown) bear had a cub with white fur, and that cub had significant advantages in snowy environments because it was able to more easily hunt for food in the winter.

It went on to have baby white bears, and they had such a survival advantage in snowy white environments that they continued north and diverged further to adapt to the cold. This is adaptive evolution in a nutshell. While it’s difficult to observe adaptive evolution as it happens, we can see evidence for it genetically and the results are often self-evident. 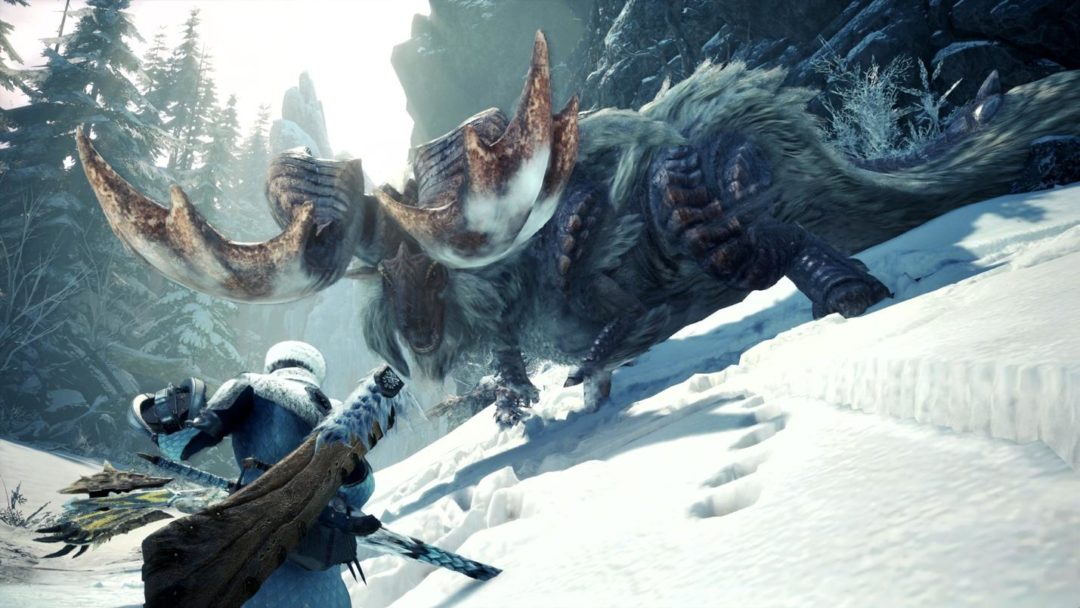 Reindeer Rex and the Flying Smilodon

So now that we’re clear on what adaptive evolution is, let’s talk about how it inspired Monster Hunter World: Iceborne’s monster designs starting with the monster I’ve been affectionately calling reindeer rex: Banbaro.

Banbaro’s most striking feature is its enormous horns. They conjure images of the antlers used by male moose for fighting. But while a moose’s antlers are set back on its head, Banbaro’s protrude forward, which enables it to use them for clearing the ground and picking up trees to use as weapons. Reindeer also use their antlers to clear the ground after heavy snow so they can forage for food in the winter.

With the large amount of snow in Hoarfrost Reach, there’s little doubt that Banbaro uses its horns for the same purpose — clearing away snow and fallen trees to find food underneath. The horns, along with its shaggy white fur and thick skin, are part of how Banbaro evolved to adapt to its snowbound environment.

Now take the fanged white wyvern Barioth, a series favorite returning in Iceborne. Barioth debuted in Monster Hunter Tri and has been a denizen of icy locales in every game since. Barioth is considered the apex predator of Hoarfrost Reach. It’s covered in white fur like a polar bear, but Barioth’s most striking physical feature is its enormous fangs, which immediately conjure images of the extinct saber-toothed cat Smilodon. It’s thought that Smilodon evolved those huge fangs so that it could prey upon huge herbivores like mammoths and giant sloths, using its fangs to hold on while they struggled to escape. 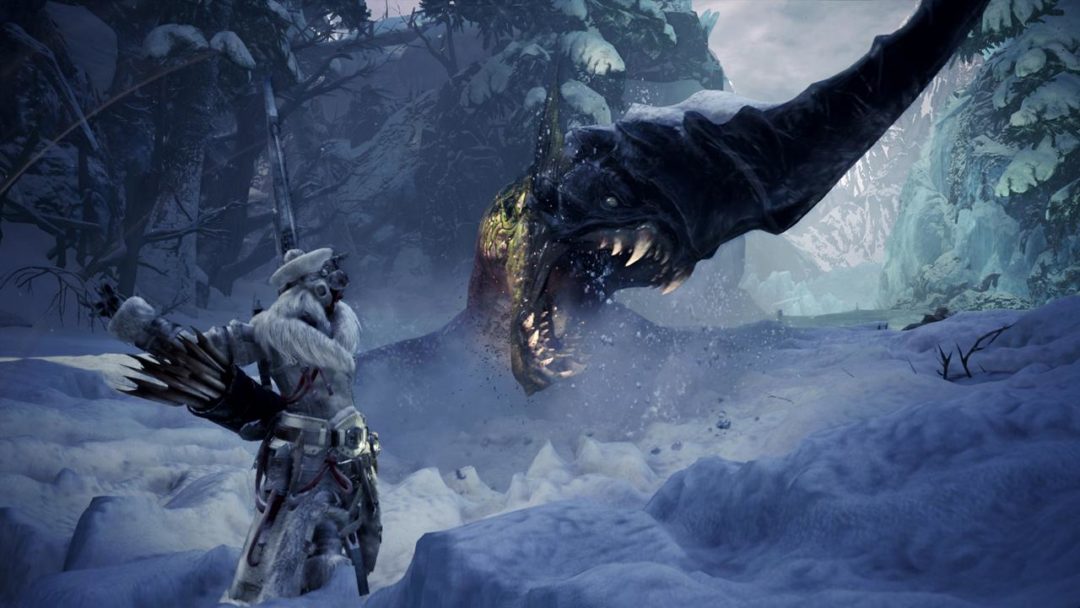 Barioth can be observed attacking Banbaro and other large monsters in Hoarfrost Reach in a similar manner. In this case, the evolution of Barioth’s fangs is likely due to the large size and hearty nature of its prey rather than the environment. This brings us to another major driver of adaptive evolution: carving out a niche. Basically, a species will evolve to live on a particular food source. With fangs like those, Barioth has a prime niche at the top of the Hoarfrost food chain.

While Banbaro and Barioth’s designs were clearly inspired by real-life animals, Iceborne’s new monster Beotodus is a completely novel design. Beotodus is a piscine wyvern, Monster Hunter’s fancy name for “fish monster,” but it also lives in Hoarfrost Reach. More specifically, it lives under Hoarfrost Reach — beneath the snow and frozen soil. Beotodus shares a family with other piscine wyverns from Monster Hunter World like Jyuratodus and Lavasioth.

All of them have fins and big fishy tails used for swimming (through mud for Jyuratodus and lava for Lavasioth). While both of its relatives swim through semi-liquids, Beotodus swims through frozen soil.

In order to survive in Hoarfrost Reach, Beotodus must be adapted to swimming through semi-solid frozen soil. It uses the massive horn on its head to cut through the soil and ice. It would be impossible for a monster like Beotodus to exist in Hoarfrost Reach without this horn or some other way of adapting to a deep freeze. Knowing what we do about adaptive evolution, we can easily imagine a history of the Beotodus species: An ancestral piscine wyvern was born with a horn that helped it move through soil and opened up a whole new niche for it to differentiate towards.

In addition to brand new monsters, Monster Hunter World: Iceborne includes another approach to expanding its repertoire of monsters without requiring full redesigns via the inclusion of subspecies. Subspecies are a very real biological phenomenon that are the subject of healthy debate but essentially represent the very first baby step towards evolution from one species into another. In the real world, subspecies are groups of a species who are isolated from each other and have developed morphological differences but are still genetically capable of successful mating.

Monster Hunter has historically used subspecies as a way of placing older monsters in new environments with new abilities and features. There are multiple subspecies in Iceborne, and there was clearly significant thought put into not just how to make them fun and new, but also why they would have changed the way they have after becoming isolated in a new environment. 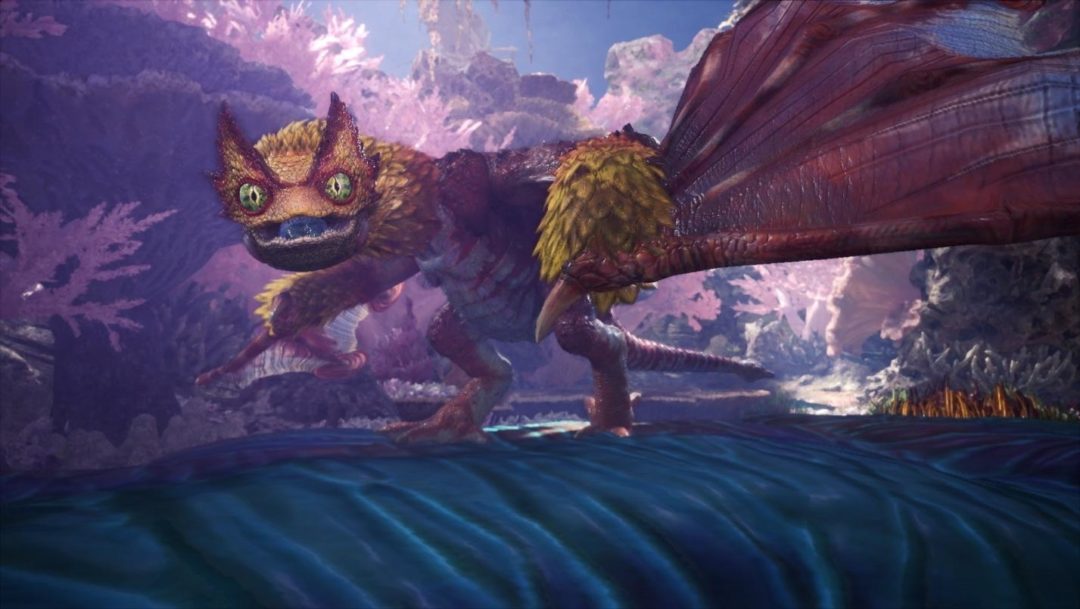 Take the Coral Pukei-Pukei, for example. In Monster Hunter World, Pukei-Pukei was a resident of the Ancient Forest. It had green coloration to help it blend in with the trees, and the poisonous fruit it ate gave it the ability to spit toxic fluid or blast a giant toxic cloud out of its tail as a defense mechanism.

Coral Pukei-Pukei is a subspecies living in the Coral Highlands, an area of pink-orange- and blue-hued heights covered in giant coral. The Coral Pukei-Pukei’s coloring has changed from green to pink-and-yellow to blend in better with the coral, and rather than eating poisonous fruit, it gulps large amounts of water from the surrounding vegetation and uses its tail like a fire hose to defend itself.

This is an elegant way of applying the logic of biology to monster design. What would Pukei-Pukei look like if they were isolated in the Coral Highlands? How would they change to adapt to such a different environment? What would they eat? And how would they defend themselves from a different set of predators? Monster Hunter is able to make a fantastical world so immersive by answering these questions with scientific reasoning.

These examples show how the monster designs of Monster Hunter World take the environment into account (and vice versa) so that everything fits together in a believable way. The monsters aren’t created in a vacuum and dropped into environments haphazardly. They aren’t just cool designs put against a fancy window-dressing. The monster designs are believable because they are inspired by the real scientific concept of adaptive evolution.

What would it look like if a game didn’t take adaptive evolution into account in its creature designs? We need look no further than the wonderful procedurally generated creatures of No Man’s Sky. These creatures are made from a set of rules and premade parts, and the environments they exist in have almost no effect on their design. Rather than appearing believable, No Man’s Sky’s creatures are supposed to be a jumble — like a tiny stegosaurus with a long neck and a bird’s head living on a desert planet covered in giant mushrooms. 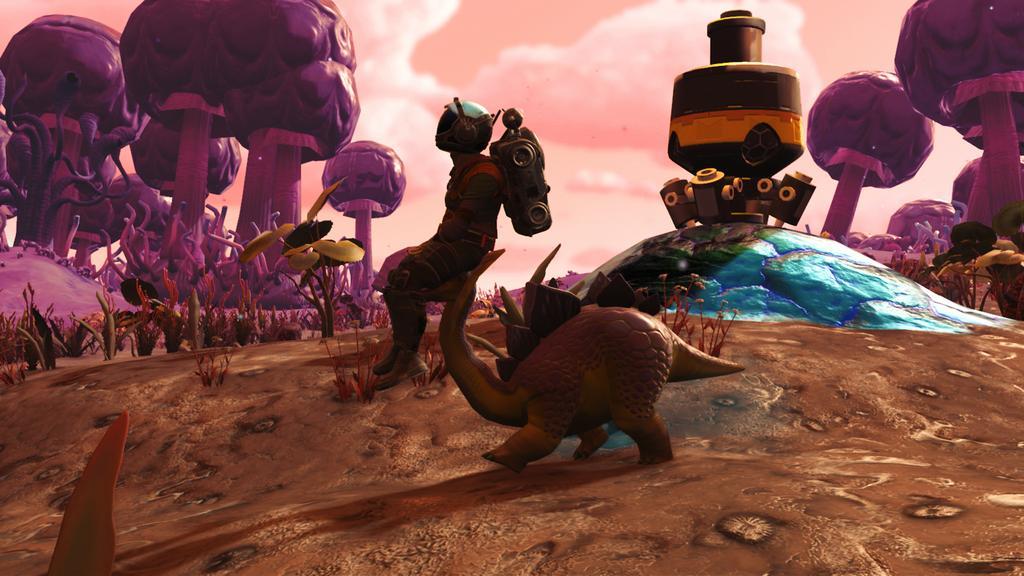 It can be fun, but it certainly doesn’t make any biological sense. This is totally fine in a game focused on exploring procedurally generated worlds, but in a game like Monster Hunter World, where immersion is such a key factor, biological considerations are very important.

The emphasis on hunting in Monster Hunter requires learning about your prey and their territory, and the game’s complexity and realism make it compelling and challenging. Biological complexity is something we all fundamentally understand, but implementing it into creative designs takes careful consideration. Knowing the scientific basis for these designs increases our appreciation for them and expands our ability to discuss them.

After all, as a geneticist, I can’t think of a better way to impress people at a party than discussing the scientific accuracy of the monsters in Monster Hunter World.