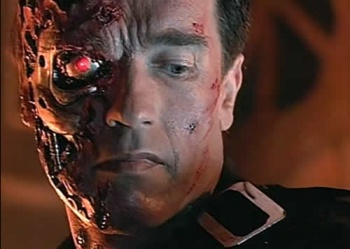 The rights to the iconic series return to James Cameron in 2019, who is reportedly planning a reboot.

Deadline is reporting that iconic franchise Terminator is getting a reboot, with original director James Cameron to oversee production, and Deadpool director Tim Miller to direct.

Apparently, the rights to the franchise return to Cameron in 2019 – a full 34 years after the release of the original movie. Sources say that Cameron and Miller are in talks to produce a movie that finally, definitely, puts an end to the war between humans and machines.

Back in 1984, rookie director Cameron – who only had Piranha 2 under his belt as director – sold rights to Terminator for just $1 to producer Gale Anne Hurd, with the stipulation he could not be fired as director.

Cameron went on to write and direct Terminator 2 but after that largely washed his hands of the series. The exception was on the last picture, 2015’s Terminator Genisys. Perhaps because his old friend Schwarzenegger had returned as the title character, Cameron was generous in his assessment, reportedly saying that the Alan Taylor-directed film had reinvigorated and created a renaissance for the franchise.

At this point we don’t know if Cameron’s new movie will be a full reboot, starting everything over from scratch, or simply another installment in the franchise.