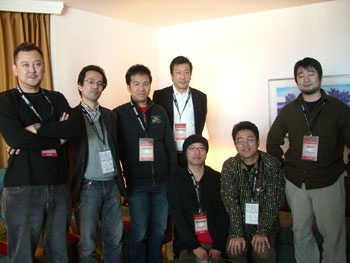 I was thinking about it the other day and FFXI Fan Festival is really the only game-specific convention I’ve attended. I’ve never been to Blizzcon, for example, so I’m not sure how to compare FFXI fans to WoW fans, except to say that since FFXI has such a learning curve that sticking with it and coming to the convention is maybe more hardcore. (Cue WoWer wrath-pun intended–here.) This year was my second, the festival’s third, and while it was a little smaller than last year’s event (at least it terms of length and activities), it was a still a lot of fun.

Instead of Anaheim again like ’07, we were at the Renaissance Hotel in Hollywood. Friday night kicked off with an open bar reception at Twist so attendees could become acquainted before the big day of announcements, exclusive play time, and contests.

My Saturday morning actually began before the opening ceremonies, since they snuck us into the game demos before everyone else. Two new modes are being added to the game: Moblin Maze Mongers and The Swarm. The first was hinted at as a possibility during last years’ fan festival: a way for players to create their own dungeons. By using the tabula item, any monster runes you have can be packed like Tetris pieces into a room voucher grid. Once you get the arrangement settled, there is a store front in the Chocobo stable where you can order the maze to be built. Inside the dungeon lobby you confirm your design and even change the background music before heading in to do battle. Most of the time this will probably be a group task, but since the monsters inside scale to the creator’s level, you could theoretically construct one that would be possible to solo.

The Swarm, on the other hand, is definitely designed as a group activity. Players gather in a cave for a five minute bug killing spree-the ideal lunch break encounter. It’s best to gather in the center of the cavern, because they sort of drop down from the ceiling there and skitter away to the edges where they disappear-you have to be quick. At the end of the five minutes, the group is awarded points based on performance, but so is each individual player, providing some healthy competition.

At ten, producer Hiromichi Tanaka was introduced to kick off the event proper with an announcement that had already been given in Japan a couple weeks earlier, about three new downloadable mini-expansions: A Shantotto Ascension, A Moogle Kupo d’Etat, and A Crystalline Prophecy. He described these mainly plot additions to be vertical, as opposed to changes like new classes and mechanics that they consider lateral. Each will take about a month or two to complete and are available from around level 30, although you’ll need a capped (75) party to finish them. The rewards will reflect this difficulty, satisfying endgame players’ desires for awesome loot. A separate team is developing these so that the Wings of the Goddess patches can continue on schedule.

After Tanaka’s morning address, Yoji Fujito gave a technical difficulty-plagued walkthrough of the Moblin Maze Monger game everyone would get to play. Bobby, the demo player, was having some trouble getting the custom maze to load, so the middle of the presentation was given over a back-up PowerPoint backdrop. They did eventually get back in-game, though, only to be slaughtered by a plantoid. Win some, lose some.

The middle of the day was reserved for lunch, mingling, shopping at the Square Enix merchandise store, voting on the art contest submissions, and of course, lining up for demos. At first I wasn’t seeing as many cosplayers last year, but slowly through the afternoon more people seemed to change in their costumes.

Part of this downtime I spent in a round table interview talking with Hiromichi Tanaka, battle director Akihiko Matsui, global online producer Sage Sundi, director of the Wings of the Goddess and Treasures of Aht Urhgan expansions Kouichi Ogawa, and planners Mizuki Ito, Yoji Fujito, and Mitsutoshi Gondai (pictured l to r: Sundi, Fujito, Ogawa, Tanaka, Gondai, Matsui, Ito). The questions they fielded ran the gamut from inquiries about possible graphical overhauls of older content (no) to the possibility of expanding inventory space (maybe) to where the promised summoner avatars are (soon!). There were also some good suggestions made by press players-such as an all-in-one elemental staff for mages that could be quested after to replace the umpteen million separate single-element staves once you collect them all.

Once again the “next-gen MMO” that Square Enix is working on was hinted at, but there wasn’t really any information they could give us. Maybe next year? The FFXI Fan Festival would be a great venue to drop a huge story, because it may not be expected, and it’d also be a really cool way to reward all the players who have been faithfully following FFXI. 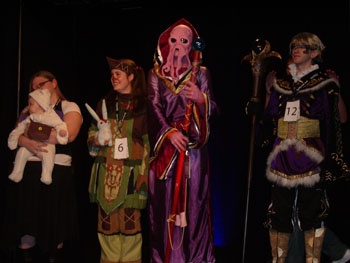 At 3:30 we reconvened in the main hall for a developers panel where they announced what’s coming up as far as near future updates, including some measures to make leveling up go more smoothly for newbies and some new climactic plot content for the Wings of the Goddess arc. Sage Sundi gave a detailed update on the Special Task Force’s progress-the wing of the operation that bans gold sellers and hackers-and they’ve been doing really well. I was just amazed at how interesting he managed to make the presentation. I’m not sure the fans were really prepared to listen to this speech (even though they no doubt appreciate the team’s efforts) but after the lonnnnnng Star Wars intro parody movie displaying only a tiny fraction of the banned account names, and the repetition of formulas designed to cause “lifelong regret” for exploiters, everyone was interested and enthused about the progress being made.

Eventually the dev panel turned to play questions, and perhaps unsurprisingly, many of them overlapped with media questions from earlier in the day. Everyone is concerned about inventory space and avatars for summoners, it seems. It sounds like they are going to do their best to work on both issues, along with all the other tasks they have going on.

Next up came the costume contest–always my favorite part-the art contests, and raffles. This year there were fourteen cosplayers. From there the judges (members of the dev team) chose ten to be finalists, which seemed almost a little unnecessary. Then they had an actual tool to measure audience applause as we all screamed and clapped for our favorites. I think we should’ve gone with the summoner girl, but the fellow that ended up with first place did have great anime hair. Actually, I was surprised the Soulflayer didn’t rank higher, with his really convincing Cthulu-like tentacle face.

The crafting and drawing contests were even more interesting than last year. The second prize craft was actually a bento lunch. The girl sent them a picture of what it would end up being and then prepared it freshly the morning of. Someone did a mod of My Little Pony, morphing them into a dark, horned creature–My Little Ixion, but the project didn’t place. Some Chocobos stole the show, as you might expect. Statuettes with chocobos are sort of irresistible, it seems. The drawing that won, Epic, is the one I assumed would win. High contrast, lots of detail, and dynamic composition! I was eyeballing it right from the start.

Before the raffles they gave some signed copies of the Wings of the Goddess soundtrack to people who came from the farthest (Australia-he got up, said, “G’day,” and I think we all just about died) and nearest (3.3 miles), and for some other incidental reasons. The raffle itself had similar prizes as the other contests (speaker system, custom PC) but ended with a high-end laptop.

It was almost time to head out, but the last event was a piano concert by Kumi Tanioka, one of the composers on FFXI and a member of The Star Onions, who seem to always wish they could come to the states, but never quite make it. I really hope they do sometime, because their remixes of the soundtrack are really fun to listen to. Of course, Tanioka’s piano arrangements are awesome, and she is always so obviously overjoyed to be playing for you that you can’t help but have a great time yourself.

Overall the show had somewhere around 550 attendees (the tickets were sold out) and although it was two days last year, one day seemed to work out fine this time. It may help that the schedule was somewhat compressed, e.g. no Taru Taru marathon, and the “live quest” where attendees quested around the convention by interacting with staffer “NPCs” seems to have collapsed into a section at the end of the program featuring FFXI themed logic puzzles for “exp,” but I didn’t feel like we were lacking things to do. Part of the fun of these events is always just meeting your fellow players in the real world, anyhow, and FFXI has a really upbeat community. Hopefully by next year my monk will have reached a little bit higher level…

Is This the End for EGM?