Dinosaurs fascinate us because they’re real-life monsters. Massive reptiles with long horns and rows of hooked teeth, they resemble creatures of myth. The fact that they were real is difficult for us to conceive. It’s unlikely you’ve heard them described as such, but dinosaurs were animals. While it’s true they were enormous, and in many cases ferocious, they engaged in natural animal behaviors just like modern day lions and elephants. Media likes to portray dinosaurs as movie monsters like Godzilla or the Predator. They’re shown smashing up buildings and pursuing humans across great distances like Mesozoic revenge-seekers. According to movies and games, they’re hunter-killers that long for human meat, completely defined by eating – which is neither fair nor wholly accurate. While there’s nothing wrong with portraying the vaunted thunder lizards as fierce predators, by emphasizing their brutality and playing up their frightening aspects for the sake of horror, we close ourselves off to many of the lessons dinosaurs can teach us about the natural world.

Dr. Thomas R. Holtz, Jr., a senior lecturer at the University of Maryland’s Department of Geology and an expert on tyrannosaurids, points out that this skewed portrait isn’t new: “A lot of 19th and early 20th Century images of dinosaurs are just fighting and feeding. Part of it is because of people perceiving dinosaurs as ‘dragons who were real.’ They see the ‘monstrous’ anatomy, and assume they are monsters.” Their unfair reputation, he says, is comparable to sharks – an animal the public perceives as nothing more than a killing machine.

According to Carl Mehling, the Fossil Collections Manager at the American Museum of Natural History, the misunderstanding stems from projection. Mehling sees our vision of dinosaurs not only as tied to our images of dragons, but as symbols of human nature. “We clothe them in our fears, angers, joys … our expectations, and thus they represent not only our current mode of thinking, but ourselves. Sad as it may be to me, most people aren’t as interested in the day to day of animals. But they (we?) find the war, killing, power, etc. incredibly magnetic.”

Both Dr. Holtz and Mr. Mehling have a point – from Ray Harryhausen stop-motion to the CGI wonders of Jurassic Park, our images of dinosaurs aren’t defined by how they lived, but how they killed. This is especially true in games. Dinosaurs are visually striking and come in a variety of different shapes and sizes, making them easy for designers to adapt into enemies. As a result, in games like Turok: Dinosaur Hunter and its successors we fight off swarms of raptors. Lara Croft pirouettes around an enraged T. rex. In the ludicrous but fun dinos-vs.-soldiers multiplayer of Primal Carnage , several species of dinosaurs work together as a unit to attack teams of humans. While real raptors were sophisticated pack hunters, videogame raptors run straight at the player like a Soviet human wave attack. Carnivorous dinosaurs are always stalking or savaging something, we rarely see them living their lives, raising offspring, scavenging, struggling for territory or mating. In the rare instance that we do see a herbivore, they’re usually there for set dressing. Meat-eaters are the stars of the game industry.

Our visual image of dinosaurs is out of date as well, mired in the early 1990s. For that you can thank a single film: Jurassic Park. Spielberg’s adaptation of the Michael Crichton novel was notable both for its attention to scientific detail – the attention paid to dinosaurs as bird ancestors for example – as well as its propensity to invent details out of whole cloth. Believing that the roughly peacock-sized Velociraptor was too small to be frightening, Spielberg beefed them up to six feet tall and redesigned their snout, forelimbs, and tail to be more like the Deinonychus, which still only stood just above waist height (the man-sized Utahraptor was discovered and described during filming). In contrast, Spielberg and Crichton shrunk the Dilophosaurus from 20 feet long to down to 5 feet, then added a neck frill and the ability to spit poison, neither of which have any basis in the fossil record. While none of these sins are particularly egregious by Hollywood standards, Jurassic Park‘s vision of dinosaurs became so iconic that it still defines the look and behavior of the animals in our popular imagination. (Spielberg’s Saving Private Ryan did much the same for war films, as we’ve discussed previously.)

Most videogame depictions of Dilophosaurus still retain the erroneous neck frill and smaller size – see the Jurassic Park games and Jurassic: The Hunted – and others like Primal Carnage still retain the ability to spit venom. The raptor is even more problematic. While many games such as 2008’s Turok have finally come to call the public’s familiar vision of a raptor a Utahraptor or Deinonychus rather than a Velociraptor, there’s still a mental block against showing them covered with feathers – a discovery that scientists confirmed in 1995. “Feathered animals have never been as successfully scary as scaly animals, at least in western cultures,” explains Mehling. “Feathering them not only lessens their dragon status but links them to living animals we rarely find terrifying.” He does point out, however, that Jurassic Park III incorporated crests on the heads of male raptors as a nod to the discovery – a look that Turok copied in 2008. It’s inaccurate, says Mehling, but may be good business. “If the public thinks dinosaurs are the way they’ve been shown and they appear to love this, why would a videogame company do anything to change that? It would cost them money to find out how dinosaurs really were, and very likely disappoint their target audience.” 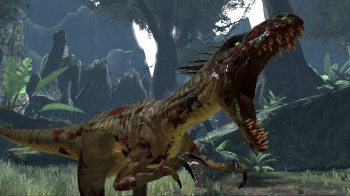 According to Dr. Holtz, we have the venerable T. rex wrong too. Due to budget constraints, Tyrannosaurs in films and games usually only have one to two offspring, but in reality they would’ve had a dozen at a time. T. rex also kept its mouth closed most of the time – a detail that would ruin its movie monster appearance – and didn’t roar that often, since making loud noises would’ve made it impossible to sneak up on prey. Then there’s the real mind-bender: “The biggie, though, is the possibility that T. rex was feathered! New discoveries of more primitive feathered tyrannosauroids, including one ton Yutyrannus, strongly suggests that Tyrannosaurus itself had at least some feathers.”

If that revelation just completely upended your childhood, I know how you feel. Anyone who reads this column regularly will know that I have an almost fetishistic love for historical accuracy and detail, but I admit that my mind recoils from the thought of a Tyrannosaurs Rex covered in downy fluff. This then, is the mental fault line where evolving science meets popular perception. Even as a lover of accuracy, the fact that my beloved T. rex didn’t look how I imagined it – or saw it onscreen, in books, in the models I built, and the toys I played with as a child – sends me into fits of unscientific rationalization. What if the feathers were only found on smaller tyrannosaurids? I think. Maybe they lost them as they got older? Please? Public perception, shaped by years of media conditioning, is a difficult thing to sway. To some extent dinosaurs will always exist in the shadowy valley of our collective imaginations, dwelling somewhere between the movie theater and the museum.

Gradually, the game industry is beginning to come around to showing dinosaurs, and other animals for that matter, as something more than vicious man-eaters. Last year’s indie hit Tokyo Jungle followed animals such as Pomeranians, deer, cats, and lions as they try to eke out a living in a post-human landscape. Both Deinonychus and Dilophosaurus appear as playable animal types in the later stages, and Pterodactyls appear as enemies. Not only does the Dilophosaurus appear sans frill and toxic sputum, but with no humans in sight something becomes increasingly apparent: Apart from being larger and tougher, playing as dinosaurs is really no different than playing as a lion or hyena. You still have to find food, avoid predators, mark territory, find a mate, and try to pass on your genes to your offspring. In other words, removing humans from the game let dinosaurs exist in a more or less natural state – as animals trying to survive in an ecological system. When they kill, it’s not out of malice but out of biological necessity. If prey eludes them, they don’t go crashing through buildings to go after it, they just find slower prey. Playing as dinosaurs teaches a fundamentally different lesson than playing against dinosaurs.

Other games have made small, subtle changes, too: The Dilophosaurs in Turok and Dino D-Day steered clear of the Jurassic Park influence. And for all its dinosaurs-vs.-humans multiplayer silliness, Primal Carnage included a feathered raptor skin as a pre-order bonus. Far Cry 3 players, including some in the gaming press, are currently lobbying to get dinosaurs included in future DLC. That means we could someday see Tyrannosaurus Rex roaming Rook Island, exhibiting the same behavior as the tigers and leopards that simply hunt wild prey until they’re disturbed by inquisitive players or blundering pirate patrols. Finally, two weeks ago Universal confirmed a summer 2014 release date for Jurassic Park IV, meaning we could see the most prolific dinosaur myth-makers retool and revamp their creature designs.

This is exciting, since there are lessons we can learn from dinosaurs and paleontology that aren’t communicated by treating these biological creatures as movie monsters. Mehling would like to see media pay closer attention to how paleontologists discuss the fossil record: “We use qualifiers liberally. When we say ‘probably,’ ‘possibly,’ ‘maybe’ we definitely mean it. When we say ‘oldest known’ we do not mean ‘first,’ which may be subtle but is a very important distinction. I’d love to see dinosaurs portrayed as animals that didn’t only kill or get killed. And I’d love for paleontologists to be allowed to say what they say instead of being led or coaxed into the pre-written storyline, or worse, misquoted or taken out of context.” Dr. Holtz agrees that he’d like to see more about the peculiarities of dinosaurian life histories – their large litters of young, for example, and their short lifespan. T. rex, he says, doesn’t seem to have lived past 30. But the biggest missing piece is evolution. “Most TV shows on dinosaurs look at an individual species, or a community, but not at tracing the evolutionary history of a lineage and its diversification over time.” Perhaps some future game could be Tokyo Jungle by way of Spore, challenging players take on the role of a small Triassic dinosaur and gradually level them up the evolutionary ladder into a hulking (mink-coated) T. rex.

And, of course, there’s the other lesson. Dinosaurs lived through one of the greatest mass extinction events in planetary history, either dying out or evolving to meet the new challenges that climate change and ecological meltdown forced upon them. Since Earth is currently experiencing another mass extinction event, and facing the possibility of environmental change, perhaps we should look at dinosaurs not as our enemies, but as both an example and a dire warning.

Robert Rath is a freelance writer, novelist, and researcher based in Austin, Texas. You can follow his exploits at RobWritesPulp.com (robwritespulp.com) or on Twitter at @RobWritesPulp.