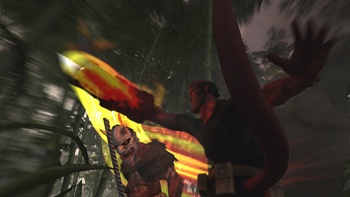 When you hear that Mike Mignola and Guillermo del Toro were involved in making a videogame, both as writers and “consultants,” it’s hard not to expect good things from their hard work. So, when Hellboy: The Science of Evil was released, I was really hoping that it would finally wash away the foul taste that’s been sitting in my mouth ever since I played Hellboy: Asylum Seeker. Granted, it doesn’t take much to surpass that level of awfulness, but the latest videogame based on everyone’s favorite paranormal investigator still falls short in terms of quality.

Thankfully, Hellboy: The Science of Evil features an original story that will keep fans of the comic entertained without spoiling the plot of the upcoming movie. If a player is willing to suffer through the repetitive gameplay, they’ll be treated to a plot about how the Bureau for Paranormal Research and Defense (BPRD) is investigating a series of occult thefts that, incidentally, have ties to previous cases that players will experience as flashbacks. As stories go, it’s not a bad one, but it takes a while for things to actually make sense and get rolling.

Hellboy has some mighty impressive powers at his disposal. As a member of the infernal aristocracy, he’s super-strong, has a hellfire trail on each of his attacks, can activate a demonic rage for about five seconds, and can fire an absurdly-oversized gun with different types of ammo. Oh, and he can punch through walls and doors to find ammunition and spirit energy. Sometimes. Of course, being super-strong apparently doesn’t count for squat these days, as every enemy in The Science of Evil takes about twenty hits too many to kill.

Each level is divided into small sections blocked off by “spirit gates” that only disappear after all the identical-looking enemies in the area have been defeated. That’s fine, but it’s annoying when combat is the button-mashing fest it is here. Annoyance changes to frustration when opponents get stuck behind objects or buildings that Hellboy himself can’t get to. When this happens, it’s just quicker to restart the console and pray that the enemy AI isn’t stupid enough to repeat the mistake. All this repetition seems to be making up for a lack of content; but, hey, maybe the developers at Krome haven’t realized gamers usually prefer quality over quantity.

Multiplayer for The Science of Evil isn’t any better – even at best, it feels insulting. This is the only portion of the game where Liz Sherman and Abe Sapian are playable. Their range of moves are as limited as Hellboy’s, but Abe does have some speed moves and Liz’s can pull off pyrokinesis. What’s insulting is that the multiplayer portion of the game is simply a co-op version of the single-player campaign, which means that you’ll see the exact same story and cutscenes, neither of which actually acknowledge these extra characters’ presence. Why aren’tAbe and Liz available for the main campaign? Their availability could certainly increase the replay value of the game, or at least make you actually want to play for longer than an hour, provided they somehow added to the story. 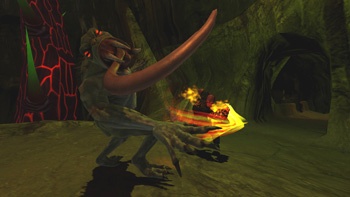 Making a game that mirrors Mignola’s art style is a difficult task, so the developers didn’t even try. The game doesn’t look bad, but there’s nothing memorable about it, either, and when the action heats up, frame rates will drop well below 30 FPS during hectic fights. Underground/enclosed areas are always darkened to the point of being pitch black, making running into walls and getting stuck one of Hellboy’s infernal powers. The game’s fixed-perspective camera, mercifully, is serviceable, but it occasionally tries for artistic angles that become maddening when you’re trying to, say, cross a narrow bridge without stumbling over the edge or finding a pathway that isn’t shown from the current perspective.

The best thing about this game is how it sounds, and even that positive is muffled by an overwhelming lack of impressiveness. The music, while wonderful at establishing an initial mood, quickly loses its impact when the loop cycles every three to five minutes during level progression. The voice acting is actually quite good thanks to the participation of the films’ stars.. Naturally, Ron Perlman delivers his lines beautifully, but most of the dialogue is pretty brief, and neither Selma Blair nor Doug Jones can be heard outside of the multiplayer mode.

I wanted to like Science of Evil since it delivers a decent original story, but I never found myself actually enjoying it. The Science of Evil’s biggest sin, though, isn’t the fact that’s it’s repetitive, that it’s shallow, or that it’s stupefyingly easy. No, its biggest violation is that it manages to take the talent of Mignola, Del Toro, and Perlman, and turn that combination into something dull and broken.

Bottom Line: Based on the talent involved, this should have been something much better. As it is, though, it’s just another crappy tie-in game that isn’t worth your time; sadly, it’s still the best Hellboy game out there.

Recommendation: Do something awful to it: This isn’t worth your time, even if you’re a huge Hellboy fan. Use it to build a fire and then read one of the comics by the light provided.

Aaron Stack isn’t really here. He’s just a product of your imagination, telling you what you should already know.