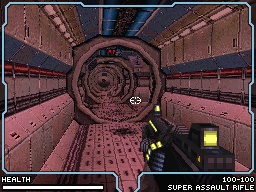 Cinematic games are not usually the domain of the DS. Its widescreen competitor, the PSP, is the obvious choice for such endeavors, with its brilliant display and superior horsepower. Occasionally, though, developers will try for something more on the DS. Renegade Kid has done that twice now, first with Dementium: The Ward, and again this year with Moon. But in their effort to create something wholly new and separate from the typical DS fare, Renegade Kid have in fact recreated a bit of the past. Moon is a game thoroughly rooted in the mid-’90s, so much so that it can be fairly called a Doom clone. And while that’s something of an indictment, Moon is still an interesting game that deserves players’ attention.

The overwhelming feeling Moon conveys is one of isolation. You arrive on the satellite’s surface as part of a team of astronauts investigating the deaths of a group of lunar archaeologists that was itself investigating a mysterious subterranean structure. This structure – and the game’s aesthetic in general – predates the digital era. Moon wants to be the hard-sci-fi answer to the more fantastical and colorful Metroid. The space suits are large and cumbersome and the environments evocative, with their alternately brilliant and clinical color schemes. For lack of a better description, the art design really channels the Disney film The Black Hole. The music is similarly atmospheric: During the best pieces, tinny sounds and radio crackles combine to create an ambient mood of menace. Throughout the game, the environments beg the question: What the hell happened here?

Not much, it would seem. Moon’s fatal flaw is that it divides itself between the action-adventure and FPS genres – and neither genre gets the full attention it deserves. A small number of robot enemies, all of whom look the same and require roughly the same strategies to defeat, sparsely populate the environments, Dispatching them still provides some fun, since the game uses the proven stylus, D-pad and shoulder button set up that worked so well in Metroid Prime: Hunters. The adventuring is confined to some intermittent puzzles you solve with a remote-controlled moon car. But Moon mostly involves a lot of walking between empty rooms and corridors. Imagine Doom with fewer and less varied enemies and a remote control moon car, and you’ve got a fairly good approximation of Moon‘s gameplay.

As I sped through Moon at 60 fps, I wondered what its beautiful environments would have been like if they were filled interesting enemies. I also wondered how much more interesting the game might have been with a jumping mechanic. The difficult thing about playing Moon is that it’s a throwback to a time when the FPS was only just learning to walk. The 2-D platformer and 16-bit RPG were at their peaks, and it’s enjoyable to play something so refined. Moon, like so many of the FPSs in the mid-’90s(I’m looking at you Kileak: The DNA Imperative) feels like a harbinger of better things, even as it waddles through its own primordial ooze. Moon will take you back to a certain time and place – not necessarily a warm place filled with bloom lighting, but to a jaggier, rougher moment in gaming history.

Bottome Line: Moon is a boring FPS, but it has an interesting visual design and plays competently enough to provide a few hours of entertainment. It also has a superb soundtrack.

Tom Endo is a section editor at The Escapist and has Gouraud-shaded wallpaper in his bedroom.