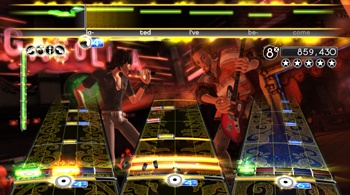 As far as Harmonix is concerned, a sequel to the original Rock Band was most likely not in the cards from the very start. The developer that brought us Guitar Hero and Frequency shot for the moon in its first attempt at a four-player, full band experience and while it was successful both critically and financially (more than 3.5 million Rock Band bundles have been sold to date), Harmonix’s ambition burned up somewhere in the atmosphere with plenty of features not making the final journey to stores. Rock Band 2 picks up where Harmonix left off only stronger, harder and better than ever and not a moment too soon. The wealthy, yet creatively, bankrupt husk it left behind is tuning up its own four-player band for what will surely be the ultimate battle of the tiny, plastic instruments. For the kings of rhythm gaming, is this sequel enough to satiate those who have surrendered their bank accounts in the name of downloadable content while being inviting enough for those on the fence between these near $200 dollar sequels? Hell, yes, it is.

From the very start, Rock Band 2 completely revolutionizes the way rhythm games function with two obvious, but until now, untapped features. Prior to RB2’s release, Harmonix updated the original Rock Band with a patch that, for a small fee, allows for users to copy all but three songs (blame the gods of licensing) directly from the disc to their hard drive for use with the sequel. Along with the downloadable content that players have snatched up in the past year, your Rock Band 2 library will contain at least 140 songs from day one without ever having to swap a disc. It sets the precedent that from now on, backwards compatibility is the norm and for consoles with hard drives, there is no excuse not to comply. The second breakthrough feature for Rock Band 2 is a part of the guitar controller itself: a microphone and light sensor to automatically calibrate your HD television for latency. Seeing as how calibrating the system manually still relies on your rhythmic abilities – and is therefore prone to human error – this new method is a godsend.

So if Harmonix has already crafted some sort of music gaming messiah before you even place the disc inside your system, what happens when you actually turn it on? If you’re not paying very close attention, it may not appear like much has changed as everything operates just about the same as the original title, but there are a few key differences. The Band World Tour mode from the original Rock Band is now the main method of progression and can be played both off and online this time around, with your bandmates coming and going as they please. The two major differences between touring the world then and now is that Harmonix has done away with the concept of bandleaders, so now that specific character doesn’t have to be present. Also, the characters you create are no longer tied to an instrument, meaning your death metal drummer can also become a snarling vocalist or guitar legend anytime you please without fiddling with any options. In short, Band World Tour is as free and painless as it should have been all along. 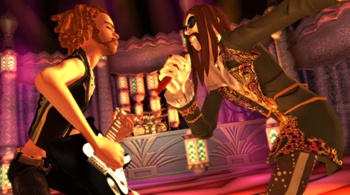 There are also more opportunities for your band to come together as Harmonix has introduced the Battle of the Bands concept into Rock Band 2. Updated regularly throughout the week, the Battle of the Bands features a variety of different challenges and playlists for bands of all sizes, from solo guitar contests to four-player score battles Should you best the other bands on your friends list, your score is then uploaded to the main leaderboards where you can then duke it out on a global level. This does, of course, come at the cost of fully-fledged, online multiplayer between two simultaneous bands, but it’s not as though this is a major loss. Harmonix does a great job with the Battle of the Bands by displaying the custom band logos throughout the challenge, complete with a tug-of-war score meter that constantly reminds you exactly what kind of competition you’re up against. Should you not feel up to such competition, the offline-focused challenge mode offers up the same style of progression as the original Rock Band with playlists of songs tiered by difficulty.

As with just about every rhythm game on the planet, the selection of songs featured in Rock Band 2 is entirely up to debate and while Harmonix has done great job overall, its attempt to please everyone still leaves some sore spots. I never thought I’d see Bikini Kill (“Rebel Girl”) in a rhythm game and the long sought after inclusion of AC/DC (“Let There Be Rock”) is just the tip of an incredible set list. The beauty of Rock Band 2 is that thanks to the World Tour mode, you can complete the game while avoiding practically every song you don’t like along the way, with the rare exception of having unfortunate songs pop up during a random set list.

And so, the first criticism comes in the form of disliking the choice of numerous butt-rock bands. If that seems a tad frivolous, really, just any other complaint one can muster towards Rock Band 2 does as well. Harmonix’s was perhaps a bit overly-ambitious, as 20 songs that should have shipped on the disc have since been branded as “free downloadable content” to come someday between now and the day the Sun explodes, the stat tracking website is still not available and you still can’t buy real world merchandise for your band – a feature Harmonix has been touting since before the release of the original Rock Band. These complaints really don’t have much to do with the gameplay itself, but it does feel as though we’re not getting the entire package as it was originally intended. I suppose Harmonix needs something for the inevitable Rock Band 3.

Bottom Line: The best music game in the business just got a whole lot better.

Recommendation: Buy it. You can never have enough plastic instruments.

Jared Rea is a freelance games writer who has been playing rhythm games for a decade now, loves his Pop’n Music, and can’t believe how far things have come.