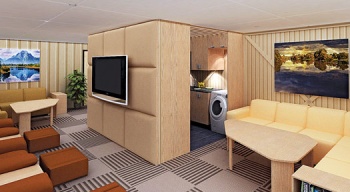 Entrepreneur Robert Vicino is building 19 Vault-Tec-esque underground bunkers that are equipped to withstand a nuclear apocalypse – or any apocalypse, for that matter.

Vicino was inspired to build the bunkers after hearing about the Mayan calendar, which predicts the end of the world on December 21, 2012. “It just gave me this gut-wrenching feeling that I needed to convert a mine to a shelter for 1,000 people with everything you’d need to survive for a long period of time,” Vicino states. And so, he did.

His first – dubbed the Barstow bunker – is located about 50 miles into the Mojave Desert. At the surface, the bunker is less than impressive. It’s a basic garage in a barren lot surrounded by razor wire. But if you descend the two flights of stairs and head through the 3,000 pound blast door, you’ll find a space that Vicino describes as “compact but luxurious, like being on a cruise ship.” So far, 75 people have put down a $5000 deposit for an assumedly-coveted spot in the bunker. It will only hold 135. Each bunker is able to withstand a 50 megaton nuclear blast from ten miles away, 450 mph winds, a mag-10 earthquake, ten days of 1,250°F surface fire and three weeks buried under a flood. Each bunker will also be equipped with a sophisticated air ventilation system that will neutralize any biological, chemical or nuclear attacks. However, the article doesn’t go into much detail about how – or if – these features have even been tested. Vicino has plans to build additional bunkers in North Carolina, Pennsylvania, New York and somewhere in the Midwest.

Even if you’re not worried about the impending apocalypse, it might be worth coughing up $5000 just to get your name on the list. Not only do the mock-ups feature a treadmill, large HD-TV and expensive-looking recliners, but Vicino also claims that each bunker will have a freezer stocked with the DNA of various species and a security staff on call to place any disruptive members of the bunker into a detention room.

However, not just any Joe Plumber with extra spending money can buy a spot in one of these underground bunkers. Vicino has about 5,000 applications pending, but wants to create a stable, dynamic group for each bunker. “You wouldn’t want 200 doctors in one facility and no plumbers,” he says. “If the toilet breaks, that could be a real disaster.” Perhaps he could borrow a question or two from the G.O.A.T.