Even robots can get caught red-handed. 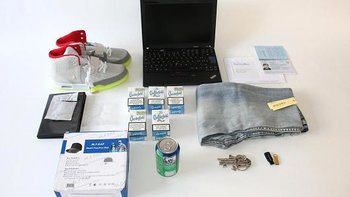 In order to explore the dark web and its many hidden vices, Swiss art group !Mediengruppe Bitnik created a robot with one purpose: Buy all the illegal things!

The “Random Darknet Shopper” was programmed to take its weekly allowance of $100 in Bitcoin and use it to purchase something random from Agora, “an online marketplace on the dark web where shoppers can buy drugs and other illegal items.” These items were delivered directly to a Swiss art gallery for the creation of an art exhibit. The robot went on its merry way, purchasing random items from October 2014 until January 2015, when it finally had a run-in with Swiss authorities.

In January, the Swiss police confiscated both Random Darknet Shopper and its stash, which included “a Hungarian passport, Ecstasy pills fake Diesel jeans, a Sprite can with a hole cut out in order to stash cash, Nike trainers, a baseball cap with a hidden camera, cigarettes and The Lord of the Rings e-book collection.”

After three months (and the destruction of the drugs), the Swiss police returned the intrepid robot to its owners and decided against charging the art group further. Thomas Hansjakob, a spokesperson for the Swiss St Gallen police, told CNBC,

“We decided the Ecstasy that is in this presentation was safe and nobody could take it away. Bitnik never intended to sell it or consume it so we didn’t punish them,”

!Mediengruppe Bitnik stated in a blog post last week, “This is a great day for the bot, for us and for freedom of art,” and I have to agree. It’s pretty cool of the Swiss police force to let both the bot and its creators off without taking any further action, although I do feel a badly for poor RDS, programmed directly into a life of crime.