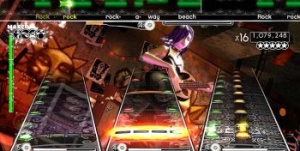 According to Rock Band developer Harmonix, the note charts in the Guitar Hero series are “disconnected” with the music.

Alex Rigopulos, head of Harmonix, acknowledges that although his new multi-instrument series might be easier than Activision’s, he runs Rock Band development with the goal of honoring the music gamers will play.

Despite still selling millions across consoles and handhelds, the Guitar Hero franchise has recently taken criticism for its difficulty curve and finger-numbing note patterns.

“The guiding philosophy for us when authoring patterns is staying true to the music. What we found was if material in Rock Band was actually easier compared to Guitar Hero, it’s because the actual guitar parts are easier, whereas the design mandate for GH seems to be more focused on a gamer mentality in ratcheting up the difficulty,” explained Rigopulos. “What you see are these note charts that are very disconnected from what’s actually happening in the real guitar parts in the music; they might be more crazy from a gameplay point of view, but they’re also more disconnected from the music. So for us, that departs from our core design mandate.”

None of this is means that Harmonix is shying away from songs with frantic fretwork.

Rigopolous hinted, “That said, we are bringing some music to the platform, which we’re not ready to talk about yet, that the nature of the music itself is so insane, it will be the most challenging material imaginable to play in the Rock Band universe.”