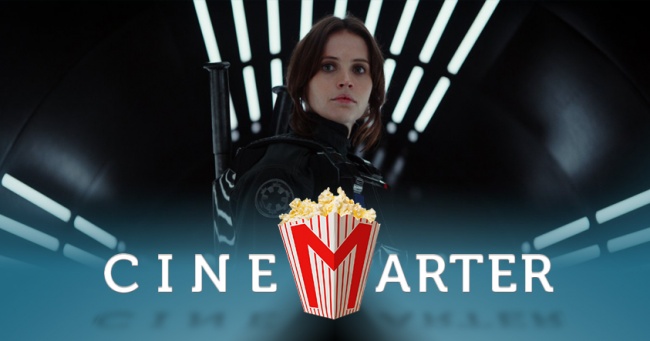 If there’s one thing that Rogue One should make clear, it’s that we don’t need yearly Star Wars movies. If this is the best that they can come up with for spinoff, standalone films, I’ve got a bad feeling. Here’s a movie that has two story credits, two screenplay credits, and feels like what a fifth-grader would make up when playing with LEGO figurines. Movies where we know the conclusion can work, but the journey has to be worth it; Rogue One‘s journey is a bunch of unexciting set pieces starring interchangeable parts. Maybe a good Star Wars prequel is beyond the capabilities of humanity.

The plot follows members of the Rebellion as they … do stuff. I don’t know, Star Wars fans – how much am I allowed to say without being yelled at for “spoiling” things (whose conclusions we already know)? The crux of the story is that there are plans for the Death Star that need stealing, as there’s a now-famous (to us) weakness of which the rest of the Rebels need to be made aware. A rag-tag group of unlikelies is going to try to accomplish this. What I’m describing is also only the last 45 minutes of a film that runs for over 130.

The first two-thirds have to bring our heroes together, and do so in a jumbled, confused mess – one that comes across as an editing nightmare and will likely disorient audience members. If there’s a protagonist, it’s Jyn Erso (Felicity Jones), who fits the role if only because she’s given a back story. Her father (Mads Mikkelsen) was effectively captured and forced to work on what would eventually become the Death Star, and Jyn’s largely been on the run for her entire life. But when the Rebels come calling, asking her to help track down her father, she’s not given much choice but to help. Along the way, we meet a bunch of other characters, all of whom apparently have names – but I’d need to consult the internet to learn them.

Do you know why you do stories whose conclusion is already known? To give us insight into how it all happened, to show us the players that allowed it to be possible – and maybe give us some understanding of who they are and why they’re doing what they’re doing. Apart from Jyn, there’s almost none of that here. The one with the second-most screen time is Cassian (Diego Luna), who purports to have lost a lot and committed atrocities but goes into no detail – and doesn’t actively seem to be impacted by either point. One character is blind and repeatedly says “the Force is with me and I am one with the Force” – and that’s his entire character!

There’s nothing to these people, and we’re supposed to care what they’re doing – especially when we know the ending? The filmmakers are given more than two hours with which to play and accomplish little more than a one-page synopsis or a three-minute trailer could do. “Okay,” you say, “but what about the excitement of seeing this heist mission play out?” The problem with that is that the director is Gareth Edwards, and he doesn’t seem to know how to generate excitement. He struggles to frame and stage action on both small and large scales, with most of it coming down to nameless faces fighting faceless heels, with no sense of space or any reason to care about what’s going on. Rogue One has one of the blandest space battles I’ve ever seen. Even when our main cast is involved, we struggle to feel any connection to them.

Rogue One is an emotionally and intellectually vapid movie that serves only as expensive fan service to tide fans over while they wait for Episode VIII.

People like to complain about the Marvel movies for having a lack of perceived stakes, but the truth of the matter is that they do – because we know, understand, and in part care about the people in the battles. Rogue One might feel on the surface that it has more stakes – it always feels possible, even with poor Stormtrooper aim, that a main character could die – but because there’s no connection to them, it matters even less. Sure, there’s a greater chance someone won’t make it through the scene, but we don’t care, so it doesn’t matter.

A darker tone, though, is one of the things that differentiates Rogue One from other Star Wars movies. Beyond a snarky droid (voice of Alan Tudyk), there’s almost no comedy. It’s a grittier movie – both in tone and cinematography – and showcases a less pleasant side of war. If it did anything with that, Rogue One might work. The movie is thematically shallow, though, and doesn’t want to do anything more than provide an expensive bit of fan service to tide us over until Episode VIII.

Even the special effects are a mixed bag. They’re mostly solid, don’t get me wrong, but there’s some uncanny valley face work done, either to de-age actors or in one case bring them back from the dead. No spoilers, but it’s not all-the-way successful. The film also pauses and gives itself a congratulatory pat on the back each time it wants to introduce a nostalgia character, drawing even more attention to them. Even the effects that look great are in service of a story that wasn’t worth telling and following characters that don’t matter – at least as far as the filmmakers are concerned.

I’m several paragraphs in and haven’t even mentioned the villain. He’s just a guy – a bureaucrat – who constantly seems not to be in control of much and is also not terribly evil or dangerous. Yet another Rogue One waste, I guess. I’m trying to come up with anything that works here, folks, and I’m drawing blanks. I don’t begrudge those who enjoy simple nostalgia and fan service, but it has to be called what it is, and a good film Rogue One is not.

Rogue One is an emotionally and intellectually vapid movie that serves only as expensive fan service to tide fans over while they wait for Episode VIII. It is a different type of Star Wars movie, but any benefit to be gleaned from looking and sounding different is lost by telling a thin, bland story whose conclusion is already known – and one that contains characters the filmmakers fail to make interesting. We have no reason to watch this tensionless, thematically empty bit of cinema, except to giggle with nostalgic glee when a line or character from previous films makes an appearance. That’s not even close to enough to allow me to call Rogue One a good movie.

Bottom Line: Rogue One is terribly disappointing and does not serve as a good indication of what’s to come from the yearly Star Wars experiment.

Recommendation: It doesn’t matter what I say because you’re going to see Rogue One anyway. But if you’re one of the few who isn’t, maybe skip it.