I came to a realization the other night. I was sitting drinking my way to an early grave as usual and half-listening to a conversation someone across the table was having about their Dungeons & Dragons campaign and what their characters had been up to lately. And this was the realization I happened upon, gentle reader: that it is impossible to give a shit about someone else’s pen and paper role playing character. Seriously. Try it.

Well, presumably you’d give a shit if you were playing in the same campaign, are the individual in question’s psychologist, or are keen enough on fucking them that you’re willing to absorb whatever twaddle comes out of their mouth. But this cannot be communicated to role players enough: please do not start talking about your character because no-one outside of the above small and very exclusive list gives a shit. It’s not because you’re surrounded by very rude people or because your alter ego is particularly uninteresting. It is just literally impossible to care.

In the same way that it’s impossible to care when someone tells you about a dream they had, or about this idea they’ve got for a novel that they’re totally going to start writing any day now. Because at this point we’re talking about stuff that doesn’t exist and holds significance only within your no doubt impressive imagination. Draw me a picture of your character and ask me to criticize your artistic ability. Recreate your dream on the Star Trek Holodeck with hippos and cod liver oil. Then I will have the ability to care. Until then, it’s all just stuff you made up in your brain. I can do that too. Oh, your dark elf ranger successfully pierced all seven eyeballs of Yushg, guardian of Emperor Buaristein’s Tomb, did he? How interesting. Hey, did you know that Horace the pig has stolen the silver buckles from the cuban heeled boots of the anti-life equation? I just made that up in my head. Do you see how this works?

No, when what you’re describing is limited only by what the human mind can conjure and put into sputteringly eager words, then nothing you say has any weight, because whatever you say, I can then retort “Why weren’t you all doing it wearing black tie on a magic carpet?” or something, and suddenly your version doesn’t seem as interesting. But I’ll tell you what is interesting to talk about – role playing in role playing video games.

Because in a video game the role playing is a directed experience within a fixed world that large numbers of other people can also access, and which cannot be modified by the DM getting bored and declaring that rocks fall from the ceiling and kill all the goblins you’ve used up half an hour trying to kill. When I’m playing an RPG like Skyrim or Old Republic, I relish talking to other people playing the games at the same time, learning how their character’s turning out and what quests they’ve been doing that I skipped. This is something I’ve referred to before as “water cooler gaming” and it’s always a good thing for a game to emphasize if it wants to leave a mark on the surface of our collective culture.

I guess what I find appealing in it is that I learn about the road not travelled, and the potential people my character might have become if I’d taken a different path here and a different path there. It makes me somehow more attached to my character as I begin to grasp how many things make them so uniquely and singularly mine, even if it’s just what kind of moustache they’re wearing. And that doesn’t apply when one talks about pen and paper role playing avatars because the potential is literally infinite, and therefore impossible to get one’s head around. 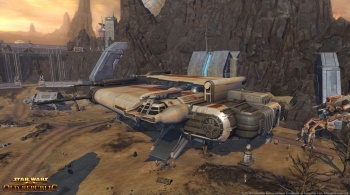 As I mentioned in my discussion of Dragon Age 2, I do like to try to get into a character, filling in backstory the game doesn’t give in my own head. I think it’s missing out not to, when “role playing” is right there in the title. But this is rarely something you can do right off the bat. I have to go through a few conversations and make a few character decisions to get a hold on their personality. What’s interesting, though, is that sometimes their personality unconsciously grows into the appearance I chose at the start. In Dragon Age 2, I set out with a floppy hairdo and a cynical, self-effacing droopy-eyed look evoking a young Ian McKellan and ended up a snarky pillock who prefers hot dogs with all the trimmings over salty tuna sandwiches (oh Anders, why don’t you ever write?).

So as I said in the video I opted for a Republic Smuggler, and for race I chose Cyborg. This was a rather insidious move on Bioware’s part wherein they copy pasted all the assets for the human characters, replaced their facial hair with a selection of Borg implants and then claimed there are four whole races to play as. I assembled a fairly generic, dark-haired, boyishly handsome fellow, then went through the options for cybernetic implants. For some reason, the one I kept coming back to was a rather ugly metallic pipe running horizontally along the middle of the face and feeding up the nostrils, like one of those oxygen tubes they might put on you in the hospital. At first I thought it seemed ungainly, but then I realized, if anyone saw this bloke, the first question to leap to their heads would be “What’s with the face tube thing?” It was a feature. A talking point. Backstory. So I ran with it.

My character was born to interplanetary surveyors. They did a lot of travelling around, and as a consequence of breathing too many alien atmospheres at a very early age, I contracted a pulmonary condition that ensures I will die if I do not constantly breathe a mix of prescribed gaseous chemicals. Unfortunately these chemicals are very expensive, and when I came of age and my parents lacked the money to both buy the gas and give me a proper space-education, the kindly family physician mentioned under the table that the stuff is sometimes used recreationally and may be cheaper to get hold of in the unregulated black market. A deal was brokered with a smuggling operation and all was well until pirates traced a shipment to my parents’ vessel, slaughtering them and stealing my precious gas. Desperate, I turned to the smugglers and offered to join the bottom rung in return for a supply of what I needed to survive. Over the years I earned their respect and was finally able to break off into an independent operation, a cynicism beyond my years formed ‘neath my deceptively youthful looks.

During the game I played Light Side but took every conversation option in which I grumblingly demanded hasty payment. My history had left me with a strong moral compass and hatred of pirates, but with the constant need for medication and the money to pay for it, I was also coldly realistic in my approach to working for hire.

See, to get into role playing games you have to know how to role play. What I’ve always liked about videogame storytelling is that to a greater degree than any other form of art it’s a collaboration between the designer and the audience, and this is a nice example of that in action. It is important to let the game tell the story it wants to tell, though. It’s a short step from the above to writing fan fiction, and that never ends well for anyone. The next thing you know you’ve written an entire novel about your character, then changed all the names and published it through Dark Horse.