Gossip has been a part of movies for at least as long as movie stars and the studio secrecy that came with them became a thing at the turn of the century. But since the mid-1990s and the advent of fanboy-focused guerilla news outfits like Aint-It-Cool-News, the definition of hot gossip has expanded to include plot details, cameos and even long term story plans.

I used to think once I was conducting movie journalism as a pseudo-professional, I’d become less likely to believe news allegedly culled from anonymous sources, but the opposite has become true. Even playing this game at my level (i.e. far removed the L.A.-centric upper echelons of “in the know” film press), the amount of loose talk one hears around about this or that project is pretty remarkable.

Not that I’ll be spilling anything I know or don’t know here – that would just be silly. Nor will I be dropping anything that I know or even heavily suspect might qualify as a real spoiler (though if you’re seriously spoiler-phobic, this may not be the article for you all the same) for an upcoming movie. What I will do is take a look at some of the bigger “Did you hear?” whispers floating around the web and offer my perspective as to how plausible they actually sound.

Let’s get real for minute here. Anyone looking to make a new Star Wars movie wanting Luke, Leia and Han to come back for guaranteed cheers in the trailers and big splashy press interviews about “coming home” and such is not news. Of course Disney wants that, and of course those were among the first three phone calls anyone working on this was instructed to make.

As for whether or not any of them would actually do it, with the exception of Ford (who only shows up for something if he actually wants to, at this point) I’d say chances are pretty damn high. Yes, Hamill and Fisher are both far from the poor house, but they (and their families) could certainly use the mountains of gold they can demand from The Mouse to walk across a green screen and give the Jedi Generation a final triumphant wink. Also, all involved seem to be much more at peace with the franchise than they were even a decade ago, and being feted like red carpet royalty (maybe taking a cast bow to a standing ovation at that year’s Oscars, for example) would make for a pretty excellent coda to career stories that currently end on “eventually re-invented himself as a sought-after voice actor” and “ongoing struggles with drugs, alcohol and other issues,” respectively. Remember, everyone from Star Trek was pretty much considered a has-been until they started making the movies.

Rumor: One of the established members of The Avengers will play a significant but thus-far unannounced role in Guardians of The Galaxy

Guardians is currently set to be the last Marvel Studios movie before Avengers 2, and is in many ways the riskiest project the studio has undertaken so far. After all, it’s a space opera involving a team of aliens whose membership includes a sentient tree, a lady warrior and a talking bipedal raccoon. It’s been known from the beginning that the film would in some way serve as the lead-in to Avengers 2, likely because already-slated alien villain Thanos the Mad Titan is a key part of GoTG mythos.

Still, it certainly wouldn’t hurt Marvel to hedge their bets and have someone a little more familiar to audiences turn up at least to make the connection solid. This is a studio that loves to roll the dice, but it would be a miss and then some for the only original part of their post-Avengers victory lap to underperform. Plus, Guardians – billed as a more comedy-inflected cousin to Star Wars or Firefly – is part of a larger bid to establish that the Marvel brand can effectively sell movies other than straight superhero fare.

I won’t say which one, but rumors that one of The Avengers will be joining up with the Guardians in some capacity have been drifting about for a while now, buoyed by “leaked” (and then promptly pulled) photographs of an action figure that could, with a little imagination, be construed as possibly Guardians-related. It all makes a certain amount of sense, but in reality we could very well not know until GoTG comes out two years from now. 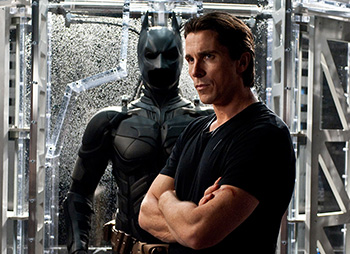 There are some corollary rumors to this one, the most prominent being that Warner Bros. thinks they have a major, major hit on their hands in Man of Steel. No press or even test-audiences are known to have seen the film (which is supposedly not even fully finished effects and editing-wise yet) but people in executive positions at Warners and some merchandising/licensing partners are said to have seen it and the early buzz is overwhelmingly positive. Granted, these are the reactions of the “money people,” so there’s no way of telling if this means the movie is actually any good, but at least they seem to think it’s going to sell a ton of tickets and move a lot of action figures.

As such, press reports started to hit last week that Warner Brothers (which recently killed the reportedly awful Justice League screenplay and was said to be putting the whole project back into “wait and see” mode) was finally considering an option that had previously been thought prohibitively expensive: Backing dump trucks of money up to the respective front doors of Christopher Nolan (who produced and had story say over Man of Steel) and Christian Bale to get them onto the project – even though both had expressed no real desire to revisit the franchise and Nolan especially having structured his Batman series to be both over after the third installment and deliberately incompatible with a more sci-fi/fantasy oriented DC Universe.

The whole thing makes obvious business sense. It’s been established that Christian Bale simply isn’t a movie star without his Bat-kevlar (good actor, don’t get me wrong), Nolan could use the career invincibility that would come from gritting his teeth and becoming the “godfather” of a DC Movie-verse he clearly has no real interest in (and maybe a little contempt for), and WB would like to not worry about making people accept a new Batman.

Speaking only for myself, though, I wish there was another way. Much as I like the Dark Knight trilogy, I was done with The Nolanverse Batman with an hour still left to go in The Dark Knight Rises and was really hoping that League would be an occasion to finally let go of “gritty realism” and allow Batman etc. some fun again. Plus, it’s not like Nolan doesn’t have weaknesses of his own – I’m not exactly looking forward to a Justice League whose Wonder Woman exists primarily as a receptacle for expository “mainsplaining.”

Rumor: There will be at least one more Indiana Jones

Here’s the thing: George Lucas is effectively retired. As much as damn near everyone would prefer to see the series continue (if it must continue, that is) without his input, that’s not going to happen as long as Steven Spielberg (who’s way too busy to do this anyway) has the final say. The fact is, while the Indy saga means a lot of things to a lot of fans, to its creators it’s a mutual bonding experience above all else.

Spielberg and Lucas were not initially on the friendliest of terms back when they were both acolytes of Francis Ford Coppola’s young filmmaker clique in the 70s, but they became close when Spielberg unexpectedly became the big defender of Lucas’ risky Star Wars project. According to Hollywood legend, said creative friendship was cemented when the two opted to take a break from a days-long beach-house party to go build a giant sandcastle – during which time they started bouncing ideas off each other for a “gadget-free James Bond movie” that would eventually become Raiders of The Lost Ark.

In other words, making Indy movies for Spielberg is primarily a thing he does for fun with his buddy George. So don’t hold your breath.