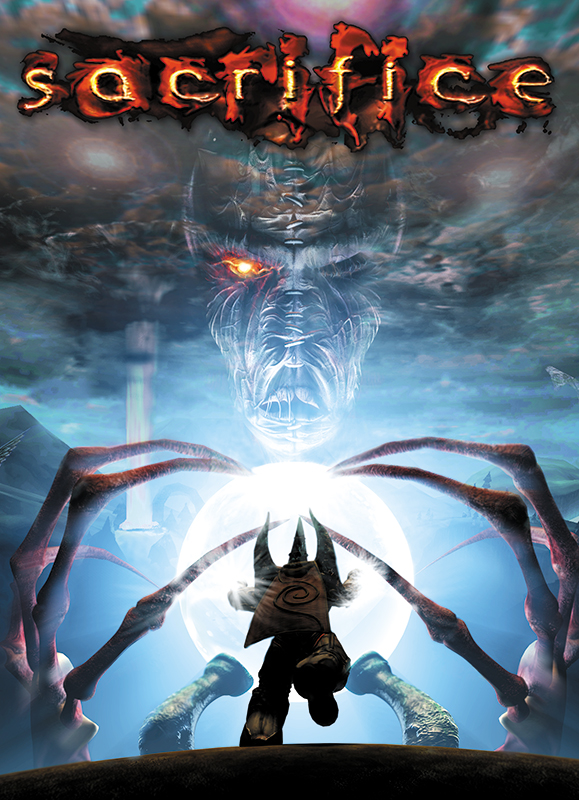 Sacrifice is fantasy-based real-time strategy game that delivers an interesting story and impressive replay value, but hampers itself with an unhelpful camera that works against the rest of the otherwise solid gameplay.

Thanks to Escapist user SnakeTrousers for requesting this review!

Sacrifice is an interesting game. And I don’t mean that in the Postal 2 way where I describe one or two good things about it and then tear it down like there’s no tomorrow. Sacrifice is interesting in a way that I can understand its fans not only remembering it years later, but also overlooking some of its bigger flaws.

Taking place in a fantasy universe dominated by gods and wizards, the player takes on the role of a sorcerer fleeing his own world which has recently been devastated by a demon that he summoned to it. Arriving in a new world, he finds a landscape split into islands ruled over by five gods who, for the most part, live in relative stability with one another. As tends to happen in games, however, things quickly go awry and soon the gods of the new world are at war with one another with the player sitting at the center of the conflict.

And it’s a conflict that’s delightfully unclean. While each of the gods definitely falls on one spot or another on the alignment scale, not a one of them comes off as a paragon of good that you’d have to be a jerk to go against. These shades of grey extend to the player character who, for all intents and purposes, was the catalyst of his own world’s destruction and is now using the emerging turmoil to raise himself back up to a position of power.

Your character’s fluid loyalties aren’t just a narrative device either. They’re integrated into gameplay in some really nifty ways. Most notably during the story campaign, you’re able to take missions from differing gods. This might not sound that impressive a feature on paper, but it becomes more noteworthy when you realize that championing a different god can give you access to different skills and units. I, for instance, started off my game by fighting for the chaos god Charnel who rewarded me with some rot/bug themed units. I followed that up with a brief stint as a servant of the Pyro, who gave me access to a fire spell and the Tickferno unit. By the game’s end, my forces and abilities were probably a more eclectic mix than I’ve ever seen in another strategy game. The best part is that, if I wanted to, I could restart my campaign, choose different gods and play through the whole story again using a completely different set of abilities. Toss in multiplayer features and skirmish battles against the AI and it all adds up to a game with a hell of a lot of replayability. 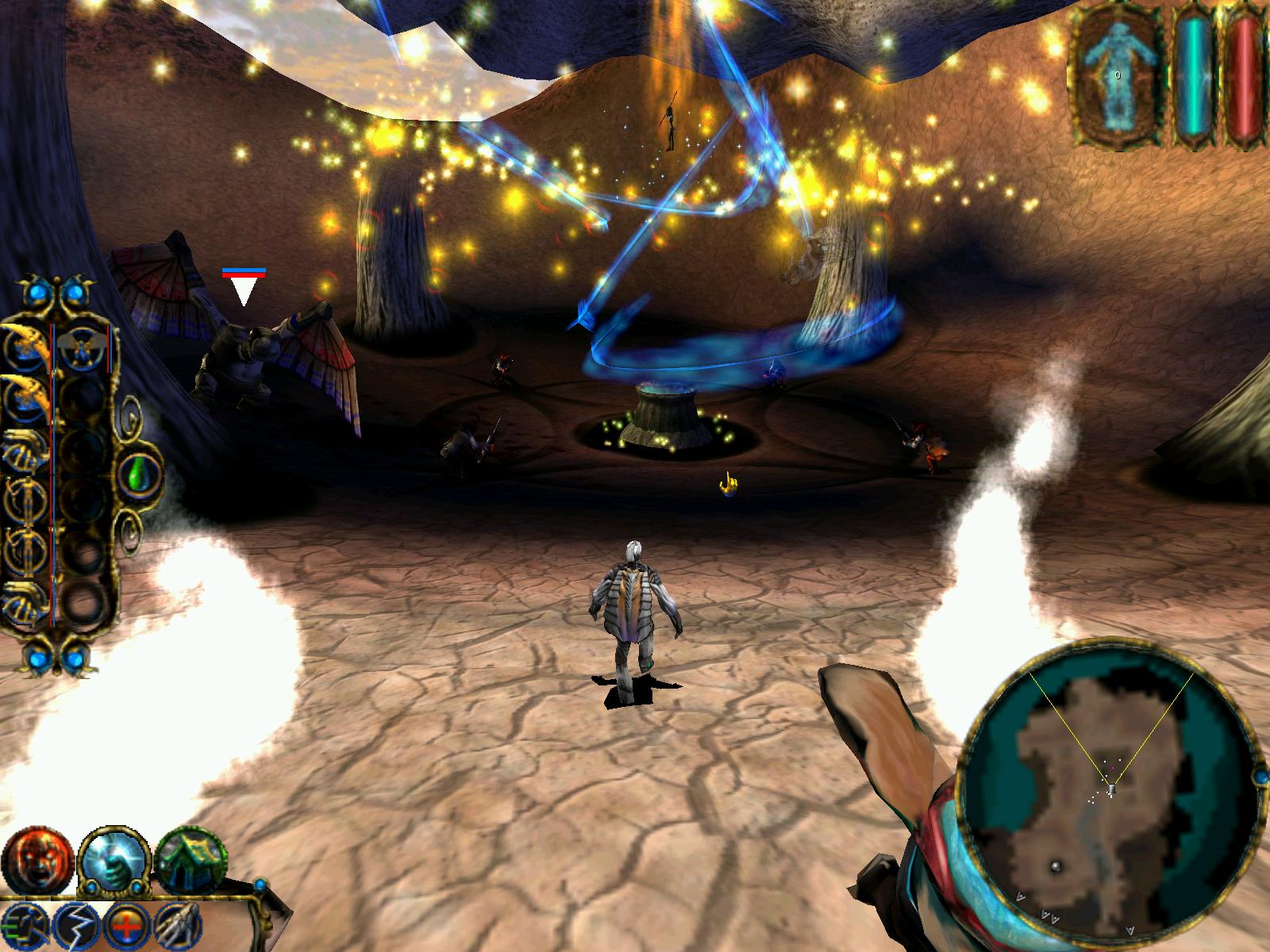 Which is great as long as you can get past the issues that, unfortunately, drag Sacrifice down. Most centrally, its camera is in no way up to the task of command in a real-time strategy game. The problem lies with the fact that, unlike most RTS games, you’re not just an omnipotent spectator directing your troops from some cloud above. Rather, your wizard is a unit in their own right, capable of doling out damage with spells and being killed by enemies in addition to commanding your troops.

I should say that on a conceptual level I actually love that sort of thing. Mount & Blade has been one of my favorite games for two years now based solely on the fact that it absolutely nails the experience of giving the player command of an army while also tossing them into the violent, bloody fray. The thing is, Mount & Blade manages to make this work by keeping things relatively simple. Your commands are mostly different variations on “move here” and you can fight your way through an entire battle while only giving a few orders. Sacrifice, meanwhile, drops you into the battlefield but then expects you to cast spells and micromanage your troops all from a third person perspective.

And it’s here where that the aforementioned camera comes in. It’s fixed too close to the ground and even when it’s zoomed all the way out you’re only ever able to see a small fraction of the battlefield, making it difficult to respond to anything not in your immediate field of view. In turn, it’s really easy to get locked into a fight and forget about some of your troops because they drift off the edges of your vision. Moreover, having combat take place so close to your face frequently turns it into a jumble of units that mix and move so quickly that you’ll have a hard time picking out an individual unit to command or attack. 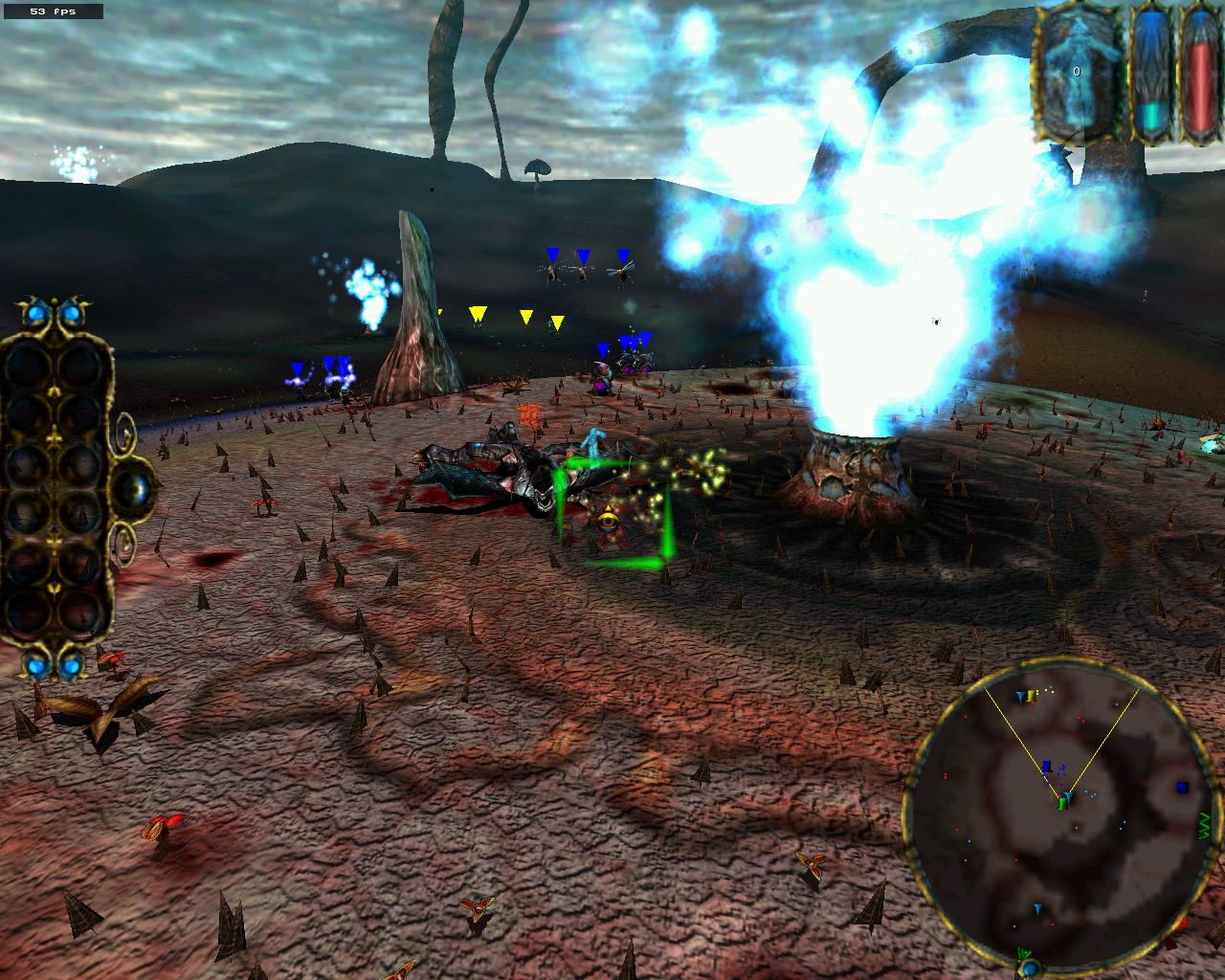 Now, to be fair, you can pause the action at will if you need a second to do all of the things I just outlined as being a challenge. That being the case, when you’re dealing with dozens of individual soldiers and skirmishes that, frankly, are sometimes too frequent, it can be a real drag on the fun factor when you find yourself having to constantly pause to accomplish anything strategically. It’s not called “real-time” strategy for giggles, after all.

There are other problems, as well. While I’m always happy to see RTS games try something besides base building, I never wound up being a fan of Sacrifice‘s soul system. The way it works is fairly simple. To summon units you need souls. Collecting new souls to expand your army means killing enemies and then converting their heathen souls over to your side. The thing is, this process isn’t the speediest and I can’t count the number of times I’d start a conversion just to have the opposing wizard skip their way through the area and re-collect them before I could finish.

Mind you, it’s not that I don’t get why the developers made it this way. It’d be as much of a problem if they made it a cakewalk and let me just have the souls sans resistance. That said, the way it’s executed left me feeling too often like I was caught in a stalemate, fighting the same enemy squads over and over again because their wizard was resurrecting them before I could make any real progress.

However, even with these problems, it should be noted that I still had fun with Sacrifice. It was definitely tempered at times by elements that I wasn’t keen on but, if you can learn to accept those parts, there’s still a lot to be enjoyed, including some things that I haven’t really had a chance to touch on that much. The visuals, though dated, have a real nice sense of variety that takes interesting steps outside of the usual fantasy fare. The voice cast, likewise, is utterly fantastic, featuring talents like Jennifer Hale, Tim Curry and Brad Garret, all of whom give great performances. That in mind, while I’d place Sacrifice far from the perfect end of the scale, it doesn’t tilt anywhere near enough toward terrible that I’d try to dissuade you from giving it a go if you’re interested. For only $9.99 at GOG, you could certainly do a lot worse

Next week we return to the N64 to look at one my favorite action games: Battletanx. In the mean time, feel free to PM me suggestions for games and any other comments you think I need to read!