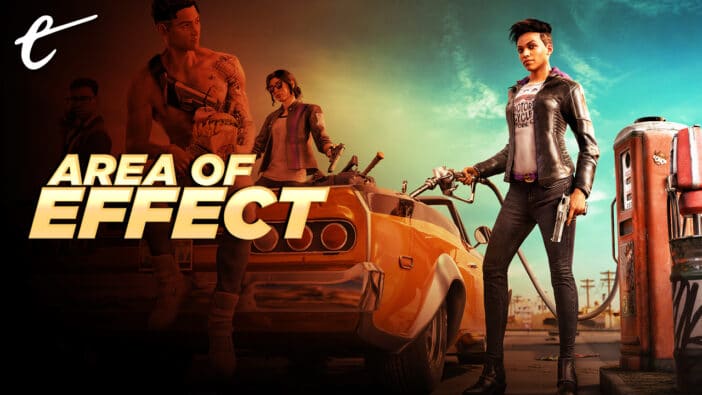 If at first you don’t succeed, take a selfie in the shadow of a giant fiberglass meatball. That’s the life-changing lesson Saints Row has taught me, which is why, when I should have been building my empire, I spent hour after hour just pottering around the game’s Badlands.

No, it’s not that I wanted to get as far away from my “friends” as possible; Saints Row’s new gang members grated a little, but they grew on me. Rather, what fascinates me about the Badlands, the outer reaches of the Saints Row map, is that they’re a veritable treasure trove of roadside Americana.

Santo Ileso, where Saints Row takes place, is modeled heavily on Las Vegas, and as such, it’s made of multiple districts, surrounded by vast stretches of desert. Roam far enough and you’ll be greeted by an angry countdown, urging you to return to the city.

Instead of making this buffer zone road after dusty road, Volition has gone to the trouble of populating it with trailer parks, rest stops, and a wealth of roadside attractions. The giant meatball skewered by an even bigger fork is just one of many, many absurdities, and it’s fantastic to behold them.

Sure, if you’ve reached that point in the game, you can pinch a helicopter and experience them from a bird’s-eye view, but you’re missing out. There’s nothing quite like borrowing someone’s car and stepping out to gaze up at the magnificence of a massive, motionless dinosaur you spotted. 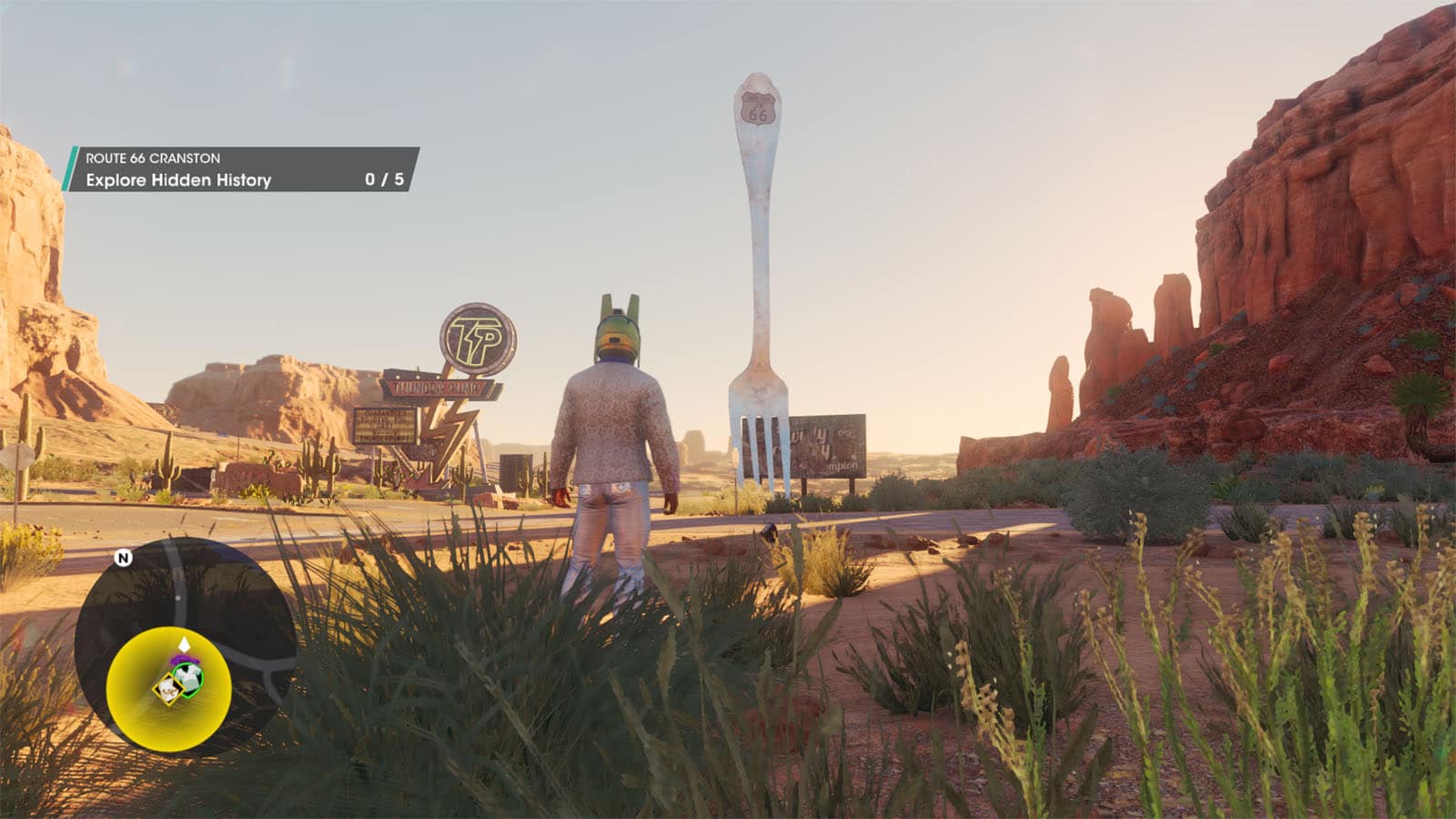 What’s the big deal, you might wonder? After all, while the Saints Row reboot may not be quite as ridiculous as Saints Row IV, it’s still a silly game with a taste for satire. But the wonderful thing about these roadside attractions, these chunks of weird Americana, is that they’re all but ripped out of reality.

I’ll admit, when I was playing Sam & Max Hit the Road, I didn’t immediately register that The World’s Largest Ball of Twine was anything other than a gag location. It wasn’t until a few years later that, thanks to the internet, I stumbled across the real-world locations that the game was mocking.

So, Saints Row’s giant rattlesnake statue might seem weird for weird’s sake, but it’s echoing the real-world locations that crop up along America’s dustier highways or in its smaller, less notable towns. Their origins vary, but it’s one hell of a way to put a rest stop, gas station, or small town on the map.

Take Margate City, New Jersey; it’s home to around 6,000 people and Lucy the Elephant, a 65-foot pachyderm-shaped building that was, until it was closed for repair, an Airbnb. Then there’s Western Nebraska’s Carhenge, which is exactly what it sounds like, the World’s Largest Mailbox in Casey, Illinois, and Santa Cruz’s “gravity-defying” Mystery Spot. And no, I’ve not made a single one of those up.

Saints Row doesn’t give you freedom to roam the whole of Nevada — or its equivalent — but that works in the game’s favor. Instead of having to drive mile after mile, all the Saints Row roadside attractions are bundled together to the point where, once you’ve hit the fringes of the city, you’re never far away from some daft but glorious piece of Americana. 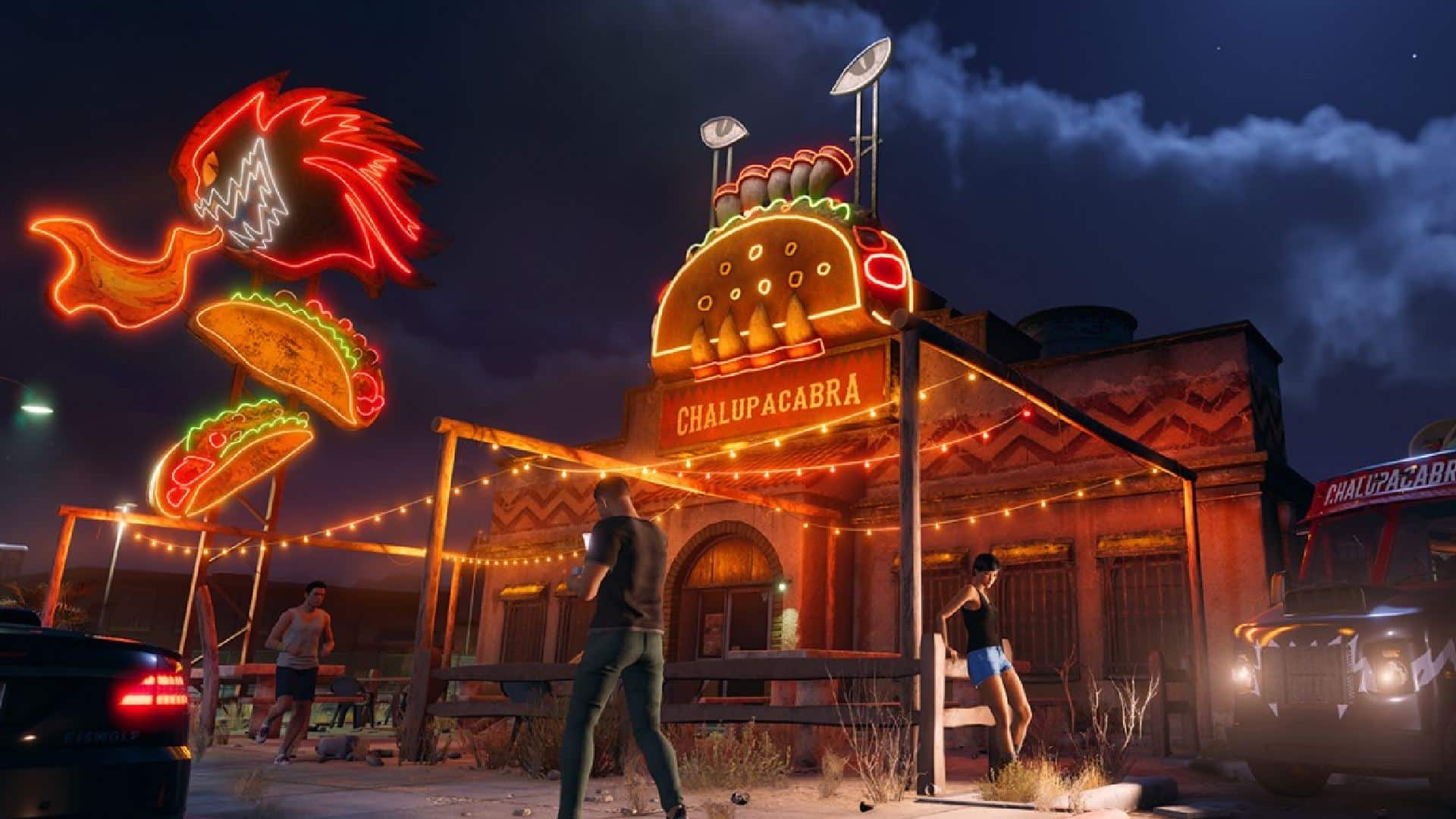 But that’s not all; what makes Saints Row’s roadside attractions even more of a joy is the way a few of them serve as a glimpse into the city’s history. In an ideal (virtual) world you’d be able to pore over every attraction and discover the truth, or at least the lore, behind their construction. Here, you can at least explore the origins of a handful of them, such as the fragment of a Wild West movie set that’s just sitting out in the open.

The icing on the cake is how you can photograph some of them and then display them in or around your church base. So many open-world games have you chasing down collectibles, thinking that gathering 100 out of 100 seagulls is enough. Saints Row, on the other hand, will let you greet visitors with a glaring, mechanical monstrosity.

Even though the game doesn’t fill in the backstory for every single chunk of weird America, that hasn’t stopped me from imagining how these oddities sprang to life. My head canon is that the owner of one gas station was sick of a customer making “fork in the road” jokes and so constructed a giant towering fork. The customer in question took umbrage and, one night, attempted to push it over, only to be struck by lightning. Hey, I can dream.

There’s a distinct lack of mucky puns, but Saints Row’s oddball attractions appeal to me far more than most of the game’s other locations. It’s drawing upon the real-world weirdness of roadside America and giving it the exposure it so rightly deserves.

I know that, long after finishing whatever missions and side-missions Saints Row throws at me, I’ll be coming back to gawp at the Taco joint with the six-story-high guitars. And then? Well, with any luck, Lucy the Elephant will be open for vacancies.