Continued from last week’s Part The First and spurred on by the release of the Evil Dead remake, we now rejoin our career retrospective of filmmaker Sam Raimi. When last we left off, Raimi and his close-knit group of loyal collaborators had been stymied by the box office indifference that greeted their first foray into mainstream Hollywood with the film The Quick & The Dead.

However, though his career as a director was bumping up against the “genre filmmaker” glass ceiling, he’d managed to become a well-regarded producer of studio action films via Hard Target and Timecop (two of the only three Jean-Claude Van Damme movies that actually hold up) and made an impressive jump to the booming mid-90’s syndicated television world with an unexpected hot property – a series of campy made-for-TV fantasy/action movies about Hercules, starring newcomer Kevin Sorbo in the title role.

As such, just as Quick & The Dead was landing with a thud in theaters circa-1995, Raimi and longtime cohort Rob Tapert were making a splash on TV so big that it turned “syndicated mythic-fantasy action shows” into one of the hottest genre markets in the world.

Officially, Raimi was “only” the producer for the massively-popular Hercules series, but his stylistic flourish and signature “Three Stooges meets Famous Monsters” aesthetic are all over it. For six seasons Kevin Sorbo played a swashbuckling variation on the ancient Greek hero, brawling with monsters and costumed henchmen in pulp-fantasy scenarios mostly filmed in New Zealand. In fact, this is often cited as the first production that turned American producers on to the usefulness of New Zealand’s natural beauty as uniquely well-suited to the genre – and it’s even been suggested that the local filmmaking and stunt-acting industry that grew up around Hercules (and it’s ultimately more successful spin-off Xena) directly enabled the ability of NZ’s homegrown answer to Raimi, Peter Jackson, to pull off The Lord of The Rings a few years later.

Either way, the series was such a massive hit that it inspired a wave of fantasy/action copycats seeking to apply the Raimi/Tapert style to everything from Sinbad to Robin Hood to Mortal Kombat (yes, really). And then there was Hercules own spin-off, which quickly became an even bigger pop cultural force than the original.


The setup for Xena couldn’t have been simpler or more obvious. A darker cousin to Hercules (the protagonist was a reformed villain from the earlier series), the series was built around the cheesecake-for-teenage-boys sex appeal centered on a female lead played by New Zealand native Lucy Lawless – but it quickly became something much bigger. Hercules and syndicated 90’s TV in general had no shortage of beautiful women in revealing outfits (this was, after all, the age of Baywatch), but Xena was unlike anything that the small screen had offered in terms of a female action hero in a long, long time. She was an enthusiastic brawler who relished combat, and retained a comfortably ambiguous morality throughout the series.

When the producers and writers learned (supposedly having never considered such before, though watching even the earliest episodes that’s a bit hard to believe) that the series had attained an almost immediate and massive following in the lesbian community, storylines began to push the then-taboo boundaries of such fare by subtly (and then quite overtly by the final season) playing up the “more than friends, maybe” bond between Xena and her companion Gabrielle. When popularization of feminine-centered neo-paganism became a mid-90’s trend among young women, the series dove headlong into revisionist histories involving Amazons, Druidism, Witchcraft and even pre-Helenic matriarchal religions (all filtered, to be sure, through Raimi and Tapert’s pop fantasy prism). By the end, Xena was one of the most offbeat and atypical popular series on the air.

Raimi ventured far from his comfort zone and into the territory of his Coen pals for this dark drama about a group of middle-class friends who slowly but inexorably turn on each other after discovering a fortune in stolen cash. The less revealed about the plot the better, but suffice it to say this likely remains Raimi’s strongest overall effort – an affecting drama that proves beyond a doubt that he’s more than the sum of his visual panache and gory bag of tricks.

Every filmography has a “huh?” wild card or two (I defy anyone to tell me Planet of The Apes would be discernible as a Tim Burton movie without Helena Bonham-Carter and Glen Shadix in the cast) and this film is Raimi’s. It’s a light, modest, coming-of-middle-age drama that’s self-consciously devoid of almost all his typical tics, tropes and even dark sense of humor. As a movie, it’s pretty darn good overall, but as an example of a filmmaker self restraint it’s almost mind-blowing.

It’s a star vehicle for Kevin Costner, completing his “Baseball Trilogy” as a soon-to-retire MLB ace who inexplicably finds himself in the midst of pitching a historic no hitter. As he does, his mind drifts in and out of flashbacks to the tumultuous relationship that he may (or may not) still have a chance to salvage. Yeah, it’s one of those kinds of movies, but I can’t deny that it works. A decent success in theaters, it found its true purpose as a perennial Father’s Day gift on DVD.

Raimi’s late-90s “All Growed Up” trilogy concluded with this Southern Gothic supernatural thriller, which earned critical raves, but in my opinion, it wasn’t nearly as good as Plan or Game were. Cate Blanchett is a homespun psychic/medium wrapped up in a murder plot involving Keanu Reeves and an eagerly post-Dawson’s Creek Katie Holmes. 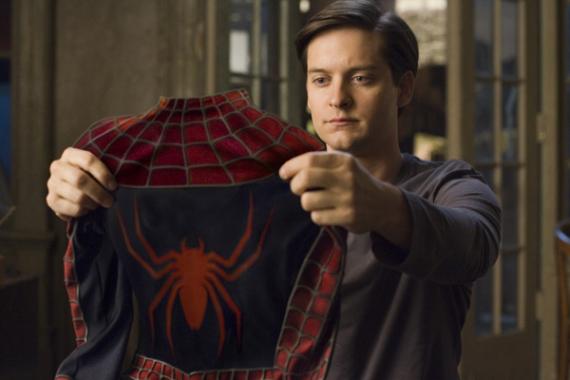 In early 2000, the news that Marvel Comics had untangled the infamously sketchy Spider-Man movie rights and begun pre-production on a live action film two decades in the planning was the big news of the movie geek world – especially coming on the heels of the shocking not-terribleness of Bryan Singer’s X-Men. For a moment it looked like all was lost as gossip sites reported that either David Fincher (brilliant but utterly wrong for the job) or Chris Columbus (ugh!) would land the gig.

I still have vivid memories of being able to head into my evening shift at the video store and report to my friends the breaking word (you couldn’t get the internet on phones yet) that Sam ****ing Raimi had been given the director’s chair instead. Total elation. One of “us.” The perfect possible choice.

The movie? Not perfect, but damn close. Like too many superhero origin movies, it has a killer first and third act but stumbles a bit in a truncated middle. But the stuff that works? The eye-popping Silver Age color scheme? Spidey’s ripped-from-the-page costume and not-overdoing-it humor? The definitive Aunt May, Uncle Ben and J. Jonah Jameson? Maguire’s pitch perfect Puny Parker? Dafoe’s iconic Green Goblin (yes, the armor look silly, but at least he’s wearing a mask like he’s supposed to instead of morphing into a creature like he probably will in the new ones)? The Kiss? That’s the stuff that film nerd dreams are made of.


I go back and forth on the exact order, but as of now my hierarchy of superhero movies goes like this: 5.) X-Men: First Class, 4.) Watchmen, 3.) Superman (1978), 2.) The Avengers… and Spider-Man 2 in first. Yes, it’s just that good. It has all the benefits of the first film with none of the origin story whiplash. The effects are better, the returning performers are more confident, Raimi’s action direction is bigger and more assured, and Alfred Molina’s Doctor Octopus is the best villain of the series, bar none. It’s so good that its greatness goes essentially without saying – what higher praise can I make of Spider-Man 2 than saying “It’s Spider-Man 2?”

When you hand a studio two of the highest-grossing movies of all time in a row, you’d think that would earn you the clout to finish the trilogy the way you’d want. Sam Raimi wasn’t afforded that luxury on Spider-Man 3, and was harangued into reworking his planned third installment to accommodate the marketing-friendly 90’s villain Venom into the storyline. The result of that and other studio-level interference leads to a deeply flawed and shaky film, but I still don’t think it’s as bad as all that.

What’s ironic (for me, at least) is that as much as Raimi openly despised Venom he wound up delivering a much more interesting version of his story than prior animated adaptations or even the original comics ever managed. I like that Eddie Brock is a sleazy-stalker mirror of Peter Parker, and I love that the film avoids the boring cliché of symbiote-suit afflicted “Evil Peter” being a cool badass. Yeah, “Emo Pete” is obnoxious and lame… he should be! That’s what a terminally-uncool dweeb like Parker would think acting like a cool badass would look like.

The film wound up being (to date) the highest-grossing Spider-Man movie ever, but even its fans tend to agree that it’s the least of Raimi’s trilogy. Raimi himself could barely restrain his obvious contempt for much of the production, and doesn’t even appear on the DVD commentary.

A review of this film was actually the second ever episode of Escape to The Movies, and looking back I think I might have been a little too kind to it. I still think it’s a perfectly fine film, but calling it a true successor to Evil Dead might’ve been pushing it on what’s ultimately a serviceable stylistic return to formula for Raimi amid a fairly average horror script. Also, “that bit with the cat” feels weirdly out of place – like Raimi the grown-up trying too hard to prove he can still shock for the sake of shocking.

Raimi’s latest, Oz The Great & Powerful, is now a major worldwide hit, and the Evil Dead remake opened with an impressive haul for a horror movie in the spring. His small-screen success has continued as well, with he and Tapert scoring another syndication hit (though not quite as big as Hercules or Xena) with Legend of The Seeker and a cult-smash with Spartacus on cable. At present, he’s once again talking about the possibility of a direct sequel to Army of Darkness, which may or may not establish some sort of “real” continuity between Bruce Campbell’s Ash and the heroes of the new Evil Dead.