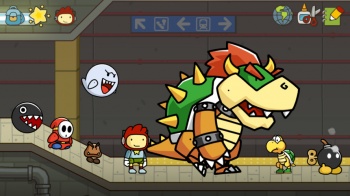 5th Cell, best known for the Scribblenauts franchise, has been hit with massive layoffs, and may even have been shut down.

Scribblenauts developer 5TH Cell has been hit with substantial layoffs, as their mobile game Scribblenauts: Fighting Words was cancelled by publisher Warner Bros.

Additionally, lead animator at 5TH Cell, Tim Borrelli, posted an ominous tweet on Monday evening that claiming the entire studio has gone under.

When others on social media asked for clarification, Tim Borrelli explained that layoffs were taking place at the company as early as last week.

. @MOOMANiBE I was part of the first round of layoffs last week. Today while I was picking my stuff up they shut the studio down :(— Tim Borrelli (@Anim8der) March 21, 2016

45 employees have been laid off, most likely due to the cancellation of the studio’s upcoming game Scribblenauts: Fighting Words, according to a statement from 5th Cell CEO Jeremiah Slaczka:

Unfortunately, due to a project cancellation, we have had to let go of 45 of our very talented staff members today. Layoffs aren’t something we take lightly and we’d like to thank all our employees for all the hard work and dedication over the years. 5TH Cell as a company is not closing down, but our focus right now is 100% on helping our staff make the transition to other external opportunities. If we haven’t already reached out, any interested employer can reach us at jobs@5thcell.com.

The Nintendo DS game Scribblenauts first arrived in North America back in September 2009, and was praised at E3 as a “Best of Show” game. On November 13 2012, Scribblenauts Unlimited launched on the Wii U, 3DS, and on PC on the 20th of that year, making the franchise available to a larger gaming audience. The last time we heard from 5TH cell was when they launched a Fig crowdfunding campaign for a new project, Anchors in the Drift. It’s unknown what plans 5TH cell has for this project, or anything in particular going forward.