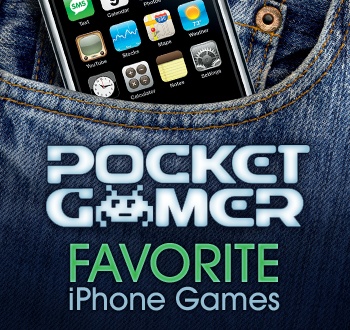 Nobody knows portable gaming better than the folks at Pocket Gamer, so naturally we asked them to get involved with our iPhone issue this week. They managed to tear themselves away from their DSi’s, PSPs and Game Gears (what?) to share their favorite iPhone games with us:

Not an eccentric choice, perhaps, but Fieldrunners remains the game I most often return to on my iPod touch. Granted, I have a predisposition for tower defense (geoDefense is another regular haunt) and had to stop engaging in last-thing-at-night Fieldrunners play due to a growing number of unhealthy truncated sleep sessions.

This near-compulsion shouldn’t be surprising – Subatomic Studios’s excellent command of tower defense fundamentals had announced itself from the moment Fieldrunners marched onto the scene. Any game that manages to keep you entertained for hours despite sporting an uncommonly thin features list and no sound (as Fieldrunners did in its earliest iteration) is clearly very special.

It’s been said that there are thousands of stories, but only a handful of plots. Squareball shows that the same is true of gaming, conjuring as it does fresh experiences from a range of sources.

A unique mash-up of elements from Super Mario Bros. and Pong, Squareball requires you to bounce a ball through treacherous environments that you move by sliding your finger across the touchscreen. With instant kill red blocks, massive gaps, and slowing quicksand spaces, new ideas meet old ones in a game that’s as clever as it is fun. 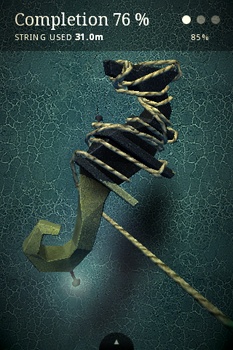 Not that game reviewers particularly need to chill out (it’s a reasonably relaxed lifestyle, you know), but Zen Bound (pictured) could soothe a drug-fueled insomniac John McEnroe. It’s a game of visual poetry that wraps your mind in nothingness while still managing to hyper-stimulate your gaming chakras.

The visuals are so tangible you could stand your iPhone on the sideboard with the game running, and tell people the strangely daubed object on the screen is an ornament carved by islanders out of driftwood found on a remote Polynesian beach. And on top of all this, the gameplay is so uniquely crafted to the Apple platform it should be embedded in the firmware.

The iPhone was made for this game – not the other way around.

For all the excellent iPhone titles out there, DrawRace is the only one that keeps pulling me back in for more.

It’s simple – sketch out a racing line for your little car to follow, staying mindful of the fact that the speed of your scribbling dictates how much throttle your car will apply. Go into a corner too fast and you’ll end up in a crash barrier.

Perhaps chief among DrawRace‘s achievements, though, is its ability to drag you back into the fray by telling you that you are better than X per cent of other people. You have no choice but to hit the “retry” button in a bid to creep up the rankings.

RedLynx has openly admitted that it nicked the topdown path drawing mechanic from Flight Control, mainly (I think) because the developer believes it has used it to produce something even more special. I’d have to agree.

There are few games you can be truly terrible at but still enjoy playing. For me, Doodle Jump is one such.

Bouncing the Doodler onto ever higher platforms as you slightly tilt your iPhone to control his next landing spot is a simple pleasure, and one that’s always a step away from failure, or a petty success eventually leading to failure.

Yet, the opportunity to land on a spring, a propeller hat, a rocket pack is enough to add spice. One day, I might even beat my paltry record height: something I’ll immediately send to Facebook. Yes, I’m a failure, but Doodle Jump is my failure, and I’m proud of it.

It’s not very pretty, it’s not an iPhone classic, and it universally fails to do anything new. Even so, Warfare Incorporated is still one of the best games I’ve played on the iPhone.

The touch controls are a dream, the campaign missions are perfectly balanced, and the wealth of user-generated content make it extremely good value for money. I haven’t played any other iPhone game more than this one and until EA gets busy with an iPhone version of Command and Conquer, I doubt I will.