I’m so tired of seeing perfectly-good movies stop so that I can watch a superhero sew.

There’s a moment of near-perfect visual storytelling in “G.I. Joe” (not technically a superhero movie, but trust me this is going somewhere) that encapsulates the entire film: Silly, yet sort of amazing. Amidst a massive conflagration in the good guys’ subterranean lair, Storm Shadow – the Evil Ninja – goes in to strike the killing blow on a helpless enemy, only to have his blade stopped mid-sweep by that of Snake Eyes – the Good Ninja. Caught by surprise, Storm Shadow instantly recognizes his opponent; triggering a flashback in which we see two young boys in Japanese-style martial arts training. “Brother!” exclaims the present-day Storm Shadow.

Practically, it shouldn’t work: How can anyone sneak up on someone during a fight in an open area the size of a small city? How can you recognize someone through a head-to-toe rubber body-stocking just by his ability to counter a sword maneuver? What does them training together as kids have to do with why they’re fighting now?

Of course, you and I and damn near everyone in the theater knows the answer: Because they’re ninjas. Ninjas are always invisible until they no longer want to be; ninjas can recognize people by minor body language; ninjas hold honor-grudges forever. If a math teacher or a short-order cook behaved this way in a fight (or any other situation, really) we’d likely not accept it. But ninjas? Not a second thought. “Everybody knows” that’s how things work for ninjas. In other words, the visual-storytelling works because it plays on the audience’s collective pre-acceptance of Ninja formula or, if you like, “tropes.” This is also why no one asks questions when two characters walk to the center of a street for an impromptu gentlemanly pistol-duel – so long as it’s happening in a cowboy movie; and why no one even bothers to remind you that zombies need to be shot in the head anymore.

Tropes have been with us forever (though the word has only come to mean “that” pretty recently.) In the wrong hands, they’re a way for the careless to pad a plot (see: Bay, Michael.) In the right hands, they’re a way to communicate information to the audience without having to break the rhythm for an explanation (“oh! He must be a bad guy, got it!”) In a master’s hands, it’s a way to execute a perfect fake out: “No way! The nicest guy in the group never gets murdered first!” You can tell that a genre is here to stay when it begins to have elements unique to itself that no one feels the need to explain anymore – when it begins to have its own tropes.

Much has been made recently of the oversaturation of movies based on comic book superheroes. While I certainly wish more of them were better, I welcome this oversaturation precisely because of the above-described concepts: I want the movie-going public to become saturated in superheroes so that the ability to utilize tropes will kick in – which, from where I sit, will help all superhero movies to streamline their narratives and deliver richer and more complex storytelling.

For me, nothing slows down even a good superhero movie than the constant need to explain recurring elements of the genre to the non comic-fluent mainstream audience; specifically, things like costumes, nicknames and gimmicks. In the comics, almost no explanation is necessary for such things because readers have been marinating in the tropes of the genre for about eighty years and already know the score: That in a Superhero Story, the first thing one does upon embarking on a vigilante or super-criminal career is to choose a nickname for oneself and construct a flamboyant costume. “Hm, I can jump pretty high… from now on call me RABBITMAN!” This sort of thing usually takes a single page, sometimes less than that. Why does Maxwell Dillon, upon gaining the power to throw lightning from his fingertips, decide to don a green and yellow costume and dub himself “Electro?” Because it’s a superhero story (Amazing Spider-Man #9, to be precise) and “that’s how it works in those.” 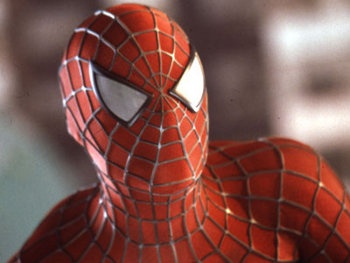 Superhero movie stories, on the other hand, have only become a (seemingly) permanent fixture of film and TV within the last decade, so the tropes haven’t quite caught on with everybody. As such, whenever a costumed character turns up whose “thing” isn’t self-explanatory (see: The Joker, Sandman) you’re almost guaranteed that the film is going to take time out to explain via background detail and plot-contortion exactly why they’ve opted to dress up.

Consider Catwoman. In the comics, there’s never really been a lot of time spent explaining why she dresses up like a cat. She’s a cat burglar, she’s a lady and she’s an antagonist in a superhero story, thusly she puts on a cat suit. Simple, basic, cut, print. In the movies? No such luck: “Batman Returns” piles heaps of cats and cat iconography onto everything surrounding poor Selina Kyle’s life until it becomes frankly ridiculous – all to make absolutely sure that no one in the audience can possibly ask “Where’d she get the idea for the outfit?” Oh, and despite being a frumpy cat-lady, she happens to own a stylish coat of reflective black rubber and possesses concussion-defying sewing skills so that no one wonders “where’d she buy that thing,” another question no one asks in comics.

And never mind just slowing down the movies, this need to over-explain these things means that some superhero stories just flat-out cannot be told: I’ll probably never see the current cinematic Spider-Man battle one of my favorite villains, The Rhino, because there’s simply no matter-of-fact reason for a man to dress up like a rhinoceros other than he’s a supervillain, and that’s what they do. And you can probably forget seeing folks like Mad Hatter or Mr. Freeze in Christopher Nolan’s ultra-realistic re-imagining of Batman.

But, slowly yet surely, things on this front seem to be changing. As superheroes spread themselves out over more and more of the action-movie landscape, you can see more films telling their stories confident that most of the audience will “get” that certain offbeat things happen in superhero movies just because: A cursory glance from his own stitched-up face to a billboard displaying puzzle-pieces is all it takes for “Punisher: Warzone’s” Billy Russoti to rechristen himself Jigsaw. Dr. Jonathan Crane is The Scarecrow because… well, he’s a weirdo and likes to do things in a scarecrow mask. Tony Stark paints his Iron Man armor “hot-rod red” because it’ll look more cool that way. “The Incredible Hulk” doesn’t know a lot of things, but he knows his name is The Hulk. This is why I’ll take stinkers like “X-Men Origins: Wolverine” or the Fantastic Four movies on-balance if it means that superheroes and their respective formulas become as ubiquitous to the modern moviegoer as Mismatched Buddy Cops or Hookers With Hearts of Gold.

Maybe it’ll never happen, but I’ve got a dream that one day I’ll sit down to watch a Spider-Man (or whoever) movie that opens with a big ol’ bank robbery carried off by guys like The Rhino, Scorpion, The Beetle, Shocker, Vulture… those kinda guys – and maybe The Ringmaster & His Circus of Crime for good measure – and after this brief in media res introduction we jump immediately into the kind of big, sprawling story we saw in “The Dark Knight”(not-coincidentally featuring the no-explanation-necessary Joker.) And everyone will be cool with that, because nobody will be wondering what traumatic event in Rhino’s early life involved an actual rhino, or where Shocker picked up his fabric samples.

Because they’re supervillains and it’s a Spider-Man movie and that’s just how things work in those.

And it will be awesome.

Strut Your Stuff in Project Runway: The Video Game

Get a DJ Hero Hands-On at GameStop This Sunday