Yesterday we did some poaching, murdered a family pet, accidentally pinned the blame on some other guy, then killed him, then got paid for it. That’s a pretty good day in my book, but now Norman thinks we need to flee the region for a while. So now we’re in the human city of Stormwind. Norman is here to gather his things and get ready to leave for good. He also stops at the shops and puts some of his hard-won adventuring money to use.

“Hey, you got yourself a new dress!” I tell him. 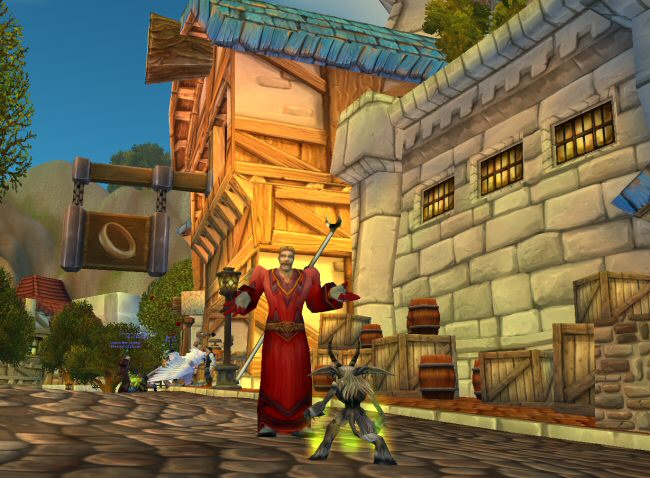 “Don’t be so hard on yourself,” I tell him. “It’s pretty no matter what you call it.”

“It’s hard to be manly when you have to dress like this.”

“I thought … This is part of being a warlock. It’s in the rules. I just assumed it was something demons wanted.”

“Nah. You idiots came up with that on your own.”

“Look, the only thing we demons care about is devouring souls and destroying worlds. The dark robes, midnight gatherings, virgin sacrifice, cutting yourselves, memorizing oaths to fallen gods … that’s all stuff mortals added so they could feel like they were doing something really dangerous and illicit. You guys have to make everything so complicated. Power for souls. That’s our business. You guys can dress it up however you like.”

“I guess I feel sort of stupid wearing this robe then.”

“There’s a good reason for that,” I say.

We leave town and head west. We’re headed for Westfall, where Norman hopes he will find people in need of help. 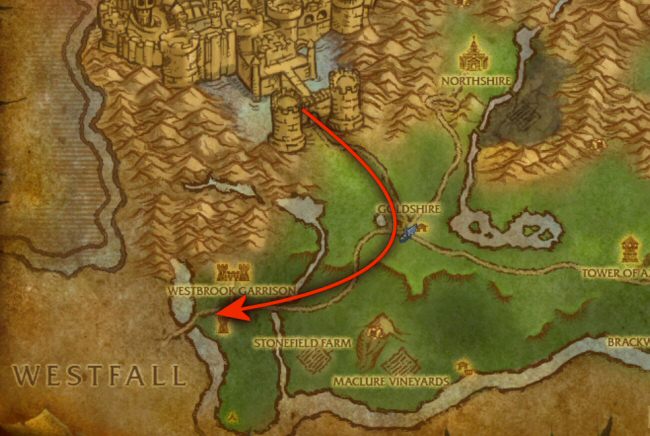 Along the way, Norman runs off the path and starts digging around in the weeds.

“Why are you picking flowers?” I ask. 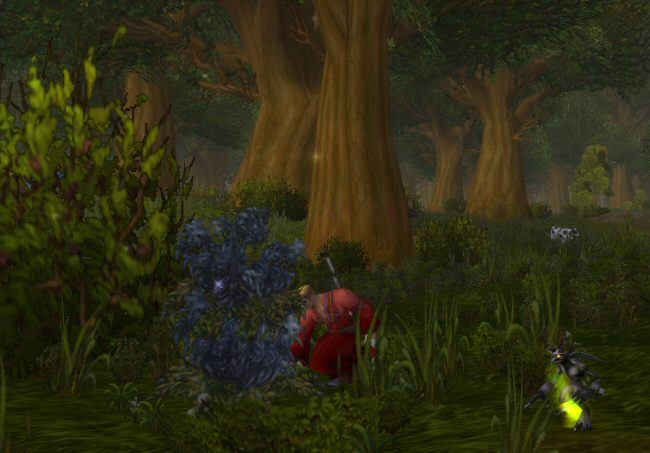 “And Alchemy. Picked it up in mage school.”

“Wow. You know Alchemy?” I’m actually kind of impressed by this news. “What kind of potions can you make?” I ask.

In most crafting professions, the first-tier of stuff is hilariously weak. It does get better at higher levels, though.

“Let’s say you got impaled on a spear,” he explains. “This potion would reduce the redness and irritation around the entry point, at least until you can find someone to pull it out. I’ve also got another one that hardens your skin, so if someone wanted to impale you they would have to push 1% harder.”

I shake my head, “Wow, I didn’t realize you were horrible at other things before you went on to be horrible at magic. You’re a real jack-of-sucking-at-all-trades.”

“You sound like my mother,” he whines. “She’s never been happy with anything I’ve done since I decided not to become a paladin.”

“I’m not here to help you with your personality problems. Let’s find someone to set on fire.”

“We don’t need to immolate everyone we meet, you know.”

“Hey, if people didn’t want to be set on fire, then why do they make such hilarious sounds when you do it? That’s practically asking for it.”

“I don’t think they make those sounds to entertain us.”

“Well, I appreciate the effort they put into it anyway.” 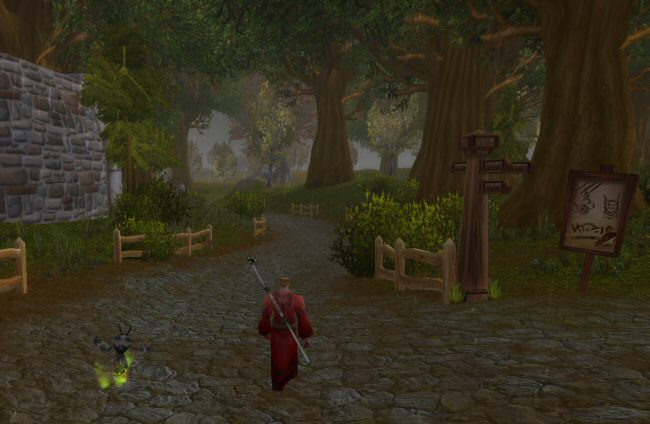 On the edge of Elwynn forest we come to a garrison.

“Maybe we should see if they have any jobs posted,” Norman mutters to himself. “You know, before we leave Elwynn for good.”

There is a job: 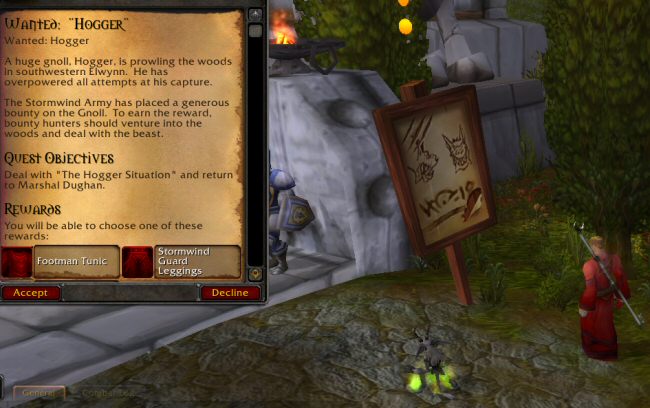 Interesting note is that this quest is marked as a [group] quest in your quest log, but the quest description doesn’t say anything about it being a group job or suggest what size group you should have. Looks like a regular old solo quest if you read the description.

Kind of odd. Still, Hogger is a handful and taking him on solo would be very foolish.

“Erm. I think it’s kinda like a pig-man,” Norman says. “They’re not too dangerous. They’re only about waist high.”

We plunge into the forest and slaughter our way to Hogger’s camp. It turns out he’s a good bit taller than “waist high”. 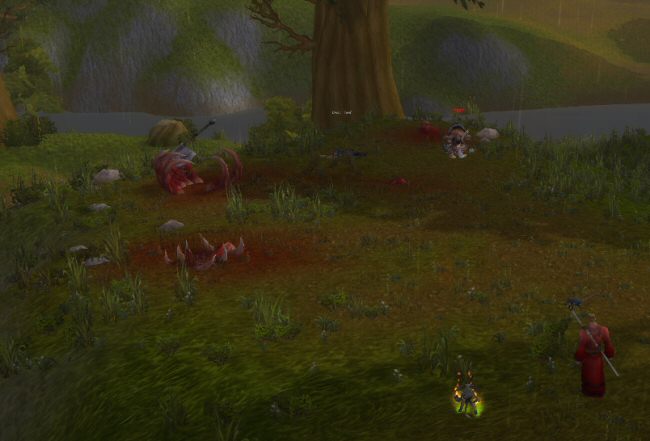 “He’s very large,” Norman says nervously. “Ah well, I’m sure the guards wouldn’t have posted it if it was too big a job.”

Norman formulates a detailed battle plan and draws it into the dirt:

1) He sets Hogger on fire.
2) I distract Hogger with a fireball.
3) Norman begins rending Hogger with tendrils of malignant shadow magic.
4) I continue to confuse Hogger with fireballs.
5) Norman heals himself by draining away the last of Hogger’s life energy.

We edge around Hogger’s camp and find a good defensive position. Then Norman launches the attack. It goes something like this:

1) Hogger runs over and begins stabbing Norman.
2) Norman closes his eyes and swings his staff around while making little-girl noises.
3) See number two.

Somehow Hogger gets slightly injured by this process. So he calls for help. 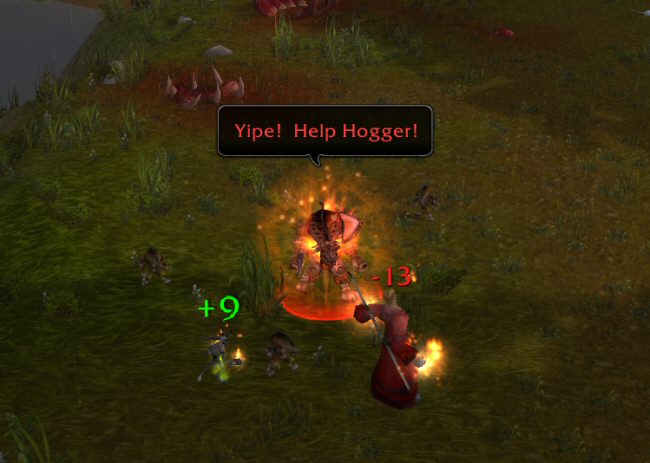 So now we have a little cluster of tiny Hoglings to fight. Things start to look grim. I won’t get credit for Norman if he dies before turning to evil, and I’d hate to see all of my half-assed efforts go to waste. 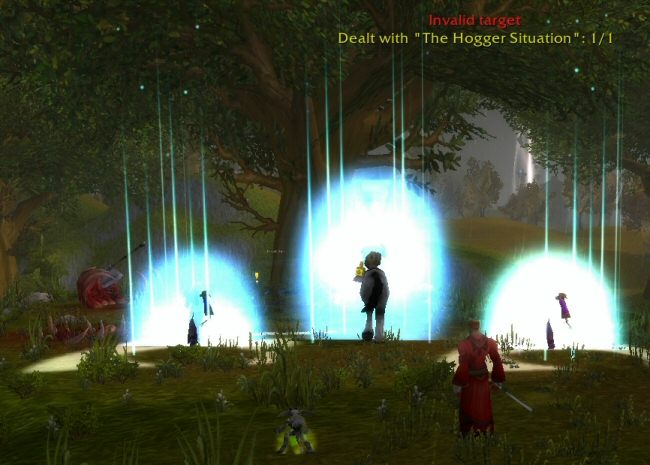 Just before things turn bad, a bunch of guys teleport in.

This is something Blizzard has been doing more of lately, putting cutscenes into their MMO. There are now three different kinds of cutscenes:

1. The pure cinematics. (Awesome.)
2. The in-game cinematics where the game grabs the camera and shows you a voice-acted scene. (Rare, and usually short.)
3. The in-world “scenes”, where a bunch of NPC’s stand around and emote and type to each other. These are a nice try at making the world immersive, although they don’t really work for me. The text bubbles hang around long after you’re done reading them, which takes an epic moment and makes it stiff and poorly paced. And the bubbles tend to overlap. And it’s not always clear where you should be looking. It’s like being the cameraman when you don’t know the script.

Some high-ranking general has come, along with a couple of mages. Also, a couple of kids came along, so they could cheer him on. 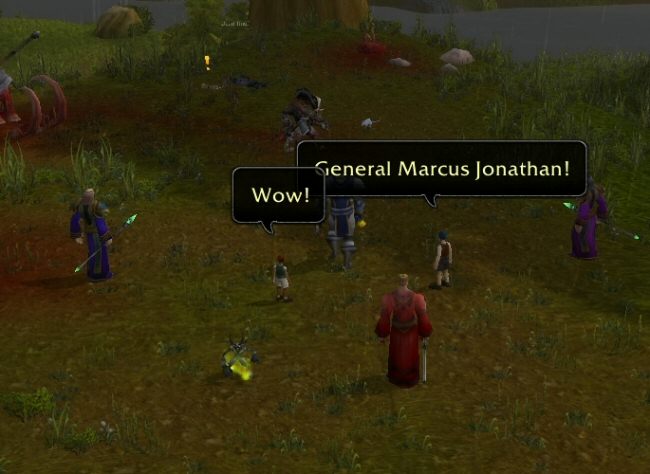 “You brought your underage fans into battle with you?!?” Norman shouts to the guy.

The General ignores him, and captures Hogger. 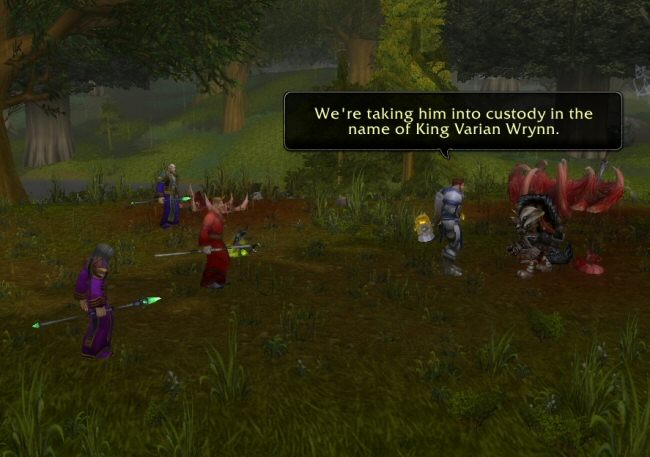 “You’re arresting a GNOLL?!?!” Norman shouts. He is red-faced with rage. “Yesterday the job board had me killing a human for … something. Don’t worry what it was for. The point is, he was probably a bad guy but nowhere near as bad as this demon-gnoll you’re trying to arrest. What the hell is wrong with you?” 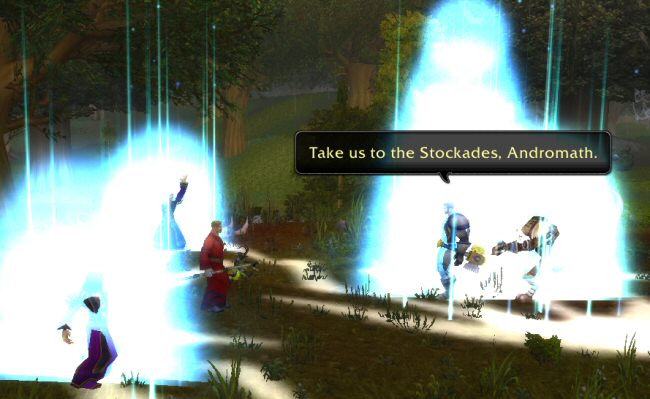 The general, his prisoner, his mage backup dancers, and his adoring fanboys all teleport away, leaving us alone in Hogger’s camp.

“Looks like the General came in and ninja’d your kill, boss.”

“We’ll see about this!” he says with fury. And then he marches us back to Goldshire. He elbows his way through the crowd, shouting at the idiots that get in our way, “Move it, freak. No thanks, I don’t duel people that drool on themselves. Put some clothes on, you degenerate.” 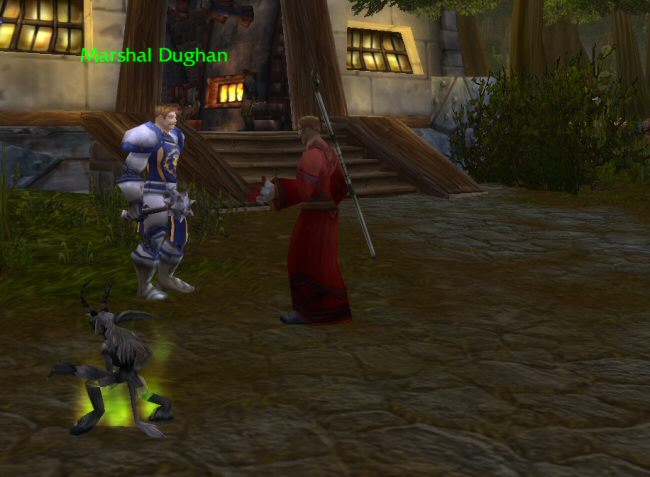 “Greetings, citizen,” says Marshal Dughan. “How can I-“

“So the General can teleport in, arrest people, and then teleport them directly to the stockades?” Norman cries angrily.

“So WHY did you post Hogger to the job board, then? Why waste my time if the general was just going to arrest him?”

“He did WHAT? Great, now we have a bloodthirsty beast right beneath the streets of Stormwind, with a whole army of gnolls at his command. Definitely an improvement, I feel safer already. Here’s your reward. But promise me you’ll check in with the Stockades guards in Stormwind at some point, just to ensure that things are going smoothly.”

You know I would not lie to you: 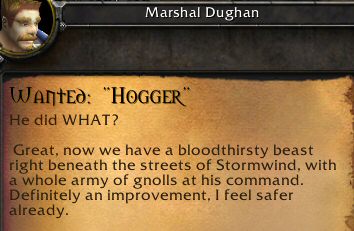 “Waaaait a second,” Norman says slowly. “Are you saying Hogger is TOO DANGEROUS to be kept in our own stockades?”

Dughan gives one of his little shrugs.

“THEN WHY DID YOU POST IT TO THE JOB BOARD? You’re telling me this job was piss-easy for the general, and too dangerous for me, and it’s a pointless waste of time anyway since he’ll just escape!”

“Thank you. I hope you die in an avalanche of Kodo waste.”

This quest is actually a set-up for a dungeon you can run later. The Stormwind Stockades are one of the lower-level dungeons in the game. You can go there in your twenties and fight some bosses. I haven’t done them, but I’ve read that the quest to go in and kill Hogger is level 30-ish. In case you’re wondering, the quest we just did was level 11.

We leave town in a hurry. Someone stops us along the road to ask for help, and Norman cracks them on the shins with his staff as we jog by.

“Nice follow-through on that one, boss.”

We head west, making for Westfall.

For those of you who haven’t played WoW before, let me try to give you a sense of scale. So far, this entire write-up has taken place inside of a single zone, Elwynn Forest: 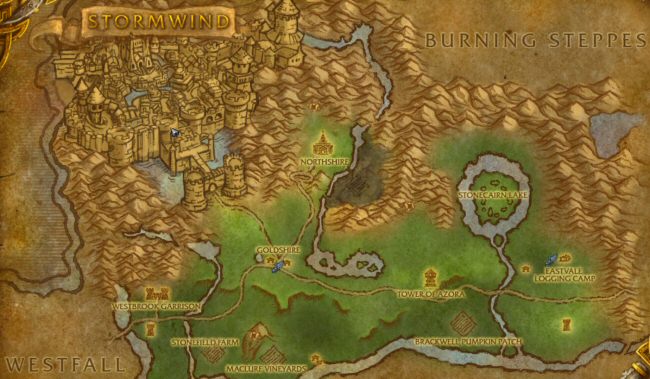 Elwynn Forest is but one small zone within the Eastern Kingdoms. The highlighted zone below is Elwynn: 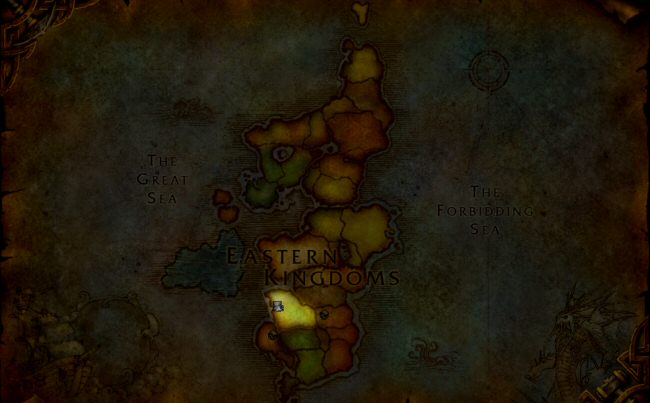 And the Eastern Kingdoms is just one of three continents on Azeroth: 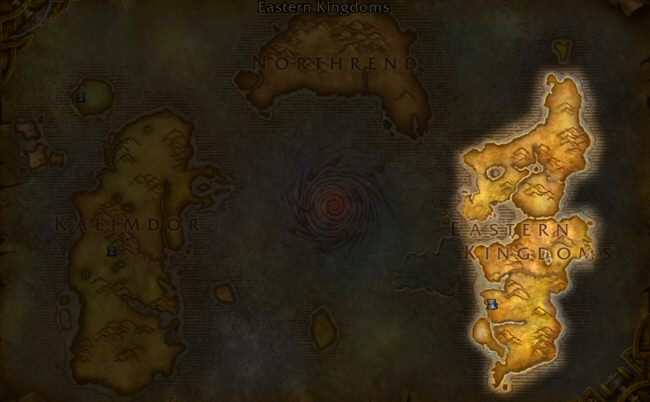 And Azeroth is one of two worlds in the game. The other, Outland, isn’t quite as big as Azeroth, but it’s still huge. and there are a couple more high-level continents tucked away here and there that I haven’t even visited yet.

All of these zones have vivid and unique scenery. Okay, buildings and types of trees get re-used from time to time, but there’s a lot of variety and I’ve never really felt like one place was just a recycled version of another. In our story with Norman and Gobstab, we probably won’t see more than three or four zones in the game. Speaking of which, they’ve just arrived at our second zone… 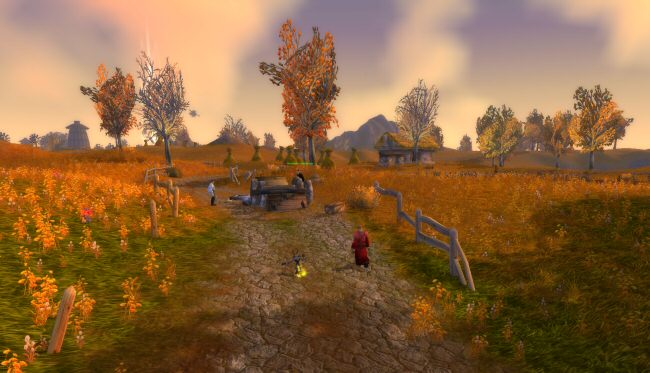 Westfall. For some reason, crossing the river has moved us from eternal summer to eternal autumn. Whatever. Not my problem.